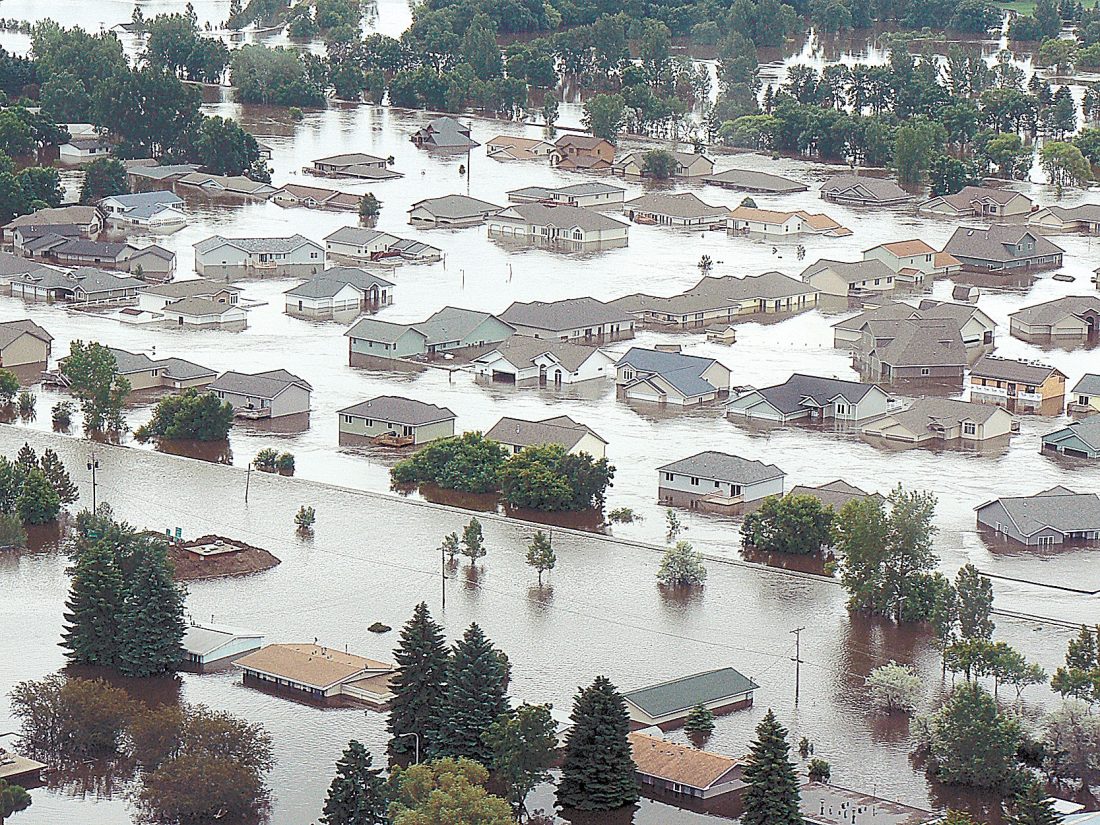 File Photo A neighborhood of homes is shown underwater during the flood of 2011. The City of Minot plans to appeal the hydrology behind a FEMA floodplain map that would have insurance implications for many homeowners who flooded in 2011.

Appealing the latest federal floodplain map is a gamble, but the Minot City Council determined Tuesday the potential pay-off makes the cost to pursue it worth the risk.

The Federal Emergency Management Agency released a flood map for Minot that establishes the base flood level at 10,000 cubic feet per second of river flow. The city is challenging that level, arguing it should be 8,000 cubic feet per second, which would take numerous homes out of the flood plain. Flood plain status has impact on flood insurance requirements and cost.

Without a delay brought by an appeal, the map would go into effect in early 2021.

There’s no guarantee of success, and an appeal denial would leave the city out about $250,000 in appeal costs. However, City Engineer Lance Meyer said, a successful appeal can translate into thousands of dollars of savings in insurance premiums over many years until the enhanced flood protection project is built.

“It’s a risk that the city needs to take, just looking at the potential impact. You know it might be less than a 50/50 shot at this, but I think if we have an opportunity for impact as large as this to the community, we should probably take it,” he said.

Minot loses only if its appeal is denied quickly, which the council determined is unlikely. The city plans to challenge the map’s hydrology assumptions about water storage upstream, which are based on international dam operation agreements. The city will argue that the reality of dam operations in potential flood years is to draw down below prescribed levels to hold back more water.

The city has 90 days once the clock starts in a few weeks to submit its documentation to FEMA. It is unknown how long it will take to reach a decision in the appeal.

“It’s going to be quite an undertaking. It’s reconstructing all the engineering studies that they have done over the last several years,” Meyer said. “That appeal process could be a few months long; it could be likely at least six months. It could be a couple years.”

Mayor Shaun Sipma presented his calculations of the benefit of spending about $250,000 on an appeal that might delay map implementation.

In two years, the average premium would be just over $800 with the anticipated premium increases, Sipma estimated. That’s around $1.6 million in premiums paid in Minot in 2023, he said, using rough calculations. Assuming a 10% increase in numbers of residents carrying insurance, that number could jump to $1.82 million.

If map implementation is delayed, the total premium would only be $1.08 million in 2023, reflecting a significant savings even after subtracting $250,000 spent on an appeal, Sipma said.

“This is all making the assumption of a two-year delay. If we only have a one-year delay, we would still see – at least at this level – savings, in my estimation,” he said.

Sipma also noted the savings isn’t just to those in the flood plain. He explained if the value of homes in the valley declines as flood insurance premiums rise, a greater share of the tax burden will fall on homes outside the valley.

“So that inversely would impact the entire community,” Sipma said.

Council Chairman Mark Jantzer asked if the city would have more at risk than a potential $250,000.

Meyer replied there is additional risk, although slight. The U.S. Corps of Engineers or other agencies might see the city’s purported lower flow rate as negating the need for some of the proposed flood control project components. That could jeopardize efforts to obtain federal funding for portions of the project, he said. Should that slim risk materialize, the city would have to consider withdrawing its appeal, he said.

Jantzer also asked about the confidence level in the 8,000 cfs argument that the city is supporting.

“I guess if we’re going to roll the dice on a quarter million dollars, we sort of want a sense of some of that,” he said.

“We do think there are some things that that are valid and that should be challenged,” Meyer responded. “We have some issues with the way that they did it just because they’re very conservative. So, from FEMA’s standpoint, they’re happy because they like the conservative number. From our standpoint, conservative means that we have a higher flow rate; there’s more properties in the 100-year floodplain.”

Council member Josh Wolsky wanted to know that the city’s appeal would get a fair look. Meyer said the expectation is that the appeal could end up before a scientific review panel, consisting of five technical experts.

“We’ve had so many people look at all this data. There’s really no one left to send it to but the scientific review panel,” he said.

“That creates a level of comfort for me that we’re going to be able to articulate our argument, and let the decision and the science follow where it may,” Wolsky replied.

The council voted to authorize the appeal and negotiate project scope and fee with Ackerman-Estvold to handle the appeal. The council also appropriated funding from reserves in a sales tax fund.

According to engineers, the appeal will affect not just Minot because changing the hydrology data has implications throughout the Souris River Basin.