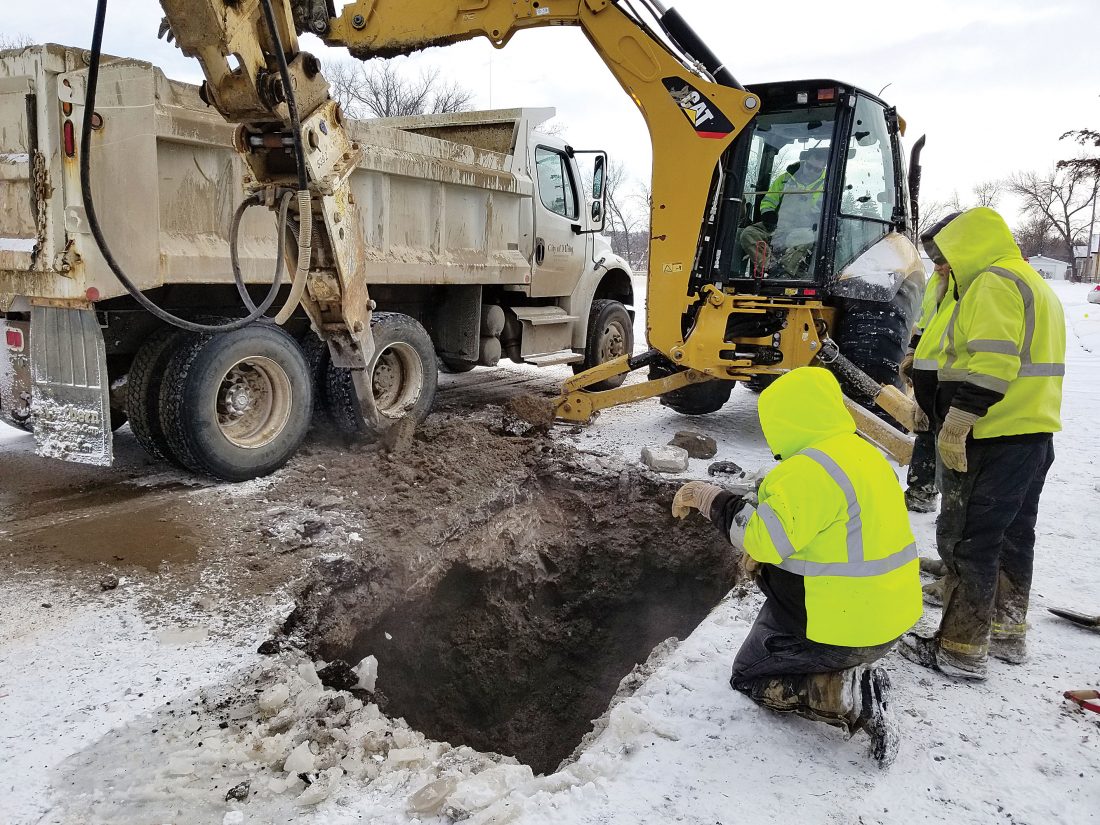 Kim Fundingsland/MDN A City of Minot crew works to repair a broken waterline Wednesday afternoon in the northwest part of the city. Despite extremely cold weather all effort is made to restore water service to affected areas of the city as soon as possible.

There could hardly be a worse time for city crews to be working outside. Despite sub-zero temperatures, wind and wind chills warnings when a waterline breaks it needs to be repaired. No matter what the weather conditions.

City crews have had to deal with a couple of recent waterline breaks in the city the past few days. The work is necessary to restore water to affected city residences in as timely a manner as possible. Unfortunately, frigid weather makes the repair more difficult.

“It’s a mess when we have a water break in the wintertime,” said Kevin Braaten, City of Minot street superintendent. “Most waterlines are about seven feet deep.”

Often a deep frost is to blame for waterline breaks, but the frost depth remains generally two to three feet. However, the recent onset of cold weather is expected to accelerate frost formation which could lead to further underground troubles for city workers in the coming weeks.

“Eventually that frost shoves down and creates problems all over the town,” said Braaten.

It is unknown when or where a frost-related problem with an underground waterline will occur, just that it needs to be repaired as soon as possible regardless of the weather. One city crew was working on a broken line in the 300 block of 17th Street Northwest Wednesday afternoon.

Snow removal has also been an issue for the city in recent days with crews sent out to clear streets following a couple of seemingly minor snowfalls. Generally all that is needed following a light snow is sand trucks, but the recent accumulation was enough to require a different response.

“When we get about three inches we send the blades out,” said Braaten. “Wednesday we were doing all the snow routes and hills.”