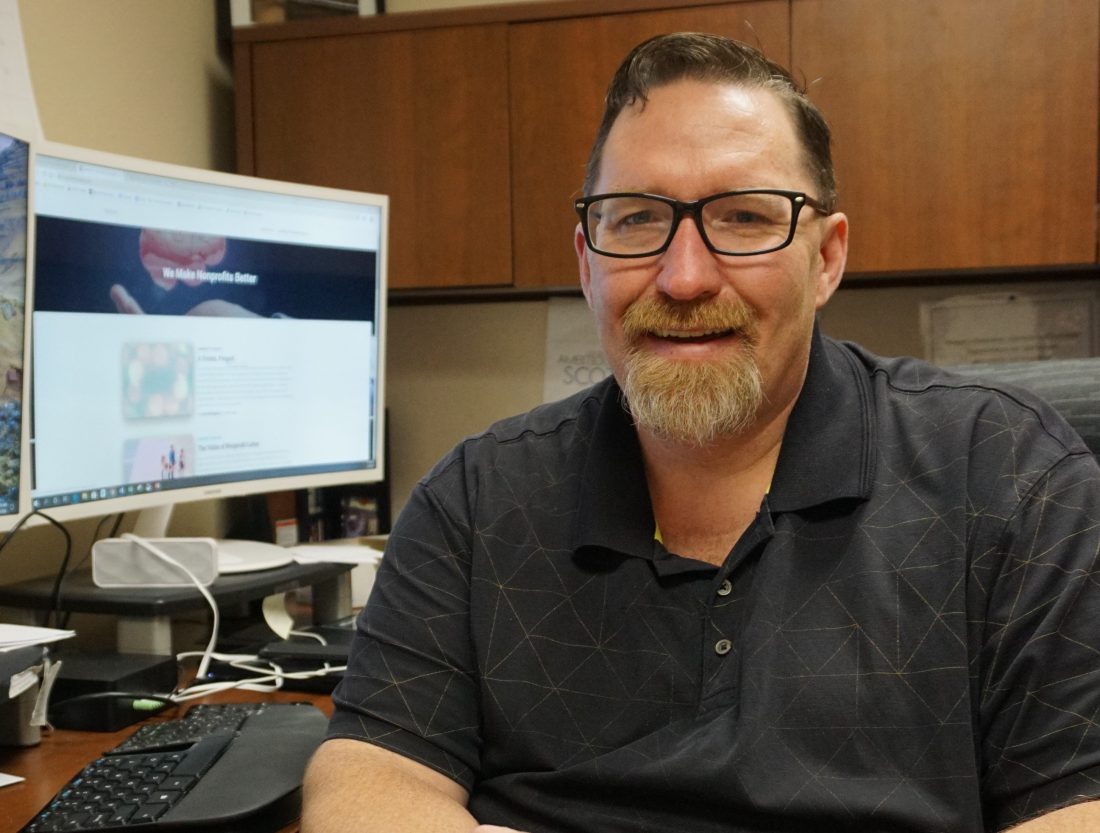 Empowering people and engaging communities is Scott Burlingame’s strategy for making a difference.

The executive director for Independence, Inc., in Minot, Burlingame has nearly a 20-year history of advocating for people with disabilities. His mission is to share his knowledge so more people can successfully do the same.

Burlingame said his passion comes from personal experience. In addition to having had a brother with a significant disability, he received services in school for a learning disability and has dealt with depression and anxiety as an adult.

Burlingame grew up in Arthur and furthered his education at different colleges, eventually ending up at the University of Mary in Bismarck. He worked as a job coach for people with disabilities in college and later worked in service provision.

He joined Independence, Inc., in September 2010, coming from a similar organization in Cass County, where he had spent 10 years.

“We work to help individual people to achieve their goals, to live independently in the community and to become empowered and full participants in our community,” Burlingame said. “The flip side of that is our community side or community advocacy side, which is to make Minot and our surrounding communities better places to live, work and play for everyone.”

The organization focuses on five core areas of employment, housing, transportation, education and transition and prevention from institutions.

The latter might involve assisting nursing facility residents to return home or aiding people at risk of nursing home or other placement to remain in their homes. Independence, Inc., has seen its caseload increase related to assisting people at risk of jail or prison and assisting incarcerated individuals to successfully return to their communities.

“So we’ve been providing a lot of services to people with behavioral health, including addiction issues,” Burlingame said.

Other services in the core mission might have staff teaching individuals how to use public transportation or ride services, obtain a driver’s license, find or maintain housing, buy a home or land a job. Independence, Inc., offers a training program in 22 area high schools that every year prepares more than 200 students with disabilities for adulthood through education on matters such as employment or housing.

Last year Independence, Inc., which is overseen by a nine-member board, served more than 650 people with its staff of 10. Independence, Inc., is primarily funded through state and federal sources, although donations and the grant-writing Burlingame does also play a part.

In his role, Burlingame can be found at city council meetings or visiting with business people to develop relationships within the community.

One way the organization has used its advocacy function in the community is through the Shovel for Independence initiative. Independence, Inc., found partners in the business arena to help advance the initiative, aimed at ensuring sidewalks are cleared from snow to allow both abled and disabled pedestrians the chance to get out and become involved in the community.

When Independence went to the city council a year ago to promote Shovel for Independence, the organization brought 10 people with disabilities as advocates. They also sent out volunteers to give away door hangers and talk to businesses about the initiative.

Burlingame has been active with Minot’s Alliance of Nonprofits, which developed about a year ago out of the former Alliance of Foundations.

“That’s one of my favorite things that I’ve the opportunity to do in the last year,” he said. “In the last year we’ve been able to kind of take it to the next level and really engage the nonprofit community in learning and in collaboration and just kind of raising the profile of that sector a little bit. Seventeen percent of our workforce work in the nonprofit sector, but far too often I think they’re not really at the table when we talk about community and economic development.”

“It was pretty special to get an award like that from my peers,” he said. “The people that are involved in the alliance are the first people I go to when I’m frustrated because they get it. They’ve been there. We celebrate successes together as well, so it’s an extraordinarily important group.”

Burlingame was seeking a way to take that discussion with peers to a larger audience when he started his blog at nonprofitthoughts.com just over a year ago. He said his goal is to create conversations around management and leadership and what it takes to make a nonprofit successful. The blog has included guest writers and his eight-part podcast with different nonprofit leaders.

“I enjoy writing and I write on a pretty regular basis. I write for our newsletter here, but I just wanted the opportunity to kind of share my thoughts and engage people,” he said. “A lot of times in our sector, we get people who are super, super passionate about our mission, but perhaps lack some of those administrative skills. Well, without the administrative skills, it’s really hard for you to achieve your mission. So I’m just trying to help people with that.”

“With that amount of turnover, how do we help empower that next generation to be successful in their jobs, and how are boards that are making those hiring decisions to know what to even look for in a nonprofit leader?” he said. “We’ve gathered up this knowledge, so how do we help out the next people? When I was coming in, I had a lot of people help me out and it’s a way I can pay back those folks a little bit, too.”

Drew Hanson, fundraising director for Prairie Grit Adaptive Sports and board member for Independence, Inc., is one who has benefited from Burlingame’s mentoring.

“Scott has really taken a very, very huge leadership role, not only in the nonprofit community but just for me personally,” Hanson said. “When I first joined the board of Independence, Inc., I had no experience even being on a board or in the nonprofit community, so I really leaned on him a lot for that first year or two. When I took the position at Prairie Grit Adaptive Sports, he was very influential in my growth as a nonprofit leader.”

Specifically, working with Burlingame opened his eyes to the resources for people with disabilities, like himself, that he didn’t know were available, Hanson said.

“He’s really taught me a lot in that respect,” he said. “A lot of people look up to Scott. He’s a very, very good leader and voice for the nonprofit community.”

Burlingame said he doesn’t consider himself an expert. But he does have his experience to share with others. Long-term, Burlingame would like to turn his career to nonprofit mentoring and consulting.

Meanwhile, he serves where he can.

Burlingame was elected last October as chairman of the Association of Programs for Rural Independent Living, a national grassroots advocacy organization for Centers for Independent Living in communities of populations of 50,000 or less. He is a recipient of the organization’s Earl Walden Award for Outstanding Achievement in Rural Advocacy.

He serves on the North Dakota Association of Nonprofit Organizations, Affordable Housing Developers Inc., based in Dickinson, and the Minot Area Recovery Community Organization, which is focused on addiction issues.

He was appointed by the governor to the state Independent Living Council, which oversees the funding distribution for independent living centers and generates discussion around issues related to disabilities.

Burgum also appointed him to the state’s Olmstead Commission. The commission tracks compliance with a 1999 U.S. Supreme Court decision establishing a right to community-based services rather than institutional care for people with disabilities.

“These are all really cool opportunities that I get,” Burlingame said. “I was a kid that grew up in generational poverty. I grew up with a learning disability. I’m pretty aware that my story probably shouldn’t have happened. Because I’ve been able to kind of carve out this life for myself, I feel an obligation to do everything I can do to bring as many people along with me as I possibly can.”