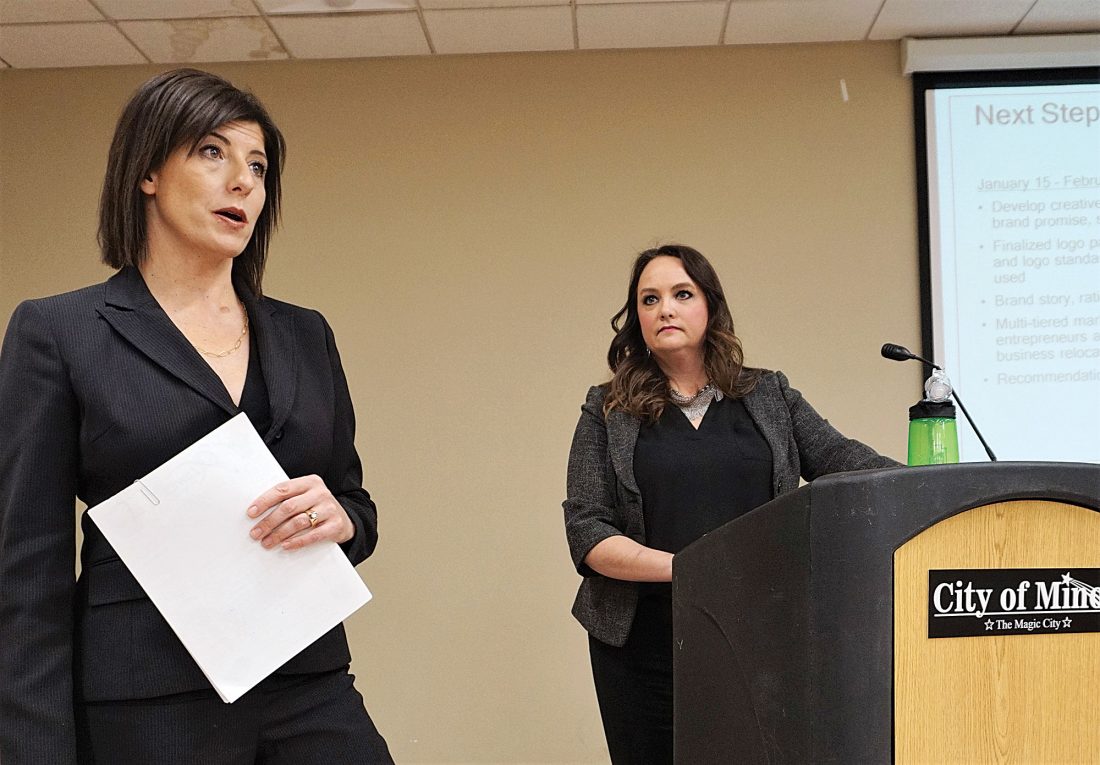 Most Minot-area residents are happy with their community, according to a recently released survey. They also want to see more investment in healthcare and infrastructure but view the city as doing well with employment, education and quality of life.

On Monday, Odney presented results of a public perception survey conducted Nov. 5 to 15 to community stakeholders with interest in Minot’s One Brand Campaign. The One Brand marketing campaign being developed is meant to create a strong identity throughout the community and generate a positive message to attract and retain businesses and residents.

“Any good marketing project is based off of data,” Visit Minot Executive Director Stephanie Schoenrock said in explaining the need for a survey. “This is far too critical a project. We have far too great of an opportunity at hand to be going off of gut instincts.”

Brekka Kramer, a vice president at Odney, noted that perceptions of Minot are largely positive, despite the negative voices that tend to be heard.

“A positive for our community is that we’re not only seen as somewhat favorable or very favorable, but the fact that we are seen as growing and improving is a positive,” Kramer said.

The survey found more than 86% of respondents view Minot favorably, and two-thirds consider Minot to be growing and improving.

“A lot of times with market research, there isn’t anything that jumps out that we didn’t expect, but it does kind of give you a sense for what the conversation is or what the tone of the community is,” Kramer said.

According to the survey:

— Health care and infrastructure are seen as the highest priorities, followed by flood protection, new schools and community facilities and events.

— Asked to list an area where Minot needs to improve, the highest response was roads and traffic, 13.6%, followed by city government/leadership, 12.9%.

— Family ties or having been born and raised in the area accounted for more than 50% of residents choosing Minot as home. Job opportunities attracted another 29.2%.

The survey included 411 respondents, of whom 80% lived within Minot. Just over 60% were homeowners. Of those surveyed, 50% had lived in Minot more than 20 years. Only 16% had lived in Minot five years or less. The poll had a margin of error of 4.8% with 95% confidence.

In ranking how well the city is doing, respondents gave the lowest ratings to business recruitment and retention, community leadership, affordable housing and cost of living. The highest ratings went to the city’s success with employment, education, parks and quality of life. Safety and crime rate, retail shopping, downtown and recreation fell in between.

The next step is to dive into the data with community stakeholder groups, Kramer said. That phase is expected to begin in January and continue through February. With that feedback, Odney will be helping develop messaging, a logo, brand promise, slogan and other elements of the campaign. The next public release of information could happen in March.

The campaign development was allotted $300,000 from the MAGIC Fund.

“We are committed to making every dollar work,” Schoenrock said. “One way is to provide some tools to community organizations so they can do a better job to communicate. The core group here is Visit Minot, Chamber, economic development and the city, but as you know, it goes beyond that, and it needs to go beyond that.”

Schoenrock added a goal of the project is to instill a sense of pride in the community. She said having a marketing campaign won’t be effective if there’s a negative atmosphere within the community that counters the campaign message.

“We have some really good things happening,” Kramer said, citing the work being done even in areas where respondents indicate they want investments or improvements. “So this is an opportunity for us to serve as a catalyst to move forward.”