Health officials say not too late to vaccinate 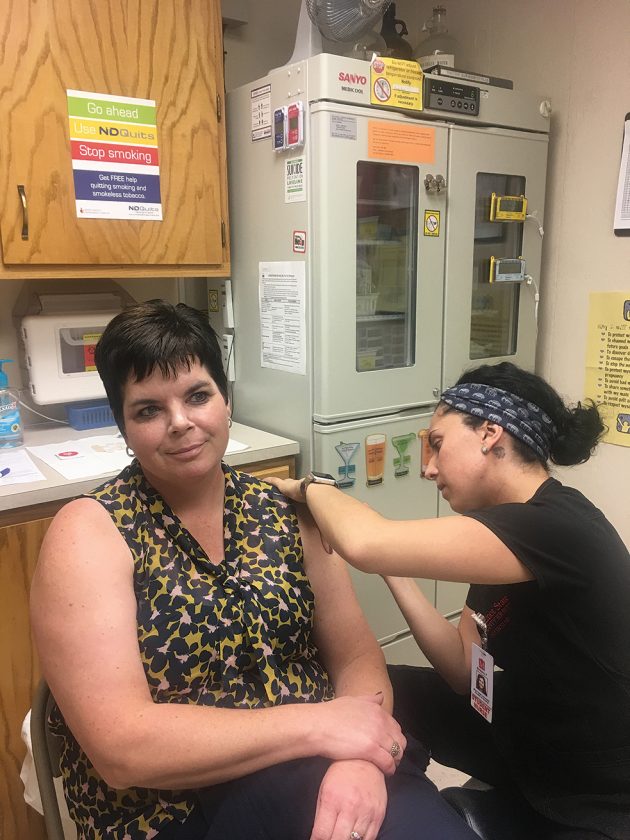 The number of flu cases in Ward County and North Dakota picked up in November, and health officials are encouraging residents to get vaccinated before the holidays.

This week is National Influenza Vaccination Week. Everyone ages 6 months and older should get vaccinated, according to the North Dakota Department of Health.

“A good portion of the state is seeing flu, particularly in the northwest corner and east in Cass County,” said Levi Schlosser, epidemiologist and influenza surveillance coordinator with the NDDoH in Bismarck. “I would like to stress that it’s not too late to get your flu vaccine. This year is no different than any other year, but we would like to see those (vaccination) numbers rise because it’s the best way to prevent yourself from getting the flu.”

As of Nov. 23, preliminary data show about 45% of state residents aged 65 or older had been vaccinated. That age group had the highest rate, while residents aged 19 to 49 had the lowest rate at 17%. North Dakota’s immunization rate last year was 32.9%, which was similar to the national average.

North Dakota is seeing early influenza activity, with 271 laboratory-identified cases reported to the NDDoH so far this season. Last year at this time there were more than 400 cases, due to an even earlier appearance of the flu that fall.

Preliminary data through Nov. 23 showed 11 confirmed cases in Ward County, according to the NDDoH.

Last year, the state saw 7,946 confirmed cases of the flu and recorded 23 deaths. Not all flu instances are confirmed with medical visits so actual numbers would be higher.

Signs of flu include cough, sore throat, runny or stuffy nose, muscle or body aches, headache, fatigue, chills and possible fever. Most healthy adults may be able to infect others beginning a day before symptoms develop and up to a week after becoming sick. Some people, especially young children and people with weakened immune symptoms, might be able to infect others for an even longer time.

Another reason to get vaccinated is to protect others who may be medically unable to become vaccinated, Schlosser said.

“It stops the likelihood they can catch the flu from you,” he said.

The NDDoH states it is especially important for people who are at greater risk of complications from the flu to be vaccinated. These include young children, older adults, those with compromised immune systems or chronic health conditions, pregnant women, American Indians, or Alaskan Natives. It is also important for those who spend time around anyone who is high risk for flu complications.

A high-dose vaccine is available for people aged 65 and older. The higher dose has been shown to increase antibody response in this age group.

The flu vaccine takes about two weeks once administered to provide full protection. There is an adequate amount of flu vaccine available this season, the NDDoH reports. To get vaccinated, people should contact their local public health unit, health care provider or pharmacist.

It is too early in the season to determine how effective the current vaccine might be against active flu strains, Schlosser said. According to the Centers for Disease Control and Prevention, the vaccine was updated this year for the A strains of the virus and remains the same for the B strains.

North Dakota typically sees a peak in flu between January and March. Last year, the NDDoH considered the peak to be the last week of March, although the previous year, 2017-18, saw a peak at the end of January and a higher number of total cases, with 8,498.

Besides getting vaccinated, hand washing thoroughly and often with soapy water is one of the best ways to prevent the spread of germs, Schlosser said.