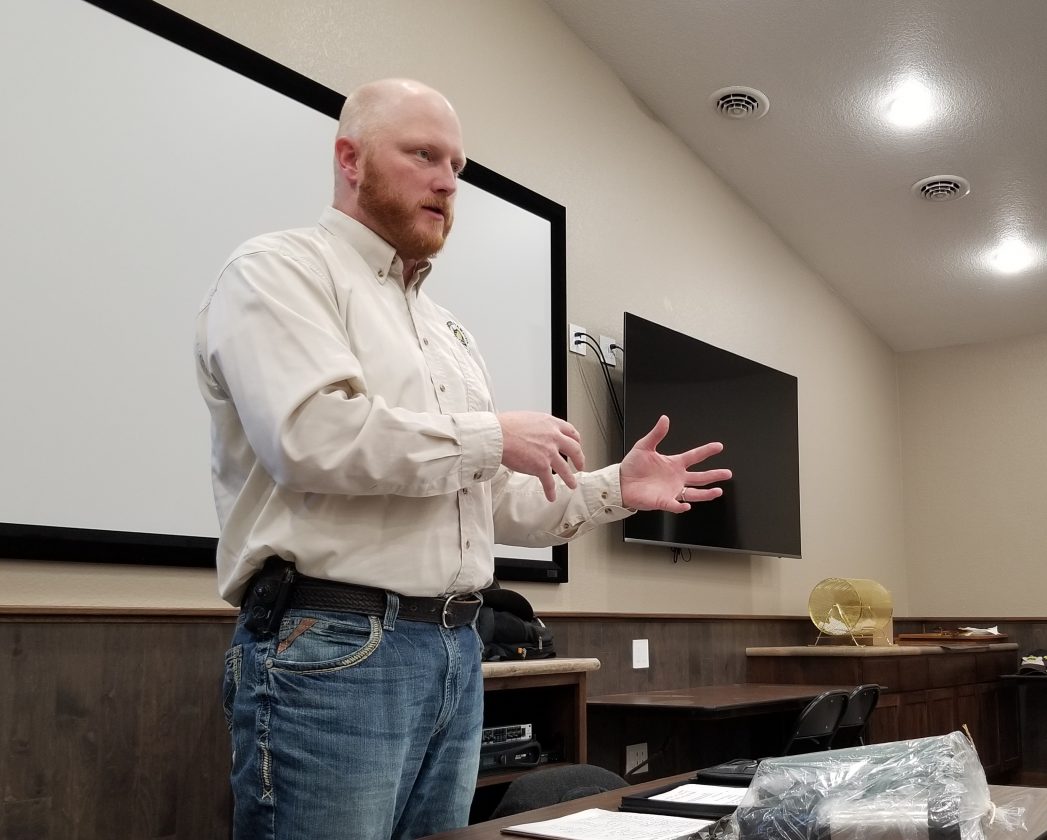 The continuing emergence of Chronic Wasting Disease and proposed new requirements for fish cleaning were among the topics discussed in Velva this past Tuesday. The North Dakota Game and Fish Department conducted a District 2 Advisory Board meeting hosted by the Velva Sportsmen. A large number of sportsmen and landowners were present.

In his opening remarks Peterson addressed the problems associated with very wet conditions during this year’s hunting seasons, primarily due to heavy September rains and a record-breaking October snowstorm. One of the biggest issues was travel on soggy roads and trails which often created rutted conditions.

“We know it’s a problem with no real solution,” said Peterson. “We will keep advising people to use common sense.”

When asked by an attendee if in future seasons bowhunters could be allowed to use lighted sights and range-finder sights, Peterson responded, “Never say never. We talk about it every year.”

Peterson was referring to follow-up meetings held at the Game and Fish Department at the conclusion of the fall Advisory Board meetings which are held at eight locations throughout the state. It is then that input from sportsmen at each of the meetings is discussed before G&F determines preferred rule changes.

The room became very quiet as sportsmen and landowners paid particular attention to Peterson’s words as he brought up the “no trespass law,” Senate Bill 2315, that was recently debated in the state Legislature. The law would have made all private land in North Dakota considered legally posted without the current requirement that landowners place signs on their property saying the same. SB2315 failed but an alternative bill, House Bill 1021, did not.

HB1021 allowed for the formation of a “land access study group” to determine a way to place all private land in a data base stating whether or not the land was off limits to the public whether it be for hunting, birdwatching, photography or any other activity.

The next meeting of the land access committee will be held in January in Bismarck. They will be analyzing a proposal from three counties – Ramsey, Slope and Richmond – to serve as test counties for electronic posting effective Aug. 1.

It was announced that proposed changes to the state’s fishing proclamation for 2020-2022 would include increasing the daily smallmouth bass limit from three to five.

Also, the State Fair Pond in Minot would be opened to fishing year round with the exception of a 2-3 week period prior to the State Fair. Additionally, fishing at the pond will be catch and release only from April 1-July 31 but anglers will be allowed to keep fish outside of those dates. The proposed change is due to the high frequency of winterkill at the pond. The pond is stocked annually prior to the State Fair when catch-and-release fishing is available free to fair patrons.

Power told the gathering about new rules for cleaning and transporting fish. The proposed new regulation, said Power, was that “any two pieces of fish would be counted as one fish.” The reason for that, he said, was that game wardens were encountering some instances of confusion when checking fishermen with cleaned fish, especially when the fish was cut into several pieces.

An example, said Power, is “Two walleye cheeks is one fish and a northern pike backstrap is one fish.”

Walleye are a fish easily cleaned with one fillet from each side, which would equal one fish. However, if an angler removes the meat from the cheeks, considered by many to be a delicacy, one fish would then be counted as two against the daily limit.

A common method for cleaning northern pike is to remove the backstrap, take fillets from both sides, sometimes the fillets from inside the y-bones as well, and boneless pieces from each side of the tail section. That cleaning method results in seven pieces of fish which, under the proposed cleaning and transport rule, would count as four fish against a five fish limit.

“You’ll need to finish fish off at home,” said Power.

Anderson updated the gathering on the latest developments of chronic wasting disease, or CWD, that has been discovered in some areas of the state. CWD affects the nervous system of deer and spreads prions on the landscape. CWD outbreaks can decimate a deer population. An example, said Anderson, can be found in Wyoming where CWD has led to nearly a 20% decline in white-tail and mule deer each year.

“If CWD becomes more prevalent than it is, then it manages the population for you,” explained Anderson. “We’ve only had one dead deer from CWD, which is very good, and we don’t want anymore.”

As CWD progresses in a deer’s system, which can take 18 to 24 months before showing symptoms, a deer “Loses its ability to function and eat. It is more susceptible to hunting, vehicles and predators,” said Anderson.

Precautions initiated by Game and Fish to help prevent the spread of CWD includes prohibiting the transfer of deer for processing or taxidermy purposes outside of a hunting unit known to have CWD and to initiate a ban on baiting in effected units. Deer on bait come into contact with other deer which facilitates transfer of CWD from one animal to another.

Deer hunting Unit 4B, said Anderson, where CWD was most recently detected, will be added to the system for no baiting in 2020. Results of samples taken from deer this past deer gun season for CWD testing had not been received by Game and Fish as of last Tuesday.

The state’s bighorn sheep population was also discussed. Bighorns in North Dakota are basically divided into what is considered the northern and southern herds in Badlands terrain of western and southwest parts of the state. A pneumonia outbreak has led to a severe decline in numbers in the southern herd. While a strain of pneumonia has also been present in the northern herd, the northern Badlands sheep have shown an ability to recover rather than succumb to it.

“We are considering, potentially, exterpating the southern herd and then re-introducing bighorns,” said Anderson. “The southern herd hunt would take place next fall for rams and ewes, but that’s not a for sure deal right now.”

Replacement sheep for the southern herd, said Anderson, could come from other states or possibly from bighorns transplanted from the state’s northern herd. The latest count on the northern herd places the population at nearly 300 bighorns.