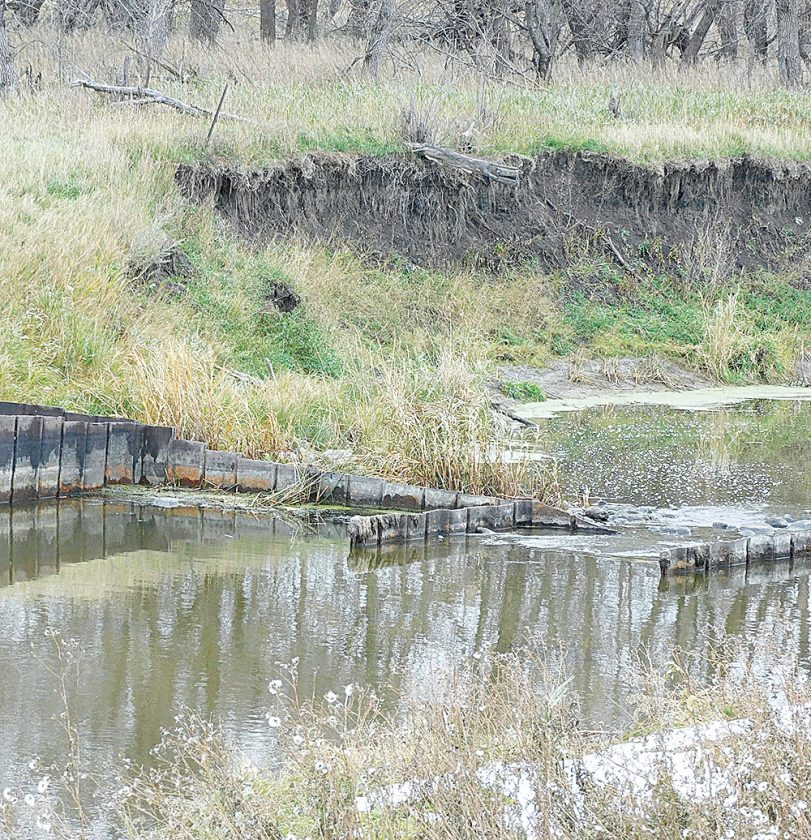 Kim Fundingsland/MDN Water remained still earlier this week at this structure near Baker’s Bridge, meaning limited flow in the Souris River. The flow in recent days is due to rainfall and snowmelt runoff.

It is an unprecedented time for water flows all across North Dakota.

The Red River on the state’s eastern border is setting high-water records for October. Sandbagging is needed to hold back the James River in Jamestown. The Sheyenne River at Valley City is at flood stage. Releases from Garrison Dam were increased this week.

The Red River is at its highest level ever for this time of year. The Red flows north, through the heart of the state’s major cities of Fargo and Grand Forks and on up to Winnipeg. Many tributaries to the Red are running bank full too. Other than the closure of some roads due to the high water though, flooding is very minimal and, reports the National Weather Service in Grand Forks, “no communities are threatened.”

Even with no serious flooding taking place now, the record wet fall season increases the possibility of higher than usual runoff into the Red River next spring. Similar concerns are being shared by residents in the Jamestown and Valley City areas. As has been the case in the Red River Valley, heavy September rainfall and a record-breaking October snowfall have contributed to high water levels usually reserved for springtime.

Jamestown has two reservoirs above the city, Pipestem and Jamestown Reservoir, that empty into the James River that flows through Jamestown. With those reservoirs filling, the U.S. Army Corps of Engineers has increased releases from them.

At Valley City, located below Bald Hill Dam that backs up the Sheyenne River to form Lake Ashtabula, the situation is similar. Neither city is expected to see serious flooding but, nevertheless, have had to engage in some unusual fall flood fighting measures. In Jamestown that has involved sandbagging at a few low points along the James.

While the water woes continue in eastern North Dakota, the western part of the state has thus far avoided serious water troubles. That’s not to say it hasn’t been wet in western North Dakota. Precipitation totals for September and thus far in October are remarkably high and so too is soil moisture content.

On Thursday the Corps announced that the amount of water being released from Garrison Dam, already high for the season, would be increased by 2,000 cubic feet per second from 46,000 cfs to 48,000 cfs. Although the rate is higher than normal for this time of year it is not due to rising water in Lake Sakakawea which has actually been on the decline for several weeks.

“The Oahe pool was tracking a little bit lower than the monthly forecast and Sakakawea a little bit higher,” said Todd Lindquist, Corps of Engineers, Riverdale. “The increased release is being made to balance the system.”

The goal each year for the Corps is to reduce the amount of water in the upper three reservoirs in the Missouri River System to predetermined levels by Feb. 1. Doing so insures that all three reservoirs will have their designated “full flood storage” available prior to the runoff season. The reservoirs are Fort Peck in Montana, Lake Sakakawea in North Dakota and Lake Oahe which originates in South Dakota and backs up into North Dakota.

The National Weather Service in Bismarck issued a Hydrologic Outlook this week concerning the increased releases from Garrison Dam. It stated, “Downstream areas, such as the Bismarck and Mandan area, will see an increase of about 0.3 feet in water levels. Missouri River levels at the Bismarck gauge have been between 11.0 and 11.2 feet as of late and this new discharge suggests river stages may range as high as 11.5 feet well into the first half of November.”

Despite all the record-breaking rainfall, particularly in September, the Souris River that flows through Minot has escaped any troublesome runoff. In fact, there has been virtually no movement in the Souris above Lake Darling and very little at points downstream.

Rain and snowmelt did cause a rise of approximately 1.5 feet in the Des Lacs River at Foxholm earlier this week but levels have since been falling. A similar increase and decline was noted at the Boy Scout Bridge west of the city.

No water is being released into the Souris from Lake Darling Dam and the reservoir is not on the rise. The flow at the Sherwood gauge, where the Souris enters the United States from Saskatchewan and then continues into the north end of Lake Darling, was barely over 30 cfs Friday. The International Agreement, which governs water in the Souris River, requires that Lake Darling be drawn down to 1,596 feet by Feb. 1. Lake Darling was at 1,596.87 Friday.