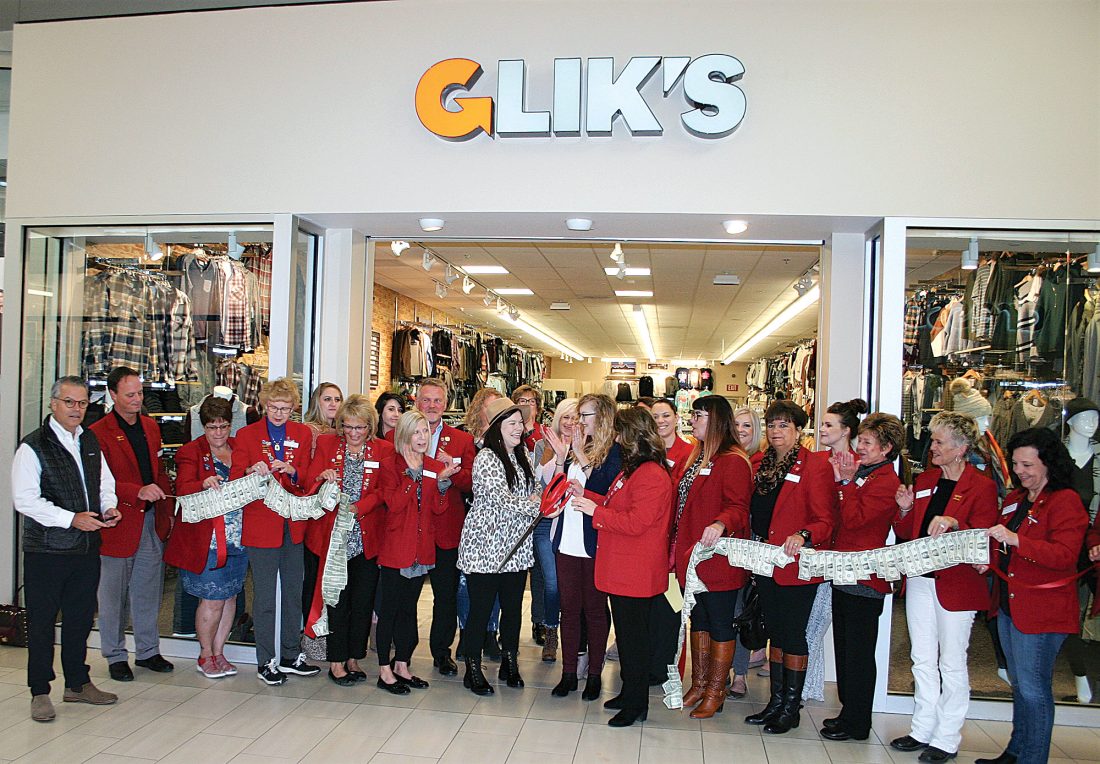 Submitted Photo Representatives of Glik’s and the Minot Area Chamber of Commerce cut the ribbon earlier this month on the new store in Dakota Square Mall. On the ribbon are 122 dollar bills, representing each year the company has been in business.

Glik’s, a family-owned retail company with a long history, established its 70th location with the opening of a store in Dakota Square Mall in Minot Oct. 17.

Glik’s offers men’s and women’s fashions. Initial response in the Minot area to the company’s offerings has met every bit of expectation, said vice president Jim Glik from the company’s headquarters in Granite City, Illinois.

“We are very happy with Minot. They are liking us,” he said.

Glik’s opened a women’s boutique in Bismarck’s Kirkwood Mall in August, and the mall owner encouraged the company to consider its other mall in Minot as well. Having two stores in western North Dakota presents opportunities to help each other with personnel needs, Glik said.

“Both malls are very attractive. We kind of felt there’s still a mall life when it comes to communities like Bismarck and Minot,” he said. “There are malls out there that are very relevant, particularly in very cold environments.”

The space available at Dakota Square allowed for Glik’s to carry both men’s and women’s merchandise.

“We are about fashion – young to middle age, male and female,” Glik said. “We are always bringing fresh product every week into every store.”

Glik’s involves its store managers in determining the trends and hot items that guide merchandising for each store. Many of the company’s buyers have been promoted from its boutiques, and that local experience and personal insight enables Glik’s to select brands and styles specific to a community, according to the company. It means no two Glik’s stores are exactly the same.

As large as the company has grown, it still operates each location as a small, family-run store, Glik said.

Four generations of the Glik family have been involved in building the company since its founding in 1897, according to the company’s written history. The first location in St. Louis, Missouri, began as a menswear store. The second location in Madison, Illinois, expanded into a full department store. Now 122 years later, as one of the nation’s oldest retailers, Glik’s continues to open new stores.