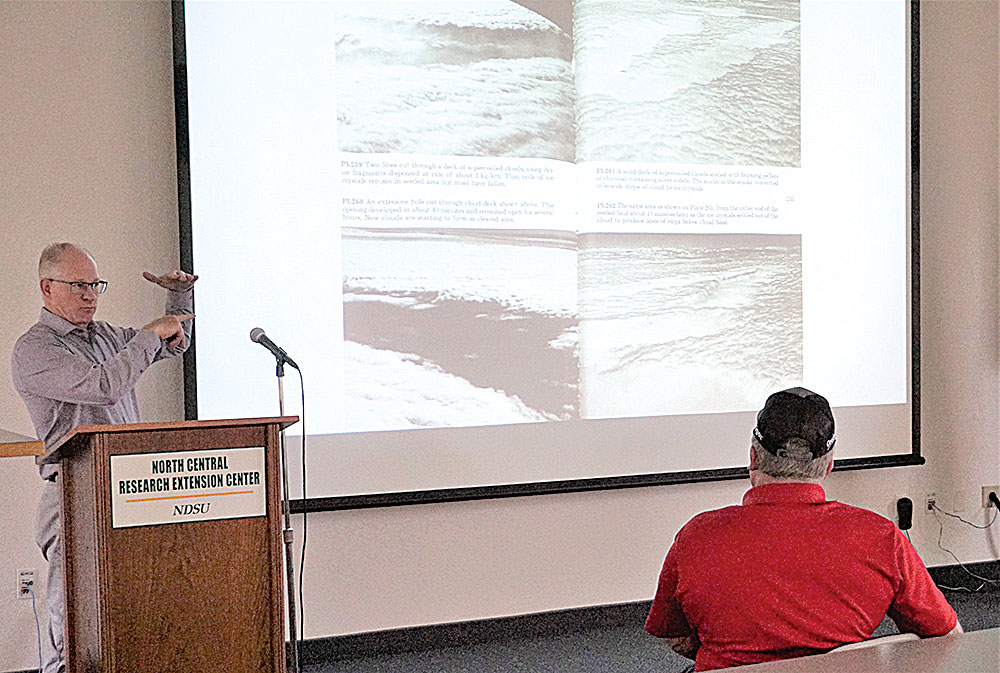 Jill Schramm/MDN Darin Langerud, left, explains the science behind weather modification in speaking to an audience at the Elmer Jesme Conference of Counties at the NDSU Extension Center, Minot, Monday.

The weather modification program in western North Dakota is generating a return on the investment, the director of the state Atmospheric Resource Board told officials at an Elmer Jesme Conference of Counties meeting in Minot Monday.

“The program in North Dakota has been going on for a long time, and I think, based on the evidence, pretty successfully over time. The benefits to agriculture far outweigh the costs,” Darin Langerud said.

The cost of the program in North Dakota this year is estimated at 40 cents a planted acre, he said. Meanwhile, studies within and outside of North Dakota find a 5% to 10% rainfall increase from weather modification.

Langerud reported North Dakota State University recently completed a study on the economics of cloud seeding that found 5% precipitation enhancement provides an extra $21.12 million in crop benefits, or just over $9 per planted acre. At 10% increased rainfall, benefits are estimated at nearly $42 million, or about $18 per planted acre.

Reduction in hail loss from weather modification is estimated at another $6.9 million a year.

“This only looks at ag benefits. This is not looking at any benefits that can be attributed to reducing hail damage on vehicles, homes, businesses, any other infrastructure,” Langerud said. “What this says is you only have to have a very, very small impact through seeding to have a pretty big impact and have an impact that more than pays for itself in the end.”

Counties can create a 10-year weather modification authority through a vote of the people or petitions signed by 51% of the number of voters in the last presidential election. As an option, the county commission can establish a temporary authority for four years by resolution.

Voters also can petition and vote to discontinue participation in weather modification. Eighty percent of Williams County voters agreed in 2000 to establish a 10-year authority after expiration of a temporary program. Bowman County, which has been in the program since the early 1960s, voted in 2016 with 70% approval to continue. Burke County’s four-year temporary authority ended in 2018, and voters came four votes short of approving continuation.

Two cloud-seeding units exist in North Dakota. The northwest district includes Williams, McKenzie, Mountrail and Ward counties. Planes can seed within the 10-mile buffer around those counties, enabling the seeding impact to take effect when reaching the district boundary. Seeding in this buffer area is not typical, though, Langerud said.

The southwest district includes Bowman and part of Slope counties. There is a radar unit in Stanley and planes stationed in Watford City, Williston, Stanley and Kenmare. Dickinson had a plane this year for the first time.

Asked about the heavy hail in Mountrail County this year, Langerud said there were more storms than the district could handle with four planes. The program had one less plane in the northwest district because of budget cuts that led to the Minot plane being moved to Dickinson.

“We don’t have final expenditures for the program yet. It’s going to come in under this total because we didn’t use all of our flight hours, especially up in the northern district,” Langerud said.

He also mentioned ongoing research that includes a rainfall evaluation and modeling study by the University of North Dakota and an analysis of radar-estimated hail development with the National Center for Atmospheric Research, using the Minot radar facility.

“Results from here and elsewhere show the exact opposite of that. Downward effects in an area where you’re able to increase precipitation are always positive,” he said. “If you are increasing the efficiency of the cloud in the seeded region, that efficiency increase doesn’t stop at an arbitrary county boundary, or buffer zone or target area. That increase actually persists downwind for a while before the seeding effect wears off.”

Langerud noted evaluating and proving the benefits of cloud seeding is difficult because the weather is naturally wildly variable.

“So to try to find a five or 10% increase in something that’s a wildly variable is a difficult scientific task. I would caution you not to look at any single individual event and make any claim, and we don’t, one way or the other, as to whether seeding did anything to improve or to harm that situation. Because scientifically, from a statistical standpoint, you cannot prove that on a given case. Not even on a given season. You need multiple seasons. You need a lot of data to be able to make any scientifically credible arguments,” he said.

However, Langerud added the science of cloud seeding is improving.

Chemicals used in cloud seeding are increasingly efficient. For the June through August season in 2019, only about 300 pounds of chemicals were used for the 10,000 square miles of program area.

“But each gram of that silver iodide is so effective, it can produce 100 trillion ice particles,” he said. “You don’t need a lot to have an effect. We’re not trying to fill the cloud with silver iodide. That’s just overkill. What we are trying to do is start the process a little bit sooner in the right areas at the right time, and then natural processes start to take effect.”

Over the past 20 years, planes also are flying less.

“We’re picking and choosing our cases better. We’ve got better radar data, satellite data. We’ve got better instrumentation for remote sensing to be able to determine when and when not to fly. Our forecasting is way better. So we know what to expect now more than we used to,” Langerud said. “And some of the research and development and the evaluations we’ve done have improved and tightened up the criteria we use for seeding.”

Randolph Dashiell Garbutt, 29, will serve an additional five years for shooting a young man and putting him in a ...