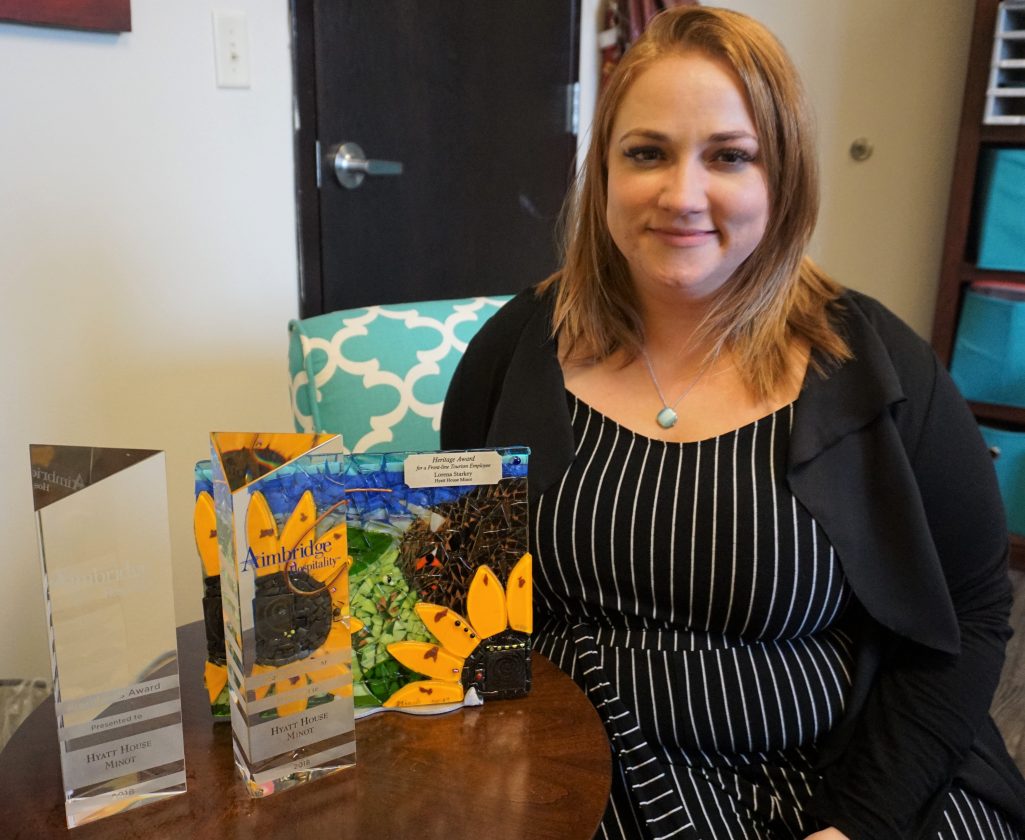 Lorena Starkey found an unexpected love for the hospitality industry when she signed on several years ago as sales director for a new hotel about to open in Minot.

Hyatt House opened in 2013, and shortly afterwards, Starkey was promoted to general manager. Earlier this year she was recognized by the North Dakota Tourism Division with the state’s Heritage Award for excellence in hospitality.

The Minneapolis native, who came to Minot in 2012, had been using her marketing degree in working with various businesses before eventually connecting with Hyatt.

“I was probably searching for what ‘my thing’ was going to be. I never thought it was hotels. If you asked my 21-year-old self, ‘What do you think about working at a hotel?’ there would have never been a moment where I would have been like, ‘Oh yeah, that’s definitely,'” she said. “But it’s my thing. And when you find your lane and you realize that’s something that you can be good at, you can work toward, you can make a difference in, it’s really awesome. So I feel like Minot gave me the opportunity to find it.”

Minot also has been a good community for her family, Starkey added. 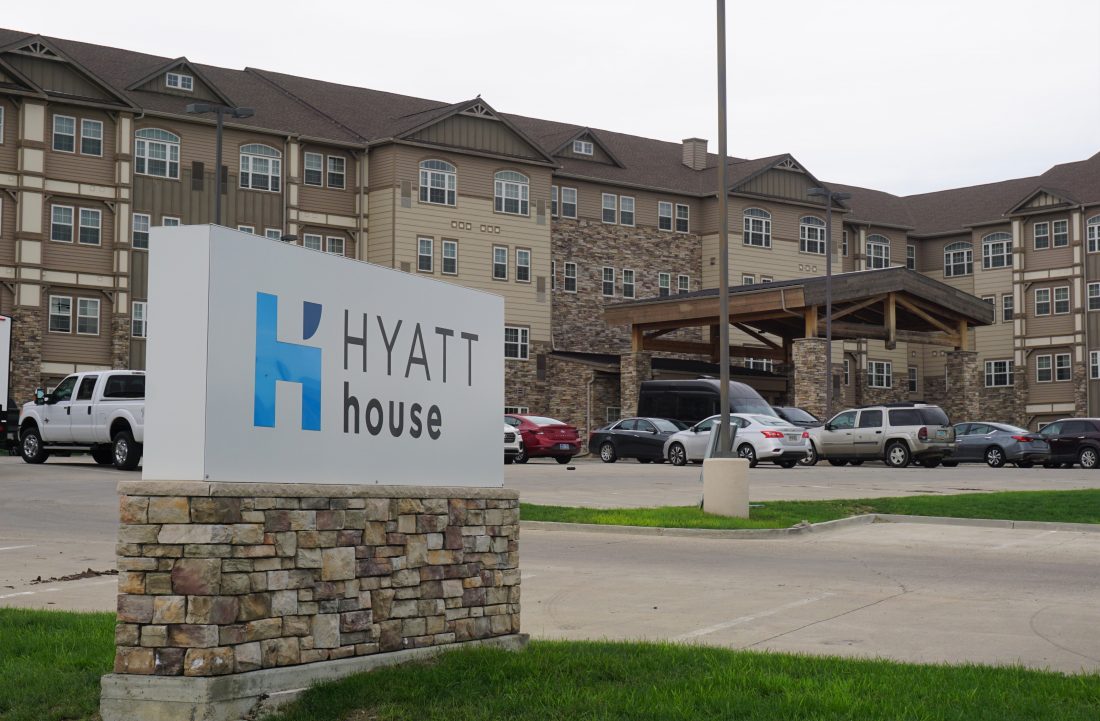 Jill Schramm/MDN Hyatt House of Minot has been recognized in-state and nationally as a top hotel.

“It has the right energy for us,” she said. “I feel like I have been able to thrive personally. My family’s been able to really dig into the community and join things and volunteer and be a part of things and make a difference.”

Starkey serves on the Visit Minot Board and stays busy following the activities of her four children. Over the years, she has been involved with the Minot YWCA and has volunteered and supported the local arts. She started Connect Minot, an organization for business entrepreneurs that ended this year.

Starkey said the award was a huge honor given the other premium hotels in the Aimbridge portfolio.

“That’s really a measure of excellence and operations. It’s about making sure that we are doing well both for the guests as well as our owners,” she said. “We won the President’s Award through Aimbridge Hospitality as well, and that’s definitely a measure of overall growth for us. So it was a good year for us from the national side of things.”

Hyatt House caters both to leisure and business travelers, with long-term stay accommodations that include full kitchens. The hotel also has a chef who provides a full breakfast, and the bar offers a limited menu in the evenings. The hotel recently partnered with the Burlington event venue, The Barn at 52 Pines, to extend lodging services to its wedding clients.

Starkey said the hotel works closely with Visit Minot to let its guests know about the experiences available.

“We are always looking for ways to make sure that we’re directing people to places in the community where they’re going to have excellent experiences,” Starkey said. “And the Minot community is really good about delivering an experience.”

Hyatt’s concierge service is an avenue to connect with guests and answer questions about Minot.

“We get to be ambassadors for our community. It’s really a joy to be able to share the really neat places that you should go and check out while you are here,” Starkey said. “It gives us just one more level of guest satisfaction, one more level to communicate with our guests and make them feel cared for and let them know that you might be in Minot, North Dakota, but we can deliver big city experience. We can deliver customer service that’s unparalleled.”

To meet that goal requires extensive staff training, led at the Minot Hyatt by Starkey, her assistant manager and department managers. Starkey has experience in most aspects of the hotel business.

“I’m a pretty hands-on manager myself,” she said. “I don’t have to have my hand in all things, but I’m there to support my team.”

The state honor bestowed on Starkey this year recognized her work in frontline tourism and in ensuring guests enjoy their time in Minot.

Her nomination stated, “Lorena Starkey has led the Hyatt House Minot team for 6 years, during which she has built a reputation as a cheerleader for Minot. Starkey developed North Dakota’s first mobile concierge service, ensuring guests have easy access to staff 24/7. Her guests love to hear from the general manager and know that their stay in Minot will come with curated lists of places to visit and experience.

“Starkey’s hospitality extends beyond guests at Hyatt House Minot. She has a heart for her staff and wants to truly grow leaders who love to be ambassadors for North Dakota and Minot,” the nomination added. “Starkey can be found working the front desk, flipping omelets, inspecting or cleaning rooms and connecting with her team daily.”

Starkey says she’s just grateful someone took a chance on her in 2012.

“What worked for me was I was just eager to learn, eager to grow and willing to say, ‘I’ll try that,'” she added. “So people gave me a chance, and I just work really hard to make sure that I don’t let them down.”

Travel and Tourism in North Dakota:

– Tourism is North Dakota’s third-largest industry. Travel and tourism supports 13% of the economy.

– 22 million people visited North Dakota in 2015, generating $3.1 billion in spending. The majority of expenditures, 68%, were by visitors from other U.S. states. International travelers made up 9% of the total, and in-state residents traveling to other parts of North Dakota accounted for 23% of spending.

Submitted Photo CHS SunPrairie presents a symbolic check for $10,000 to Kenmare Public Schools toward construction of a new greenhouse for students.

David Shank, of Mount Crawford, Va., flies a Revolutionary War era flag from the Mount Crawford overpass along I-81 Wednesday afternoon. “It’s addicting,” he said. “People honk, wave, put one, two fingers up, take pictures and so on. I’ve never done anything else that makes so many people so happy in such a short time.” Shank said that although he was out Wednesday in remembrance of 9/11, he’s out on the bridge throughout the rest of the year as well. (Daniel Lin/Daily News-Record via AP)

Jill Schramm/MDN Hyatt House of Minot has been recognized in-state and nationally as a top hotel.