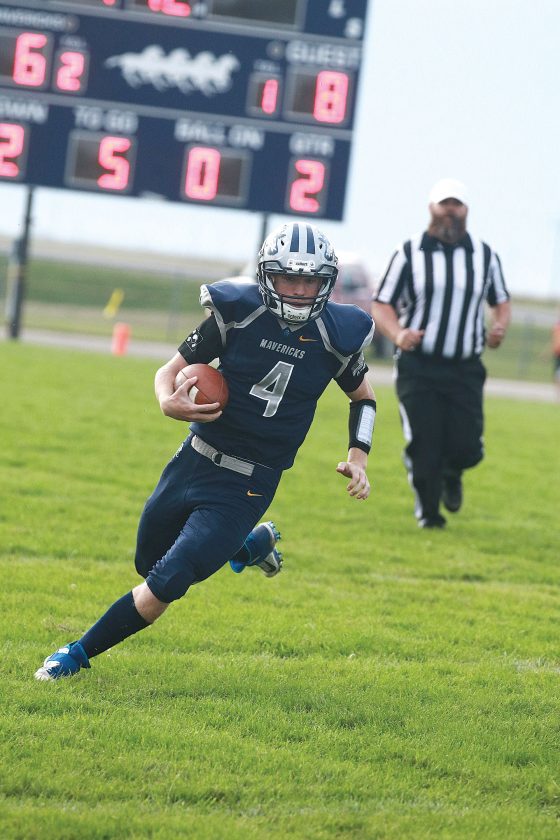 An annual survey recently released by the National Federation of State High School Associations contains some attention-getting statistics. Foremost is a decline in the number of participants in high school sports for 2018-19, down more than 43,000 athletes from the previous year.

While it must be noted that the decrease compares to record-high participation in the 2017-18 school year, there are some notable numbers. The largest drop was in football, which lost more than 30,000 players. It marks the fifth straight year that football participation at the high school level has dropped nationally.

A high-contact sport, football has been under increased scrutiny for the past few years. The biggest concern is the possibility of injury, mostly concussions. The issue has even been highlighted by the National Football League as a primary concern.

“It’s hard to field as large of numbers as we used to,” said Brooks Stafslien, Stanley High School athletic director. “There’s more worry about concussions. Parents are not willing to put their kids at risk anymore.”

The Stanley Blue Jays, with a rich tradition of fielding top-notch football teams, had only 16 students out for football last year and dropped varsity play in favor of a junior varsity schedule. This season Stanley has a few more players out for football but, once again, is playing only a JV schedule.

“Our enrollment has been going up but, unfortunately, our football numbers have been declining,” said Stafslien.

Stanley’s enrollment in grades 7-12 is about 375 students. Part of the numbers game for football though, said Stafslien, is a low participation rate among juniors and seniors. However, he adds that he is “kind of being optimistic” that enough freshmen and sophomores currently out for football will return for next season to allow the Blue Jays to return to a varsity schedule once again.

At Garrison High School the situation is not much different. A year ago the Troopers dropped varsity football due to a lack of participants. Taking a year off from varsity competition resulted in higher numbers of students playing football this year. Garrison is playing varsity football once again.

“Last year we had only three juniors and four seniors out for football,” said Jason Ermer, Garrison High School athletic director. “What we’ve seen this year is that our numbers have actually increased now that we are back to a varsity schedule but we’re still short from what we thought we’d be.”

Ermer said early expectations were that more than 30 students would play football for Garrison this season but at their last game the Troopers dressed 22 players. Garrison has 284 students enrolled in grades 7-12, 116 of which are in the upper four grades.

Minot’s Bishop Ryan High School has a strong tradition in football, but the Lions have not escaped a decline in the number of athletes participating in the sport.

“I think football is hurting the most of any sports. Parents don’t approve with concussions and things like that. That’s kind of nationwide,” said Roger Coleman, Bishop Ryan athletic director. “We have about 25 kids out for football, lower than I would expect.”

At Drake-Anamoose High School, with fewer than 50 students in grades 9-12, even playing 9-man football has gone by the wayside. Last year the Raiders started their 9-man schedule with just 13 players. Not wanting to drop the sport entirely, this year they are playing 6-man football. The 6-man game is new to North Dakota.

“Our numbers are up since going to 6-man,” said Steven Heim, Drake-Anamoose athletic director. “Right now we have 16 on our roster. It’s a wide open game and an enjoyable game.”

“We’ll have a mini-playoff at the end of the year,” said Heim. “We’ll play a third place and championship game in Watford City.”

Some schools playing 11-man football, Velva and Bishop Ryan among them, could move into the 9-man ranks. Lewis and Clark Berthold, already playing 9-man football, was down to just nine players for a recent game.

Larger schools in the state are not as affected as small schools by declining student participation in football where the loss of even a few players can make a dramatic difference to a program. Matthew Fetsch, NDHSAA executive director, says the trend over the last 10 years has been that small schools are getting smaller and large schools are getting bigger. In recent years the building of new schools such as Bismarck Legacy, West Fargo Sheyenne and Fargo Davies has contributed to an increase in the total number of high school athletes.

“In football in 2010 we had 4,075 participants in the state. Last fall it was 4,078,” said Fetsch. “More schools means a lot more opportunities for students who weren’t there not that long ago.”

At Minot High School, with approximately 2,000 students in grades 9-12, there’s plenty of participation in football. In fact, the Magicians boast the only program in the state fielding five football teams – a varsity squad and four more.

“Our numbers are strong with 138 football players,” said Mitch Lunde, Minot Public Schools athletic director. “We have good numbers throughout all of our programs, for the most part. If we had two high schools we’d have even more football players, more everything.”

At the national level boy’s and girl’s basketball, wrestling, golf and girl’s fast-pitch softball have all declined in the number of participants. North Dakota, particularly at smaller schools where high school sports teams often capture the spotlight, has not been immune to the national trend.

“It is kind of sad. There’s a lot of kids in school who don’t participate,” added Wayne Brackenbury, Mohall-Lansford-Sherwood athletic director. “Kids have more things to do these days. Being a state champion isn’t a priority anymore.”

Brackenbury said class size and the number of boys and girls, especially at small schools, can have an affect on the number of students participating in a sport. There’s other factors too, such as the trend of athletes focusing on a single sport. Multi-sport athletes are becoming a thing of the past.

Perhaps one of the most surprising items from the national survey is the drop in participation in girl’s basketball, reaching its lowest nationwide total since the 1992-93 school year.

Participation in basketball is a battle at Drake-Anamoose too where enrollment is down about 20 students from three years ago. Boys and girls basketball are winter sports.

“We anticipate our basketball numbers will be down for both boys and girls,” said Heim.

“Girls basketball is a struggle throughout North Dakota and the nation,” remarked Lunde. “There’s more travel and an AAU type of sport. Kids think if they’re not playing those kinds of schedules they’re behind the game.”

Some sports, though, at least at some area schools, have seen increased participation. Volleyball numbers have remained steady at Drake-Anamoose. Stanley is experiencing an increase in volleyball interest and the number of cross country running participants reached 22, believed to be the most students ever taking part in that sport at Stanley High School. There’s also renewed enthusiasm for cross country at Garrison and Max.

In general, students tend to show up for sports teams in good numbers at the junior high or middle school level, but then participation begins to taper off as they reach higher grades. The reasons why can be many, from feeling an inability to compete to interests outside athletic arenas.

“There’s other hobbies out there. Some are more into the video game atmosphere or social media takes up their time,” said Coleman.

E-sports, competitive electronic gaming, is poised to be introduced at the high school level. Several schools, mostly in the eastern part of the state, have already petitioned the NDHSAA to sanction e-sports teams. About a dozen schools in the state have already fielded e-sports programs.

“Anything to compete, work with others, to train, any of those activities are good,” stated Lunde when asked about e-sports. “I really haven’t had anybody ask about it, but it’s coming. In the next five years? More than likely it’s coming.”

High School trapshooting has easily shown the biggest surge in the numbers of participants. The sport is not sanctioned by the NDHSAA but rather is a club sport. Still, interest among students has been very high with more and more schools joining up each season.

“Those numbers have jumped and jumped rather quickly,” said Ermer. “We had 11 kids when we started and now we’re up to 26-27.”

“Those numbers have increased for us too,” said Stafslien.

Minot High School is among the recent entrants into the trapshooting arena.

“We support it,” remarked Lunde. “It’s an opportunity for our kids to be involved and represent Minot Public Schools in a positive way.”