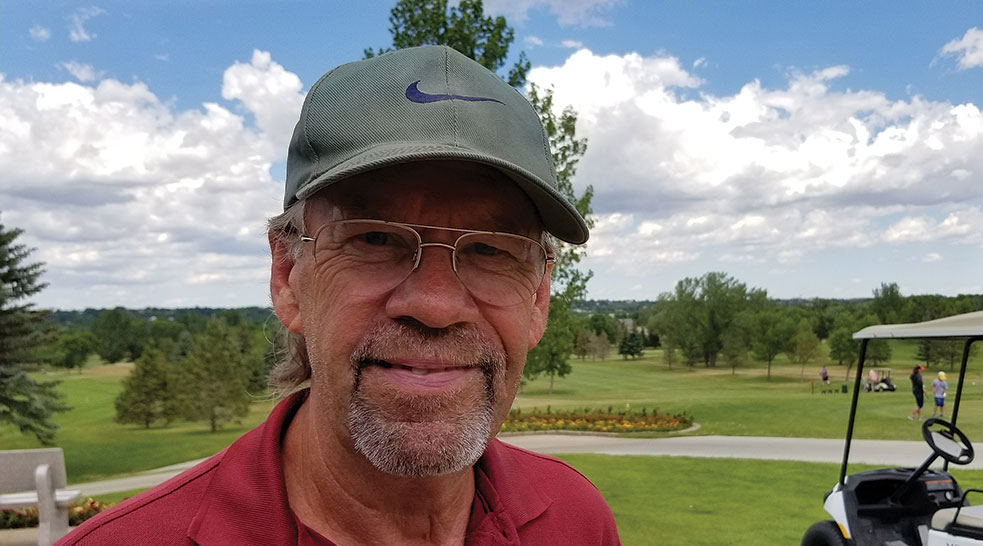 Kim Fundingsland/MDN Mike Stenvold, Minot, has been chosen as a course marshal for the upcoming Professional Golf Association 3M Open in Minnesota.

Finally. After seven years of trying, a Minot man will be inside the ropes of a Professional Golf Association tour event, rubbing shoulders with some of the greatest players in the game. He won’t be playing but maybe the next best thing.

Mike Stenvold has been selected to serve as a hole marshal for the PGA 3M Open which will be played at Blaine, Minnesota July 3-7.

“I am just pumped. I’m so excited about this,” Stenvold told the Minot Daily News. “I get to go down there and work. I get to see all the rounds of the guys who are in it to win it at that point.”

The nationally televised event has already received commitments from top professionals – Phil Mickelson, Jason Day, Brooks Koepka and Bryson DeChambeau among them. It will be the first of a seven year run for the event. Stenvold has been assigned to the 16th hole. For him it is a dream come true, especially working the final round when the leaders will be looking at a big payday.

“I’ll get to see that final group go through 16 and then I can follow them all the way through 18. I’ll be inside the ropes for that,” said Stenvold.

Course marshals can be called upon for a variety of duties but are generally responsible for crowd control, and there will be thousands of spectators squeezing in to see the championship play. Stenvold has plenty of experience on the golf course, something he says might have been a benefit when filling out an application to volunteer for the 3M Open.

“I’ve worked the Pro-Am at the Minot Country Club and ran a few golf tournaments,” said Stenvold. “I think that helped me get into this one. Really though, I don’t know how I got it.”

Stenvold will be working four shifts at the tourney, beginning with Pro-Am play the day before golfers tee off for the tour event.

“That’s perfect. Perfect,” said Stenvold about the chance to watch professional golfers and celebrities from the position of a course marshal. “Then I work Friday noon to 5 and 1 to 5 Saturday and Sunday.”

Stenvold had three choices to choose from when filling out his volunteer request. They were being a standard bearer and carrying the scores for a single group of players, using a laser to measure driving distance for statistical purposes or being a marshal assigned to a single hole on the course.

“I wanted to be on the golf course,” remarked Stenvold in expressing his pleasure at being chosen as a marshal. “When I watch golf on TV I watch the marshals. That’s what I do. I pick them out.”

Marshals are expected to practice certain rules of golf etiquette, such as not talking to the golfers unless they are asked a question by one of the players. Still, says Stenvold, being in such close proximity to some of the best players on the tour today will be a unique experience, even when they are warming up for play.

“I’ve got access to the driving range,” said Stenvold. “I get a pass for the whole week to be on the grounds, a parking pass, and shirt, jacket and cap that I must wear at all times. This is like going on vacation for me. I just love it!”

Stenvold recalls an earlier futile attempt at volunteering for a major golf event. When the Ryder Cup was held in Minnesota a few years ago they sent out a request for 10,000 volunteers.

“I clicked on that the first day it opened up,” said Stenvold. “They filled it immediately.”

Now his good fortune has him destined to be in a place he’d always hoped for, inside the ropes at a PGA tournament. He’ll be sharing work responsibilities with other golf enthusiasts from throughout the United States and is also looking forward to mixing with the countless spectators who will crowd the fairways.

“I’ll love visiting with those people, golf fans,” stated Stenvold. “They are down to earth people. I’m pumped.”