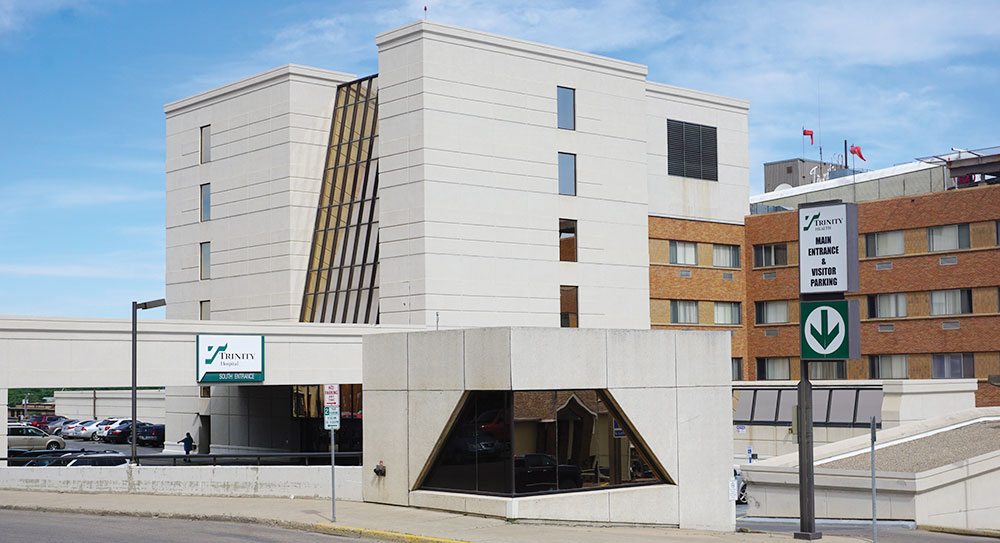 Jill Schramm/MDN Trinity Hospital has been the focus of a Hepatitis C lawsuit that has been settled expect for one case being appealed to the North Dakota Supreme Court.

A plaintiff whose late wife had been infected with Hepatitis C is appealing his lawsuit against Trinity Health to the North Dakota Supreme Court.

Mark Krebsbach, who is represented by the Bakke Grinolds Wiederholt firm in Bismarck, is asking the court to reverse the judgment against him in North Central District Court and order a trial. Court-appointed Master Karen Klein dismissed the case on the grounds the statute of limitations had expired.

Krebsbach is challenging whether the phlebotomist through which he alleges the infection transfer occurred is considered a professional for whom a two-year medical malpractice statute of limitations exists. He challenges whether he knew he had a claim against Trinity as far back as 2014, when the focus of blame for a hepatitis outbreak had been on ManorCare Health Services.

Krebsbach also is appealing the dismissal of his claim for fraud/deceit and unlawful sales and advertising by Trinity, which is based on allegations that Trinity failed to notify patients of problems with its phlebotomist.

The Krebsbach lawsuit is the only remaining legal action regarding a Hepatitis C outbreak uncovered in Minot in 2013. Victims and families filed a lawsuit against ManorCare Health Services in federal court in April 2014. ManorCare also sued Trinity. Victims filed a case in state court against Trinity in February 2015. They dropped their claims against ManorCare in June 2016 to focus on Trinity.

The 21 plaintiffs, other than Krebsbach, filed a motion to dismiss their case Nov. 29, 2016, in North Central District Court after a confidential settlement with Trinity was reached.

ManorCare and Trinity eventually reached a settlement, and the court dismissed the case last February. Public health officials had found at least 52 patients were infected with a genetically similar strain of Hepatitis C, and most spent time at ManorCare’s facility in Minot.

The HCR ManorCare facility in Minot came under new management in 2015 with acquisition by North Shore Health Care. It now operates as Minot Health and Rehab.

Trinity has until July 31 to respond to the court on the Krebsbach appeal. Trinity declined comment at this time.

The Krebsbach court brief reiterates the argument that drug diversion and reuse of needles was at the heart of the hepatitis outbreak. According to the court filing: “Fact discovery and expert analysis generated during litigation provided overwhelming evidence the outbreak was the result of serious misconduct by Trinity. According to expert testimony of a world-renowned infectious diseases medical doctor, Dr. Mark Sulkowski of Johns Hopkins, the outbreak began when diverters of injectable drugs among Trinity’s staff infected one or more Trinity patients; those patients were subsequently discharged to ManorCare and other nursing facilities; at those facilities, Employee A’s unsanitary phlebotomy practices, including needle reuse, spread the virus to the remaining outbreak victims.”

The court document, citing investigative reports, continues: “Trinity has been plagued with drug diversion by its staff for several years prior to and during the outbreak, including a number of doctors and nurses that Trinity caught stealing injectable drugs and other controlled substances from the hospital and Trinity’s other operations.”

A deposition from a hospital official stated Trinity disciplined at least 13 employees for drug diversion and there likely were others not caught.

Krebsbach and his attorneys quote a medical investigator’s report indicating all 52 identified hepatitis cases had blood drawn by a single phlebotomist at Trinity.

“Trinity failed to document, investigate and respond to the litany of complaints it received about Employee A,” according to a deposition cited in the brief. Only one incident in 2013 was documented in the employee’s personnel file.

“Even as Employee A accumulated more infection control violations than any other Trinity employee, Trinity did not meaningfully discipline her or make any attempts to protect members of the public whose blood was drawn by her,” the brief stated. “Nor did Trinity disclose to the authorities that it had received complaints about Employee A reusing needles and leaving unsheathed needles behind.”

In arguing against the statute of limitations for medical malpractice, Krebsbach and his attorneys argue the employee was not a professional, but rather the phlebotomist position is more akin to a trade.

They also argue Krebsbach would have had no knowledge of Trinity’s potential culpability in the outbreak in 2014 because most hospital documents in the ManorCare lawsuit against Trinity were sealed and health department and media were reporting the cause of the outbreak as unresolved. After other victims sued Trinity in February 2015, Krebsbach filed to intervene in the lawsuit in September 2016, which the court determined was beyond the two years in which he should have known he had a claim against Trinity.

Krebsbach also argues Trinity defrauded and deceived plaintiffs through multiple misrepresentations, concealment of information and material omissions in not disclosing problems with Employee A. The brief alleges at least negligence but also strong evidence of willful and intentional conduct causing harm.

Krebsbach is asking the Supreme Court to reverse the lower court’s judgment and allow his claims to proceed to trial. He requests the court take oral arguments because of the procedural complexity of the underlying lawsuits as well as the importance of the issues as legal precedent.