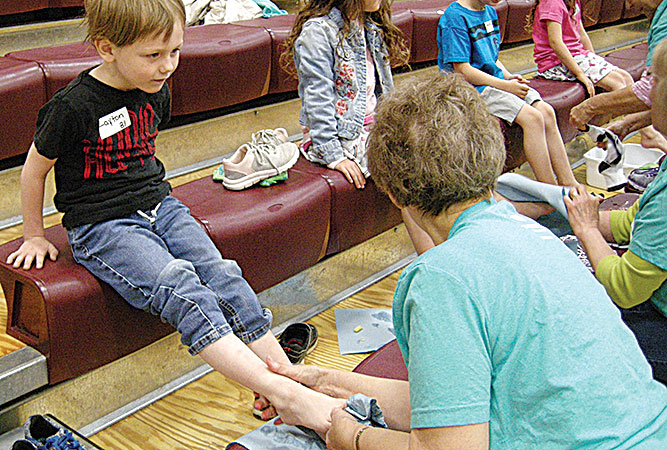 Andrea Johnson/MDN Volunteers washed the feet of children at Washington Elementary and handed out new shoes and socks to each of the 365 kindergarteners through fifth-graders at the school.

Kids grinned and chattered with volunteers who were washing their feet Wednesday morning at Washington Elementary.

All 365 children at the school also got a new pair of shoes and socks Wednesday, thanks to a partnership between Samaritan’s Feet International and Thrivent Member Network – Northland Region.

Kendo Carlson, the school principal, said many of the children at the school come from families in need. However, every single child received the new tennis shoes and socks regardless of their family’s need.

As part of the event, community volunteers, Thrivent network members, Thrivent employees, and Minot State University coaches and athletes also washed and dried each child’s feet and talked with them about what they liked about their brand new shoes.

Denise Blomberg, regional director for Samaritan’s Feet in Sioux Falls, S.D., said this was the first time the event has been held at a location in Minot, but the organization has distributed nearly 10,000 pairs of shoes across the state during nearly 30 events.

More information about the campaign can be found at www.MillionShoes.org)

Blomberg said she hopes there will be other events held at different schools in Minot. Each event requires donations and the help of an army of volunteers.