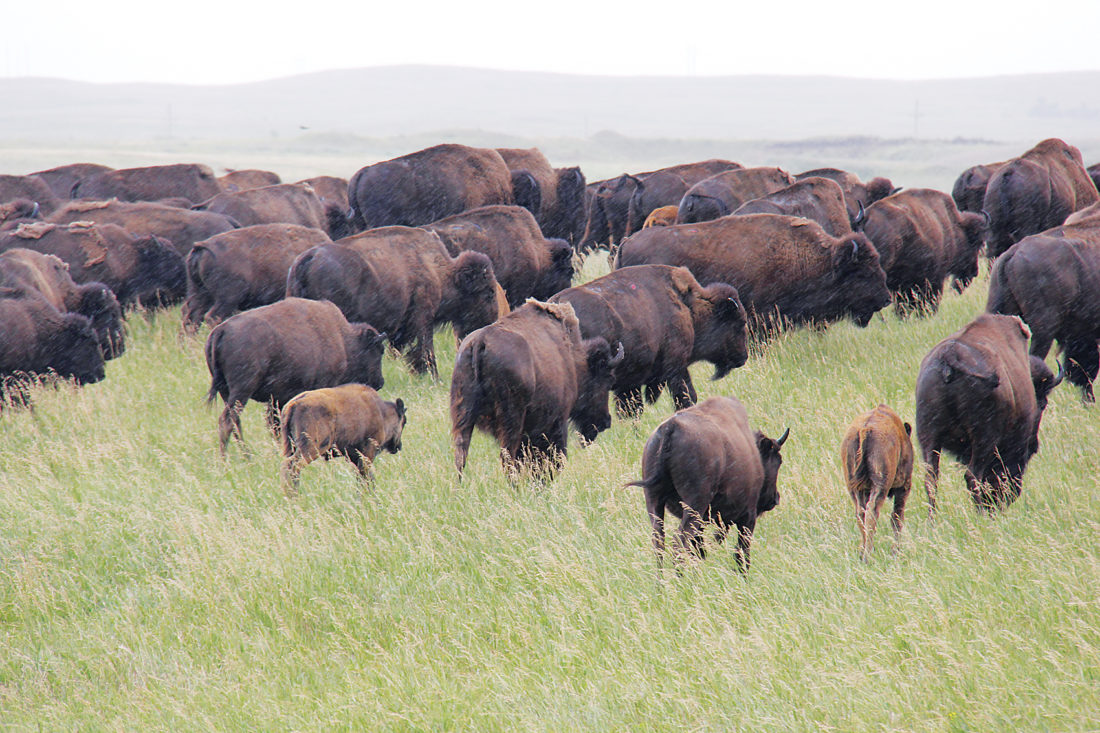 North Dakota’s tribes are targeting a worldwide market with a joint tourism initiative that includes strategically packaged amenities and the types of hands-on activities craved by today’s travelers.

The alliance is still just getting started but already is attracting attention. The group was nominated for the Trailblazer Award at the North Dakota Travel Industry Conference in Bismarck in April,

“As a model, other states are watching us to see how this works out,” said Les Thomas, alliance president and vice chairman of Turtle Mountain Tourism.

The Turtle Mountain Band of Chippewa initiated the alliance conversation about two years ago after hiring George Washington University to develop its tourism plan. The tribe had received a grant from the Northwest Area Foundation for its Pathways to Prosperity Program several years ago. The program identified tourism as an area of economic development, which led to the contract with the Virginia university. From those efforts, an interest developed in a broader, statewide approach to tourism that highlights the state’s native attractions. 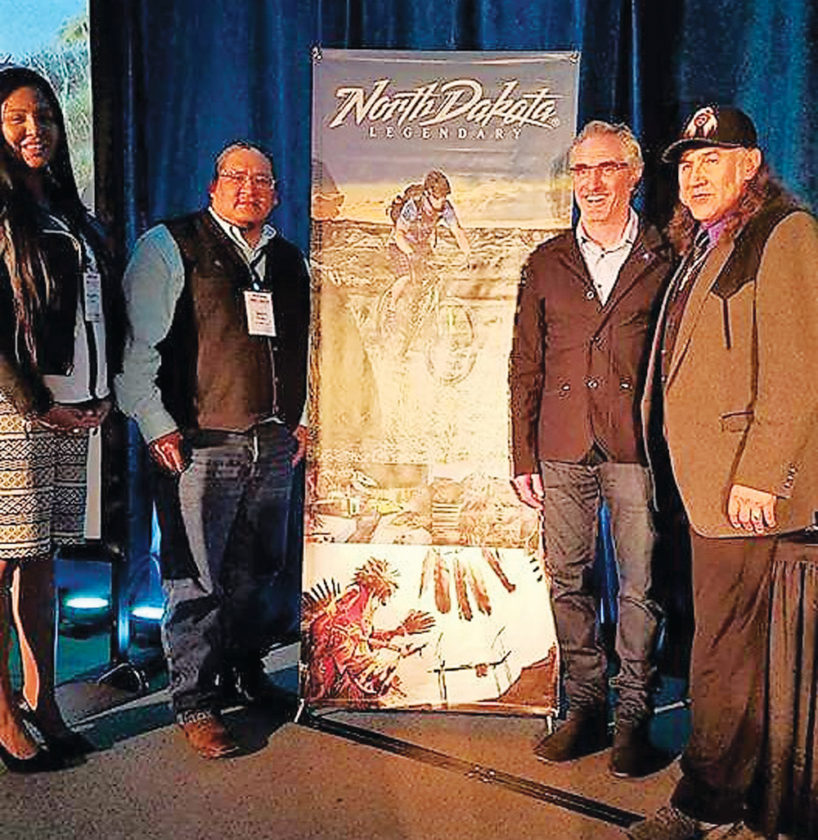 Submitted Photo Natasha Gourd of Spirit Lake and Jason Morsette of MHA Tourism, at left, and Les Thomas with Turtle Mountain Tourism Association, far right, are shown with Gov. Doug Burgum at the travel industry conference in Bismarck April 17 to 19. Burgum has declared May 7-13 as North Dakota Travel and Tourism Week.

“What we want to do is package what we have to offer in Indian Country and develop amenities that the tourists want to see and experience,” Thomas said. “We want to celebrate and advance native culture with unique hands-on experiences and guided tours.”

The alliance is targeting the world traveler with the help of a variety of development partnerships.

“The partnerships between the North Dakota Tourism Department, the tribes of North Dakota, Nativeway Tours and the North Dakota Indian Business Alliance and others are a starting point to accomplish our plan. It’s all about planning, communication, developing partnerships, transparency and executing the plan for a positive outcome,” Thomas said.

The alliance welcomes contacts from any groups interested in sponsoring or collaborating with it. The alliance is registered as a nonprofit entity and operates separately from the individual tribes. It is governed by a board with representatives from the five reservations and the Trenton Indian Service Area.

Thomas said collaboration is good not just for the tribes but for the economy of urban and rural communities that could benefit from additional tourists traveling the state. 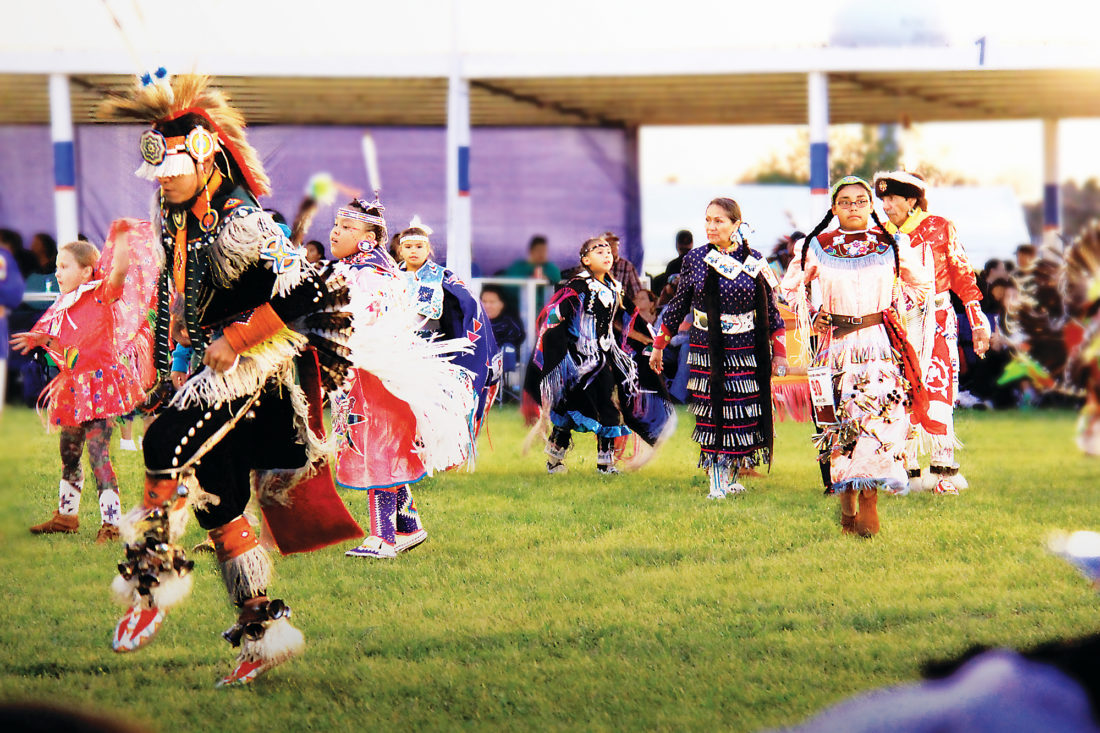 “The biggest focus of our tourism department is to create economic development and sustainability for the tribes and for the state of North Dakota,” said NDNTA board member Jason Morsette with MHA Tourism at Fort Berthold Reservation.

MHA Tourism has developed a tour package to present to tour companies visiting North Dakota for the 2017 International Roundup Tourism Tradeshow this past week. The show was hosted by Rocky Mountain International in conjunction with the North Dakota Tourism Division and Bismarck-Mandan Convention and Visitors Bureau. Nearly 200 tourism professionals from around the world arrived to conduct business negotiations that will influence tourism in the four-state region of Montana, Wyoming and the Dakotas. MHA Tourism is hosting a number of the tourism professionals to give them a look at the Earth Lodge Village and the different events that visitors can experience at Fort Berthold.

North Dakota’s tribal tourism groups are individually putting together long-range plans with an eye on assembling package tours that speak to their unique cultures.

“Every reservation has a different story to tell,” Thomas said. “We want to tell the story from our perspective.”

Some of the tour package events could include visits to powwows, buffalo herds, the Lewis & Clark Interpretative Center, On a Slant and Knife River Villages and the State Heritage Center. The Turtle Mountain Reservation has the Keplinfest music event scheduled this year July 7 to 9 and Aug. 4 and 5 and will be opening a new heritage center in July. Other events in the state include the Mandaree Powwow July 14 to 16, Little Shell Powwow and MHA Summer Fest Aug. 11 to 13 and UTTC International Powwow in Bismarck Sept. 8 to 10. 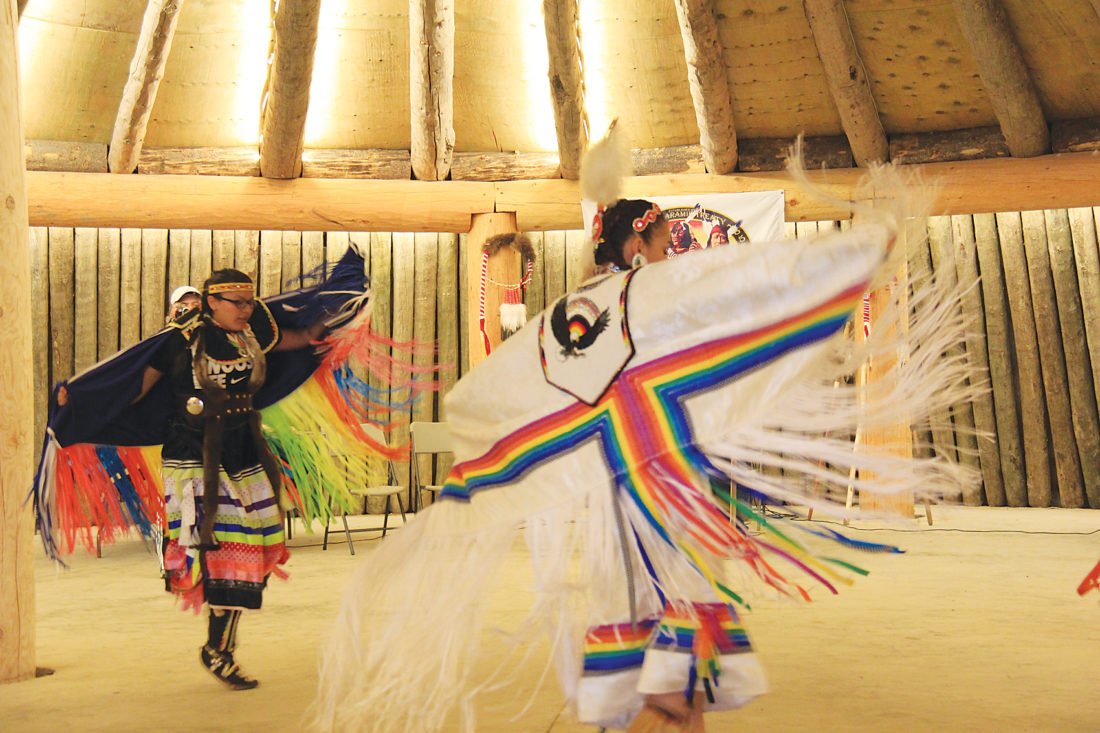 Fred Walker, international tourism manager with the ND Tourism Division, anticipates the alliance driving the creation of a bookable product for communities in Indian Country. He said he looks forward to providing assistance on behalf of the state with leads and information gained at international shows.

“The attention on Native American travel experiences has never been stronger around the world. With the real experiences focusing on culture, history, food and art that are featured across our region, we are in a great place to continue to grow our experiences, workforce and economy,” Walker said. “Native American history and culture is very much in demand for international visitors to our region. Unfortunately, we do not have a great way to measure what we are seeing right now, but from what we are seeing as pent-up demand, we do see this as a need for international travelers.” 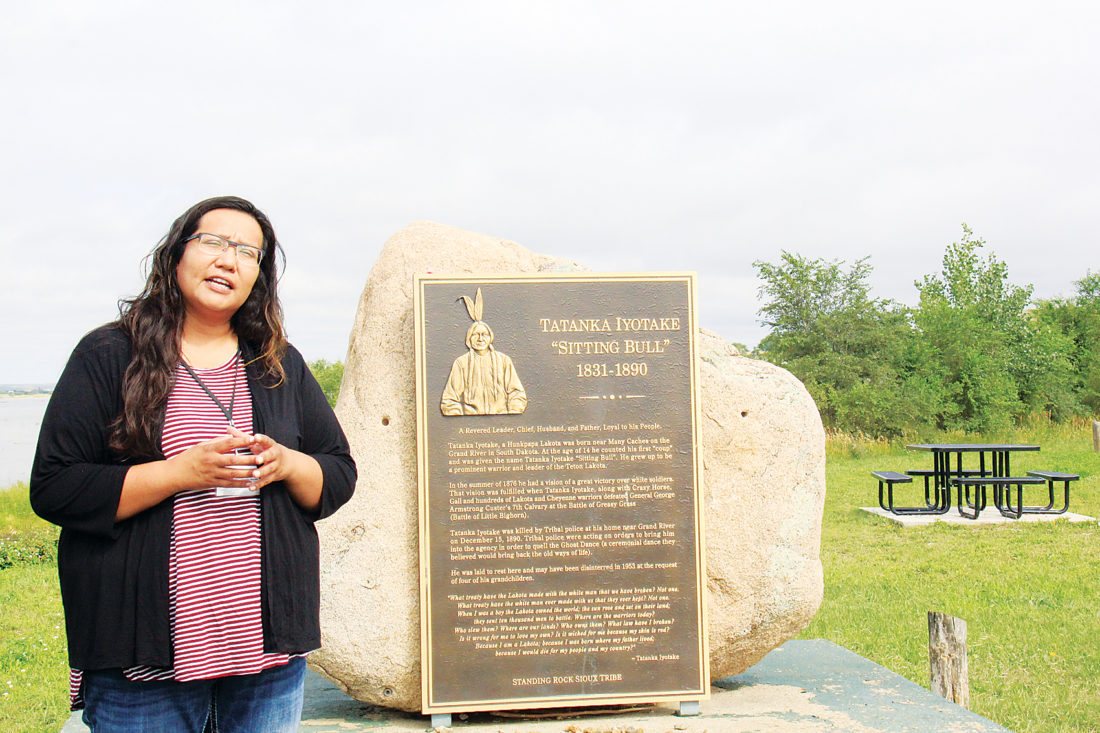 The mission of North Dakota Native Tourism Alliance is to protect, promote, preserve and educate the world about the culture, history and environment of our sovereign nations. The NDNTA will promote and educate through sustainable tourism while developing economic opportunities for our people and nations. 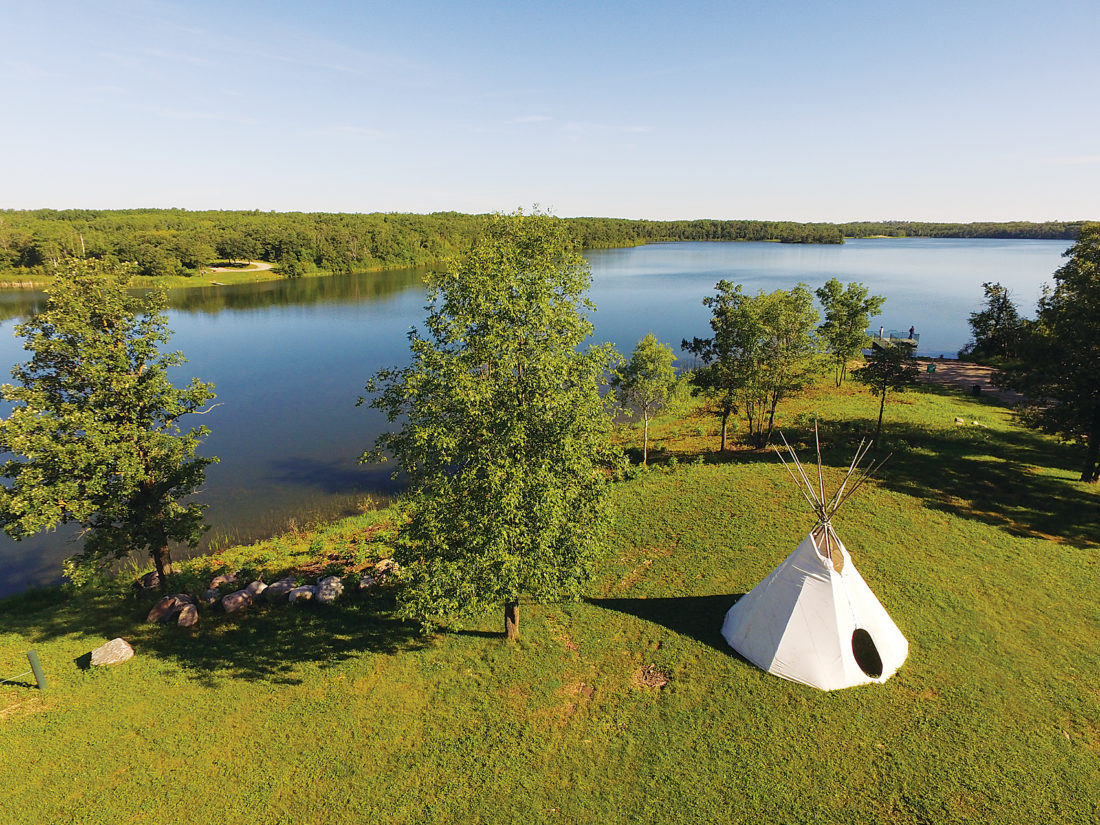 Andrea Johnson/MDN About 75 people attended the Healthy Living Festival on Saturday at the Sleep Inn.

Andrea Johnson/MDN A family of Canada geese, mother, father and goslings, is seen hunting for food Saturday afternoon in Oak Park in Minot.

A B-52 bomber sits outside Gantzer Maintenance Facility at Minot Air Force, April 21, shown in this photo by Airman 1st Class Alyssa M. Akers. Previously Dock 8, the new hangar was renamed in honor of Chief Master Sgt. Fredrick “Fred” Gantzer who served in the Air Force for 31 years, including over a decade at Minot Air Force Base.

Eloise Ogden/MDN The family of Capt. William D. Richardson are shown in this photo taken Aug. 12, 2005, during a rededication of Richardson Hall, a dormitory at Minot Air Force Base named in honor of Richardson. Originally, the hall was named in his honor in 1967. His F-106 plane crashed south of Bismarck in 1963.

Photos by Eloise Ogden/MDN Cory Etchberger, son of the late Chief Master Sgt. Richard Etchberger, is at the right after presenting to Minot Air Force Base airmen at Etchberger Hall, a lithograph by military artist John Witt and signed by Cory and his brothers. The presentation was Feb. 19, 2015, during a ceremony when the dormitory was named for Chief Etchberger, a Medal of Honor recipient.

Submitted Photos Dancers perform at Keplinfest, an event of the Turtle Mountain Chippewa, in this photo from ND Native Tourism Alliance. Unique experiences, such as those shown in these photos, are being offered to give others an chance to celebrate native culture.

Submitted Photo Natasha Gourd of Spirit Lake and Jason Morsette of MHA Tourism, at left, and Les Thomas with Turtle Mountain Tourism Association, far right, are shown with Gov. Doug Burgum at the travel industry conference in Bismarck April 17 to 19. Burgum has declared May 7-13 as North Dakota Travel and Tourism Week. 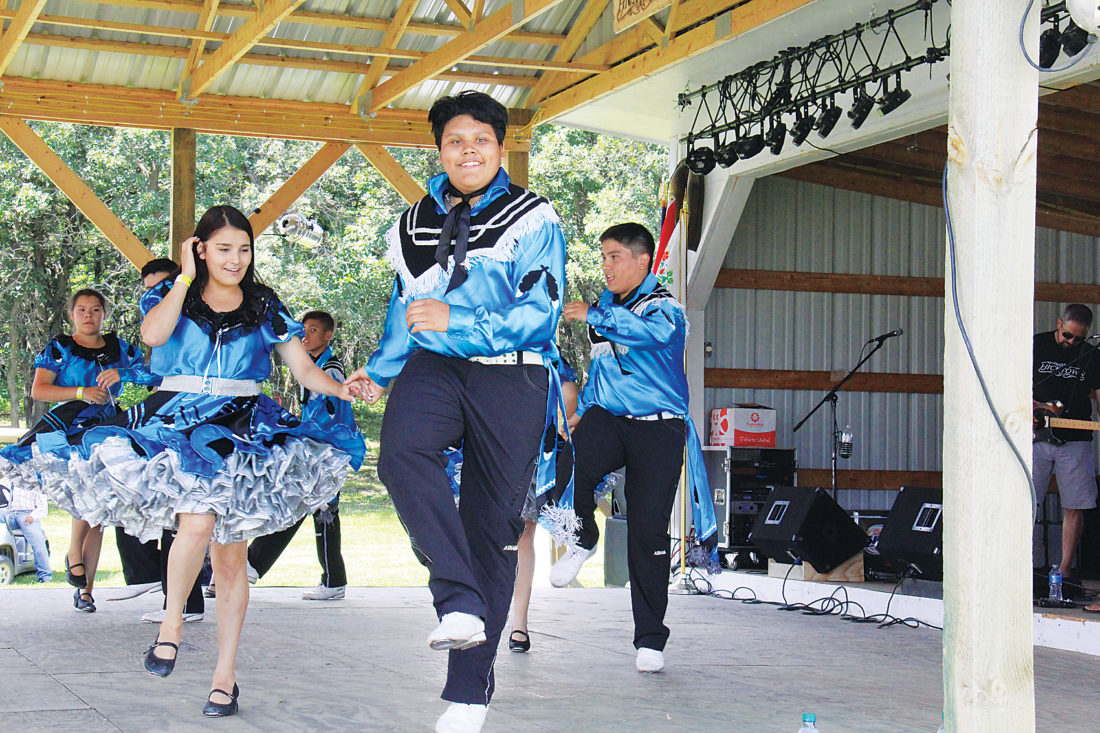 Submitted Photos Dancers perform at Keplinfest, an event of the Turtle Mountain Chippewa, in this photo from ND Native Tourism Alliance. Unique experiences, such as those shown in these photos, are being offered to give others an chance to celebrate native culture.