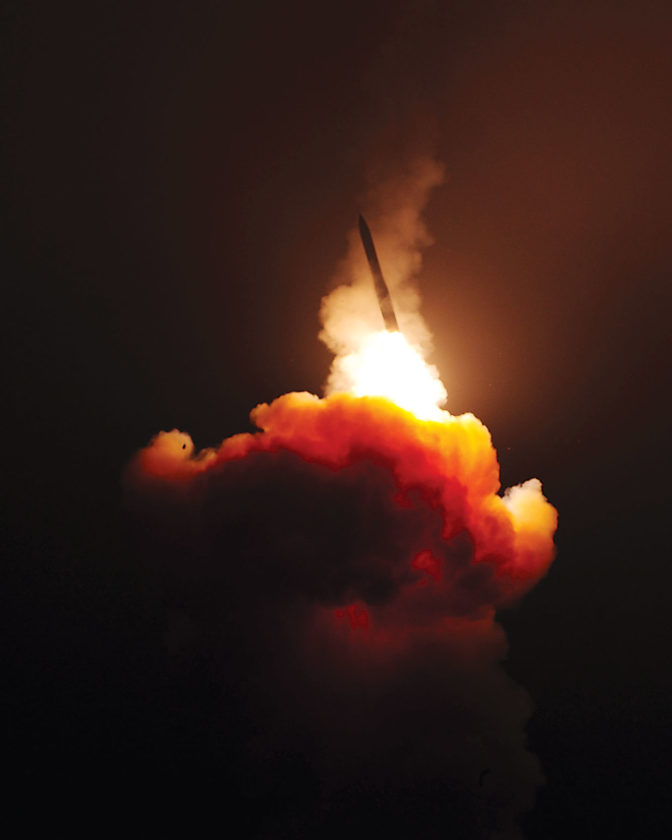 VANDENBERG AIR FORCE BASE, Calif. – A team from the 91st Missile Wing at Minot Air Force Base will test an unarmed Minuteman III intercontinental ballistic missile with a launch from  Vandenberg AFB, Calif., early next week.

Maj. Neil Copenhaver, commander of the GT (which stands for Glory Trip) 221 Task Force, along with Maj. Matt Farrer, deputy, said about 30 personnel have been directly involved with the preparation of the missile that will be launched.

Currently, the launch is scheduled for Tuesday.

“The unarmed MMIII will be launched to the Kwajalein Atoll in the South Pacific approximately 4,200 miles,” Copenhaver said.

The missile range in the Marshall Islands is a remote, secure area established by the U.S. Department of Defense. Its function is to support test and evaluation of Department of Defense missile systems’ programs including the Air Force ICBM development and operational tests, according to information about the area.

The 91st Missile Wing, a unit of Air Force Global Strike Command, is one of three intercontinental ballistic missile wings in the Air Force. The Minot missile wing is responsible for operating, maintaining and securing a fleet of 150 Minuteman III missiles located in underground launch facilities scattered across the northwest part of the state. The missile complex stretches over 8,500 square miles or about 12 percent of North Dakota, according to Air Force information.

In preparing for the upcoming launch, Copenhaver said the munitions team came from the 5th Bomb Wing’s 705th Munitions Squadron. He said that team has already been to Vandenberg and left before the bulk of the team from the 91st Missile Wing arrived.

At Vandenberg, Copenhaver said members of the 91st Missile Wing were welcomed by the professionals of the 576th Flight Test Squadron led by Col. Craig Ramsey.

“The maintainers and operators work with their counterparts for Vandenberg-specific training and to ensure all launch preparation is done in line with their directives,” Copenhaver said.

There are many components of the missile that leave Minot when it is transported to Vandenberg AFB, Copenhaver said.

“The 69,000 pound solid rocket fuel, three-stage downstage is transported by truck through Hill AFB, Utah, and ultimately to Vandenberg. Other components such as the missile guidance set and propulsion system rocket engine are containerized and then shipped to Hill AFB for testing, and then on to Vandenberg,” Copenhaver said. He said the whole shipment process takes about two to three weeks.

Copenhaver said the launches have many purposes, first and foremost is to continue the evaluation of the ICBM force.

“But perhaps larger is promoting the deterrence, assurance and strike capability of the Minuteman III ICBM. These tests demonstrate the credibility of our nuclear deterrent to ourselves and our allies and partners.”

“About once a year or so a missile will be selected from Minot and a team will head to Vandenberg to conduct these Force Development Evaluation launches,” Copenhaver said.