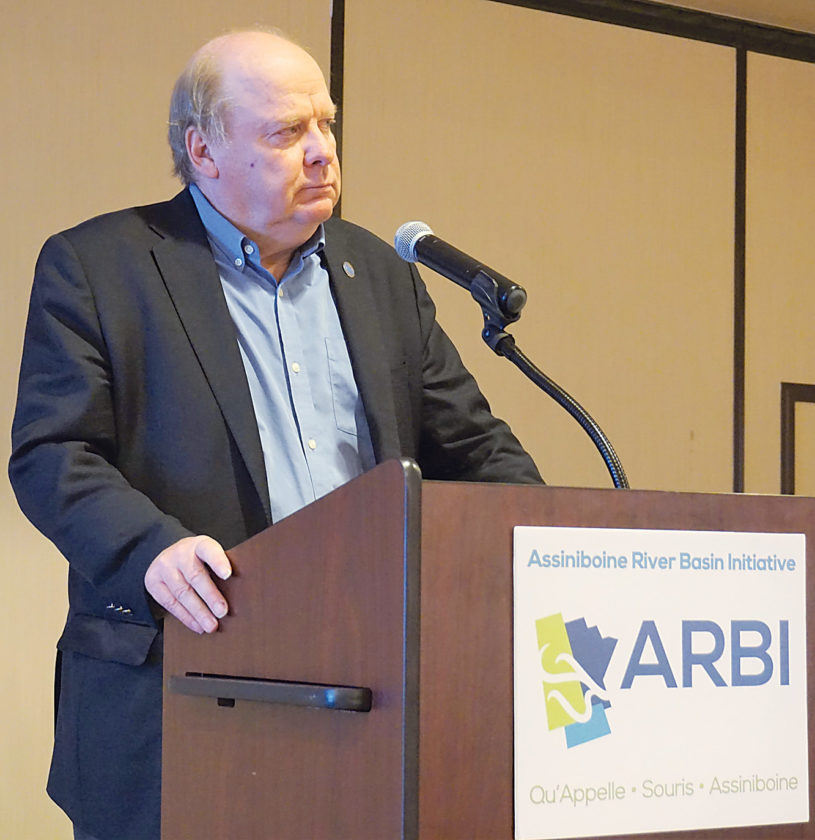 Drought, floods and toxic algae are to be expected in the Assiniboine River Basin if residents don’t work together to mitigate the impacts of climate change, according to a Canadian scientist.

Bob Sandford, EPCOR chairman for Water and Climate Security with the United Nations University Institute for Water, Environment and Health, spoke at the Assiniboine River Basin Initiative’s annual conference in Minot Wednesday. The conference continues today in the Holiday Inn. The Souris River Basin is part of the larger Assiniboine that covers much of western Canada and extends into North Dakota.

Sandford highlighted the link between climate warming and water. Every degree rise in temperature translates to a 7 percent increase in moisture in the atmosphere, and higher atmospheric moisture is proven to be a climate driver, he said.

Sandford talked about “atmospheric rivers,” which scientists only more recently have had the tools to study. These aerial rivers can carry 14 times the water flow of the Mississippi River, he said. As warmer average temperatures increase the moisture in the atmosphere, more damaging floods are occurring, he said.

“I think you know about this because it appears that an atmospheric river was implicated in the genesis of the 2014 flood,” he said, referring to the Saskatchewan and Manitoba disaster rated as a one in 1,200- to 1,400-year event.

He noted some 52 million cubic kilometers of water are being cyclically redistributed around the world through atmospheric rivers at any given moment.

“What we discovered is that 10 trillion metric tons of water are shifted from one hemisphere to another in the form of  increased snow during only one annual seasonal cycle. The volume and weight of water moving continuously around the surface of the earth and between the surface of the earth and atmosphere annually is so great that it actually deforms the shape of the planet.

Redistribution of the weight over the earth’s surface actually changes the shape and the spin rate of the planet, which interestingly affects the behavior of all the planet systems, including both the hydrosphere and atmosphere, and what we are discovering also is the ratio of snow and liquid water in this great seasonal redistribution of precipitation in the northern hemisphere has huge potential consequences for all of us here,” he said.

The loss of Arctic sea ice, which acts as a climate thermostat, is reducing the temperature differences between the pole and the tropic, which affects the behavior of the jet stream, Sandford said. Slower and wavier jet streams bring more erratic weather.

Sandford didn’t attribute the changes solely to carbon dioxide emissions from human activity. Once those activities put the retreat of ice and snow in motion, the process feeds on itself.

“What this means is the Arctic is well on its way to becoming a driver rather than just a responder to climate change,” Sandford said.“We do not need to add carbon dioxide to the atmosphere at all to get global warming, and this is a very unfortunate situation to be in.”

The urgency is becoming apparent, he said.

July 2016 was the hottest month on record and followed a 15-month pattern of record warm temperatures, he said. A United Nations report on steps needed to keep temperature from rising 1.5 degrees Celsius won’t be published until 2018, while average temperatures already have risen from 1.5 to 2 degrees.

“We are already there. So clearly, we need to be ready for change,” Sandford said.

One change is the increase in cyanotoxins and algae blooms growing in lakes and appearing in oceans. Precautions that advise simply avoiding the water may not provide protection, he said. One researcher appears to have discovered the toxins can become airborne, with possible links to diseases such as Parkinson’s, Lou Gehrig and Alzheimer’s.

Despite the gloom, Sandford said opportunities exist with climate warming. Some research has shown improved conditions for raising spring wheat, durum, barley, oats, corn and soybeans. The wildcard is extreme events. Droughts may be more severe than the region has seen in the past, he said.

“Even if water is managed, we can expect cooperation over water to be severely tested in the future,” Sandford said. “We are going to have to work together on new technologies, new ways of cooperating between jurisdictions and new ways to become more efficient.”

Sandford stressed the importance of water retention in soil in adapting to climate change.

“What we really need is another green revolution but this time also focused on soil health as a means of mitigating and adapting to extreme weather events such as drought and floods,” he said. “This basin could very well be a leader in that revolution. There’s no reason that revolution can’t start here. The pieces are all here. The key may be to break the barriers to jurisdictional cooperation.”