Tired of bad books, Berthold woman writes her own

BERTHOLD Sandi K. Whipple worked as an air traffic controller in the U.S. Army and later worked for decades in the hospitality industry, but she had never planned on becoming a writer.

That was until 2007, when she had surgery and was in a wheelchair for 11 weeks. During the long weeks of recovery, Whipple found herself reading multiple Harlequin romance novels. One of them was so badly written that she put it down in disgust and told a friend that she could write a better one. Her friend told her she should do it.

Thus was born “Twisted Engagement,” the love story of Lilly, a successful entrepreneur, her twisted ex, David, and her new love, Glenn. A few months later, Whipple, still recovering, decided to write another. “Loving Adonis, ” told the story of Angie and her path to true love with Gary.

Whipple sent the book to friends, who all liked it, but she never thought of trying to take her writing further. She put the books away in a drawer. But then last December a friend persuaded her to give her books a wider audience. Whipple took the books to Patti Kurtz, an associate professor of English at Minot State University, and asked her to look at a few chapters. Whipple said Kurtz told her the unpublished books were good, but gave Whipple a few suggestions to improve her wriitng, such as “showing rather than telling” and making the dialogue sound more the way people really talk and less “perfect.” Whipple also found a copy editor in Connecticut who also worked on the books.

Whipple self-published the books in January and March through Createspace for Paperbacks, an affiliate of Amazon. She has been thrilled with the number of positive reviews her books have gotten online and how well the books are selling.

The books can be printed as needed. They are being sold at Main Street Books in Minot and are also available through online booksellers such as Amazon and Barnes and Noble, among others. More information can be found at Whipple’s website at (sandikwhipple.com).

“Now I’m writing a book and I’m having a ball with this one,” said Whipple.

Her newest romance is called “Dancing with a Cowboy.” It tells the story of Lucy, a lawyer in Philadelphia who ends up stuck on a working ranch with no phones, cell service or high speed Internet. Then she meets a handsome cowboy …

Whipple can launch her latest career from the house she bought sight unseen on the Internet back in 2000. At the time, she was living in California, but wanted a change. She didn’t feel she could retire in California because of the higher cost of living there. She took a job in the Minot area and purchased the house she found on the Internet after looking at pictures of the house and the town. Once she moved here, she quickly made friends and learned to adapt to snowy roads and cold North Dakota winters.

She said the only mistake she made in moving to North Dakota is not having done it 35 years ago. 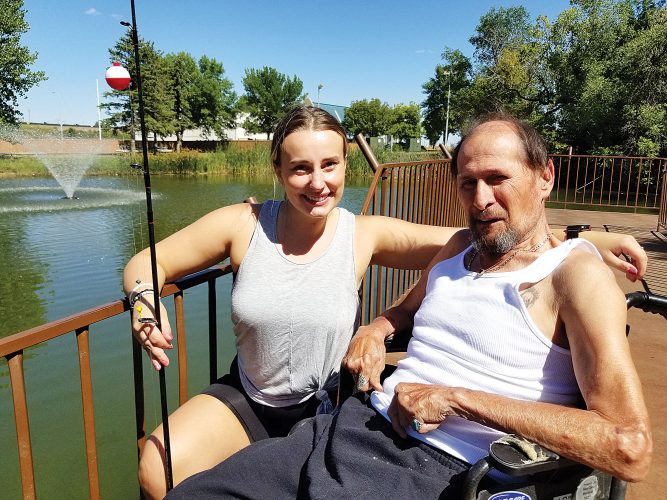 Dakota Cruisers Car Club of Minot will dedicate its cruise on Broadway on Wednesday to “all of the small ...