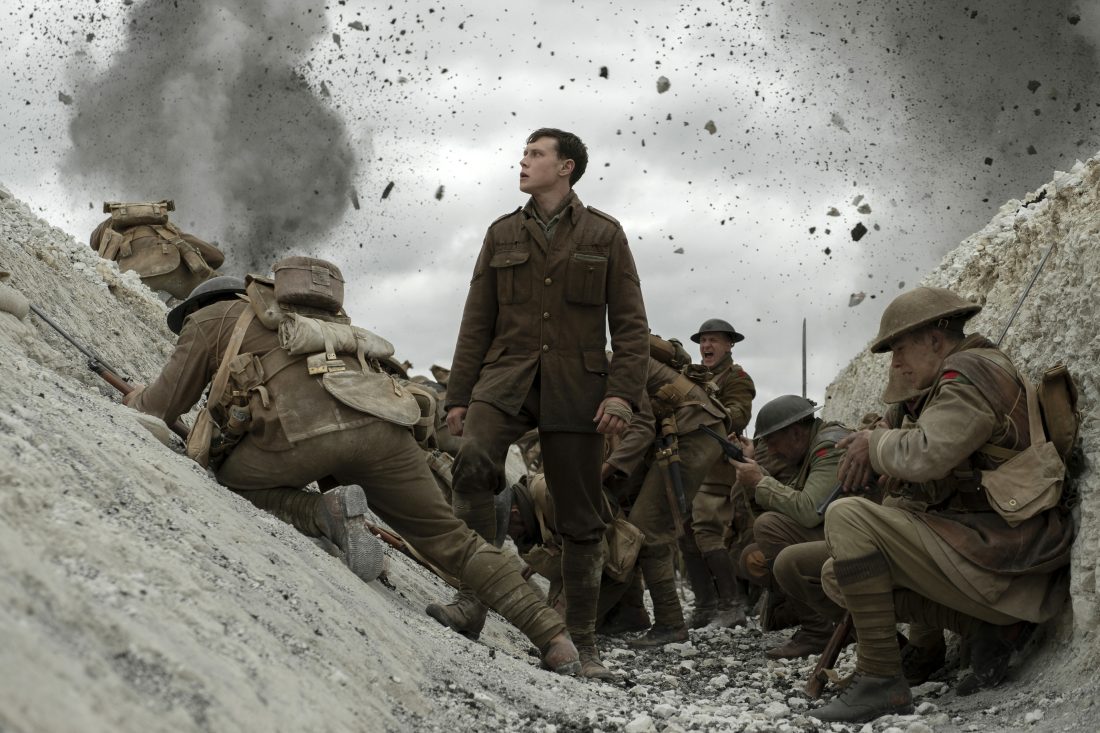 It’s been a good time for World War I buffs — especially if they’re also movie buffs. A year ago director Peter Jackson applied state-of-the-art technology to century-old war footage to bring the Great War alive with sudden, stunning immediacy in his documentary “They Shall Not Grow Old.”

And now, in the feature film “1917,” another of our most talented directors, Sam Mendes, has similarly taken top technology — and the best cinematography, courtesy of Roger Deakins — to give us a different, equally compelling look at that cruel war, through the eyes of two ordinary soldiers asked to perform an extraordinary task.

The special sauce here, which you may have heard about: “1917” appears as if it were shot in one seamless take — or two, if you include one spot where it seems clear a break probably occurred. Actually, there are dozens of cuts, but they’re ingeniously hidden by editor Lee Smith, and the longest continuous shot is only about eight minutes.

Yes, it’s a dazzling technical feat. One could also consider it a gimmick, or at least a method that threatens to distract the viewer’s attention. But that ignores the fact that this very filmmaking style is also hugely effective at delivering this particular story, in the most visceral way possible.

It’s a tale — inspired by stories Mendes heard from his own grandfather, who fought as a teenager — of two frightened young men, utterly unprepared for what they’re asked to do. And really, who WAS prepared? These were boys. If in Jackson’s documentary the most sobering sight of all was those frightened faces, many belonging to teens who’d lied about their youth in order to enlist, these shellshocked faces come alive here in the form of lance corporals Schofield and Blake — George MacKay and Dean-Charles Chapman, relative newcomers chosen to enforce the idea that these were unremarkable, ordinary men.

The action begins in the afternoon of April 6, 1917, in northern France. Schofield and Blake are resting under a tree when a commanding officer orders Blake to “pick a man and bring your kit” — it’s not clear why. Blake enlists Schofield, and the two men head to the trench. As they walk, the camera gradually pans wider and we see a field full of soldiers, more and more of them, resting, talking, doing their laundry.

In the trench, General Erinmore (Colin Firth, one of several British stars, including Benedict Cumberbatch, Mark Strong and Richard Madden, who appear in brief cameos) describes their mission. It’s immediately clear why Blake was chosen. His older brother is part of a battalion planning to attack the Germans, believed to be retreating, the next morning. But the men — 1,600 of them — are heading into a trap, and will suffer catastrophic losses unless they can be stopped. The enemy has cut off all communications. “They have no idea what they’re in for,” says Erinmore, tersely.

The mission: to venture out into No Man’s Land and make the daunting journey on foot to warn the battalion, waiting in the woods near the town of Ecoust. Their only supplies: maps, torches, grenades, a little food, and their kits — oh, and a flare pistol given to them by Lt. Leslie, commander of the Yorks (a wonderfully wry Andrew Scott of “Fleabag,” providing a few seconds of what passes for levity), who seems fairly sure the lads won’t make it back alive.

As they climb out of the trenches and head into perilous territory — abandoned and desolate, piled with corpses of men and horses — they get to know each other better. Blake, the younger at 19, is chatty, humorous, good with maps and always at the ready with an amusing anecdote. He’s also starry-eyed about battlefield glory, and aspires to a medal. Schofield, a few years older with a bit more experience, is less talkative, more stoic, and also more cynical. He won a medal but traded it for a bottle of French wine.

We travel with these two young men as they traverse a hellish landscape, sometimes stepping on bloated bodies or running into a sun-bleached skeleton or burned corpse encased in barbed wire, with the camera usually following just behind as we share this real-time adventure. We’re drawn into a recently abandoned German trench, where the men marvel at how even the enemy’s rats are bigger and stronger. They survive explosions, nearly get hit by a crashing plane suddenly plummeting into the screen, and suffer a horrible setback at one point on the journey.

Both young actors are hugely appealing. MacKay in particular delivers a breakout performance that somehow feels both contemporary and timeless. You could call his Schofield a reluctant hero, but that doesn’t seem to sufficiently capture the essence of a young man who didn’t choose his fate — “Why did you choose ME?” he rails at Blake at one point — but slowly and surely rises to the occasion with determination and assurance born of utter necessity. You may not soon forget MacKay’s face.

You also won’t soon forget a moment of sheer beauty that suddenly materializes amid the terror: A ruined French town at night, floodlit against the dark sky by a raging fire in the distance, while the score by Thomas Newman soars. There’s also a climactic visual sequence that takes the breath away — to say any more would risk revealing too much plot.

By the end, chances are you also won’t remember that you began the film trying to outwit the filmmakers and figure out the tricks behind their technical magic. Some good, old-fashioned storytelling magic has taken over. Mendes has done justice to his grandfather’s tales.