Will you make it out in time? 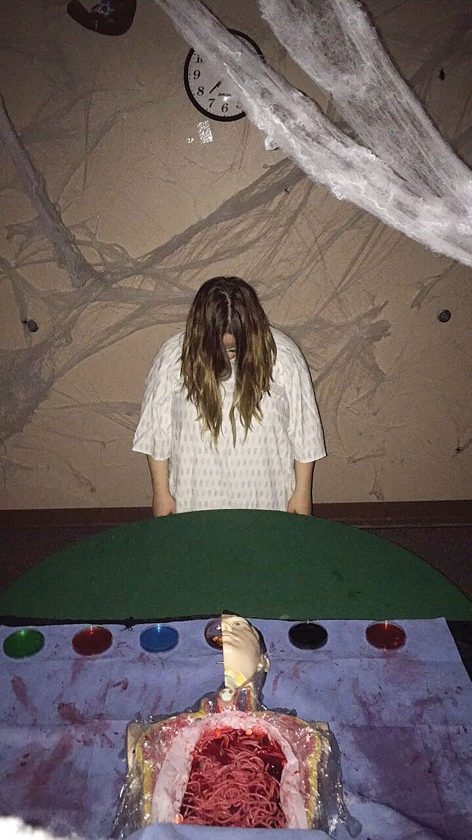 Submitted photo A patient stands over a body being experiemented on in the morgue at the Minot High School Health Occupations Students of America club’s escape room last year. This year, the club will have three different escape rooms to choose from, each with spooky storylines perfect for Halloween fun.

A mad scientist’s lair, an abandoned asylum and a creepy morgue await those that dare try to escape at Magic City Campus this weekend. Minot High School’s Health Occupations Student of America club is hosting escape rooms Saturday from 6-11 p.m. and Sunday from 4-8 p.m.

People will have three different escape room options, and the rooms are $5 per person, per room to solve. Being the weekend before Halloween, the club hopes to catch people making their rounds of haunted house activities. The escape rooms will also be running at the same time as the MHS Playmakers’ production of “The Little Mermaid,” which will help generate traffic throughout the school as well.

The medical club is relatively new to the school in their third year. Last year they hosted a haunted house and escape room for Halloween and with the overwhelmingly positive feedback from the escape room, they decided to set up three different options this year.

“We have a mock hospital setup here so it makes a really interesting haunted house and it’ll make a really cool escape room too,” HOSA club co-president Megan Major said. “A lot of creativity goes into the escape rooms, especially for the puzzles — designing the puzzles and then putting together a room that looks scary but it’s also functional.”

Major said the escape rooms are more logic based with spooky storylines that will get people thinking while also giving them a bit of a scare and that sets them apart from the traditional haunted houses offered in the area.

Returning from last year is the Mad Scientist escape room. A medical examiner at a morgue has locked people in his office and it’s up to them to find a way out before he comes back to conduct experiments on them.

One of the new rooms is an Insane Asylum where people will need to solve puzzles and find keys to make their way out.

The final room is an Abandoned Morgue, where a doctor has given a patient poison. The patient is still alive but only has 15 minutes left to live. It’s up to the people in the room to find the antidote and save the patient from becoming another body in the morgue.

The escape rooms hold three to six people at a time, making it a great family activity or a good opportunity to gather some friends together for a “spooktacular” time.

The escape rooms are hosted as a fundraiser for the club to help fund different opportunities for the group.

“We get to tour different parts of hospitals or have speakers from the medical community come and share their experiences,” Major explained. “It’s just a lot of really cool opportunities we wouldn’t have otherwise.”

The fundraiser will also help fund the club’s competition trip, similar to Science Olympiad, that is a knowledge and skills test for students to practice skills in whatever occupation they are interested in.

“Last year we traveled to Florida for the national competition and the year before that we traveled to Houston,” Major said. “The more money we raise, the more people can attend those trips.”

HOSA is made up of around 40 students between Central and Magic City Campus with about 25 of the students working on the escape rooms project.

The escape rooms can be accessed from Door No. 9 at Magic City Campus, located at 1100 11th Avenue SW. Contact minot.hosa@gmail.com with any questions.