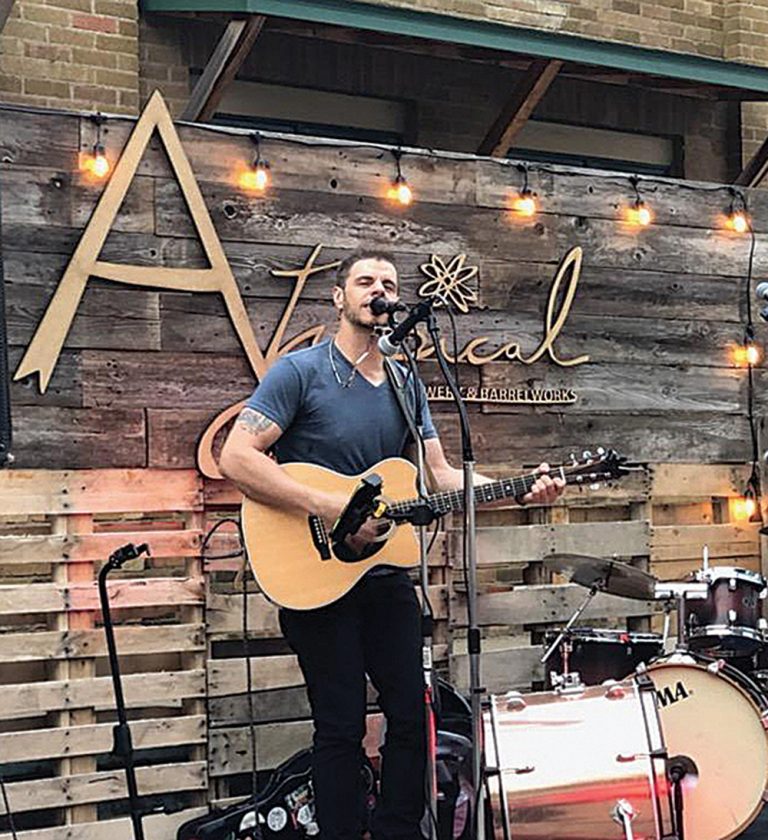 Myles Barcomb will be releasing his first studio album “Henhouse” with an album release party Saturday at Atypical Brewery & Barrelworks.

Myles Barcomb isn’t exactly a newcomer to the Minot music scene. He is, however, presenting his brand new studio album “Henhouse” with a release party at Atypical Brewery & Barrelworks in downtown Minot Saturday.

In addition to his solo projects, Barcomb was also a part of The Morning Red, which is making a comeback and will be performing at Atypical Saturday, and is currently a member of Soulshine.

Barcomb has had the album for a while and decided now, after some life changes, it was time to release the album to the public.

“I’ve been really comfortable (performing) in Ebeneezer’s, I have this kind of easy platform, I can play music all the time,” Barcomb said. “My kids are older now so it’s to the point where I have the opportunity to actually leave town and do different things if I want.”

Barcomb also wrestled with self doubt in his music and if putting the album out would be worth it.

The album came to be from a studio session Barcomb was sitting in on in Nashville, Tenn. with some friends. He decided since he was there, he would record some of his own stuff as well.

“Some of these songs have been around for a while and stuff I was doing with The Morning Red so it’s like I’ve had these songs that haven’t been out and people have been asking to hear them on a CD,” Barcomb said. “Here it is, finally.”

Barcomb has tried to record on his own and in small studio settings in the past but nothing ever had the right sound to it. Finally, with the process they used in Nashville, Barcomb was satisfied with the sound and proud to add it to an album to share with the public.

“There’s something that doesn’t sound live enough when you’re doing it on your own,” Barcomb explained. “We recorded on analog tape (in Nashville) like it’s 1980s equipment and that stuff goes into the computer and you just get a really rich, full tone with recording that way. When you listen to it, your ear picks it up like it’s something familiar already.”

The one-man band has roots in soul, rock, bluegrass, indie, blues and classic country. The Morning Red has a more indie rock sound with a folk twist.

“My voice is pretty soulful and I’ve got kind of that raspy tone when I sing,” Barcomb said. “I play a wide variety of music but this album is mostly a bluegrass kind of sound.”

Barcomb picked Atypical Brewery & Barrelworks for the release party due to his connection with one of the owners, Nick Holwegner, and the fact that it is a new, up and coming hub for the local music scene.

“It’s such a great venue out there, I love it,” he said. “That’s my favorite venue in town right now.”

Because it’s going to be in courtyard, the album release party is open to all ages. This will be Atypical’s last outdoor event of the year. Doors will open at noon and music will begin at 6:30 p.m. Food will be available from The Hitchin Kitchen and the brewery will be offering their three new brews: Street Dog Red, The Spice is Right and V for Vienna along with some of their other beers.

Local band Marigold will open the evening. Performing alongside Barcomb will be The Morning Red. Barcomb’s album “Henhouse” will be available along with some merchandise.

To stay up to date on Barcomb’s musical journey, check out his website, www.mylesbarcomb.com/, or following along on Facebook @MylesAlexanderBarcomb.