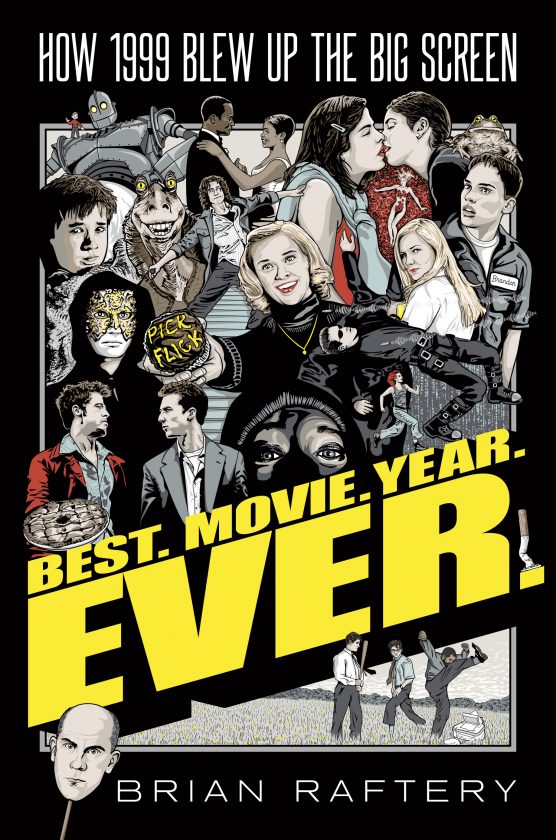 This photo provided by Simon & Schuster shows the cover of “Best. Movie. Year. Ever.: How 1999 Blew Up the Big Screen,” by Brian Raftery. Culture writer Brian Raftery wants to argue that 1999 was the best movie year ever. Similar claims have been made about 1939 (“Gone With the Wind,” “The Wizard of Oz,” “Stagecoach,” “Mr. Smith Goes to Washington,” among others). The staff of The Washington Post recently cited seven different years, including 1939 and 1999. Raftery himself points to 1939 and three years the Post excluded: 1967, 1977 and 1985. (Simon & Schuster via AP)

(AP) — Everybody’s entitled to their opinion, especially when it comes to the movies. Somewhere out there is a person, maybe even two, whose all-time favorite is “The Boy Who Could Fly.”

So, if culture writer Brian Raftery wants to argue that 1999 was the best movie year ever, let him go for it and enjoy the ride. Similar claims have been made about 1939 (“Gone With the Wind,” ”The Wizard of Oz,” ”Stagecoach,” ”Mr. Smith Goes to Washington,” among others). The staff of The Washington Post recently cited seven different years, including 1939 and 1999. Raftery himself points to 1939 and three years the Post excluded: 1967, 1977 and 1985.

Let’s forget the clickbait title for a moment. Raftery’s book works best — and works rather well — as a report on moviemaking as it existed two decades ago. New elbows were being thrown in the age-old struggle of art and commerce, thanks to technology, politics and social divisions. The year 1999 carried itself with an economic swagger, but it strutted in the shadow of the Clinton impeachment and the Columbine massacre — and the looming Y2K threat. These events had an impact because movies aren’t made or viewed in a vacuum.

What makes a movie year the best ever or even good? For Raftery, those years are “ones in which film took an almost teleportative leap forward, reinventing and reviving itself in front of our very eyes.”

“The Blair Witch Project” scared plenty of ticket buyers but may be most notable for its pioneering online marketing. “Fight Club” was an edgy satire about manliness that too few people appreciated at the time, “American Pie” and “Cruel Intentions” helped reboot the teen movie, “The Matrix” had a mind-blowing plot as well as eye-popping special effects, and “Three Kings” and “The Limey” reinvigorated the caper genre. Importantly, “The Best Man” and “The Wood” showed studios that black-themed films could make money, too.

But then there’s that title. Does Raftery make a convincing argument for 1999 rising above all others? Not when he writes that “pretty much every movie year is a good one, even if you have to do some searching to find the masterworks or minimovements.” Well, if almost every year is a good year … readers will be forgiven if they utter the same b-word exclamation shouted by some at the end of “The Blair Witch Project.”

Raftery concludes that in 1999 “multiple generations of filmmakers came along and started a counterinsurgency that would reshape the culture for years to come.” Didn’t some of the other “best” years do that, too? And noting that many of those films are referenced today, arguably, says more about the currently dominant generation and its touchstones than the quality of the films they harken back to.

Another rough season ends with Wolves near bottom of league