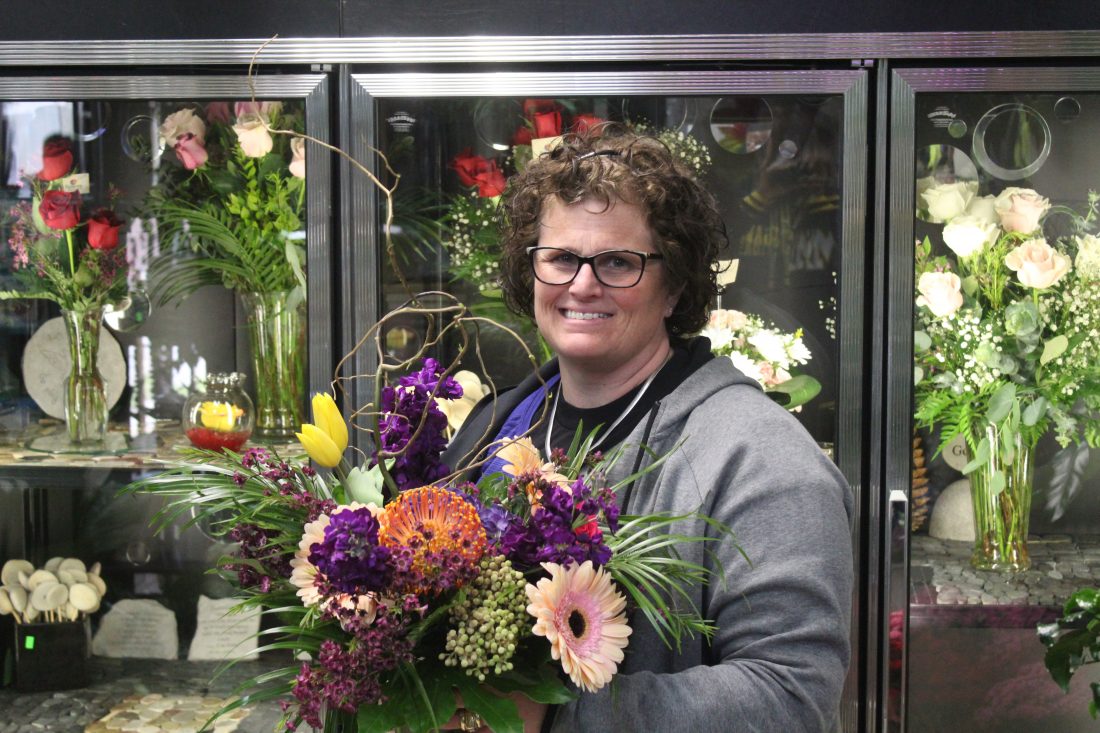 Brandon Carr/MDN Niki Nygaard, the owner of Flower Central, poses in front of her floral merchandiser while holding a bouquet inside her shop.

Kathey Medlin Keller of Perfect Petals in Harvey had just filled her big cooler with flowers when the COVID-19 pandemic hit North Dakota in March.

“We’re talking several thousand dollars worth of flowers, during a global shutdown. Connected next door to my floral shop is the antique, coffee, wine, beer, jewelry & gift shop called Ta Ahni, which I own also. We had to shut down that shop as well and do curbside delivery for both establishments,” Keller said.

In a bind, Keller started working the phones. One of her first calls was to the president of St. Aloisius Medical Center, Mike Zwicker. She wanted to know the proper procedures and protocols for deliveries regarding the patients in the hospital.

“I didn’t want to know who the patients were. I just wanted numbers,” she said. “Instead of having all these fresh flowers and arrangments wither past their prime, I asked if we could send flowers to the hospital, and he obliged.”

After receiving the numbers and the OK from Zwicker regarding a project she had in mind, Keller placed phone calls to enlist 26 local businesses and two individuals – Susan Bartz of Harvey and Keller’s sister Regina Martin of Cookson, Okla. – in the project. 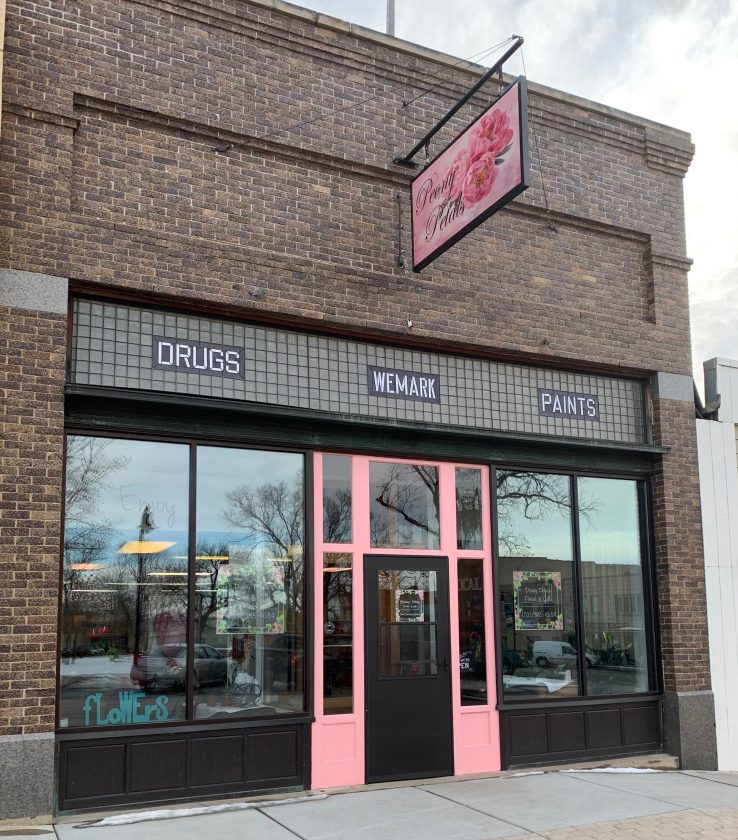 The plan was for each business to donate the typical cost of a bouquet. Keller got the ball rolling when she decided to pay for 25 herself. Because it was such a good cause, Keller received donations of up to $300 per business.

“Our project received such a good response from the community, especially those in the nursing homes whose family aren’t able to visit. I received so many phone calls from families who wondered where these beautiful arrangements came from. Each flower came with a card that read, ‘We want to make your day better,’ and I listed all of the businesses that helped me do that,” Keller said.

Including herself, Perfect Petals, two full-time employees, two part-timers, and two volunteers created 80 bouquets the first week, sending some to nursing homes. The following week, they created 20 more giant bouquets for each department in the hospital as a token of appreciation.

“Engaging through signs outside of their parents’ and grandparents’ windows, people started realizing that their loved ones became lonely, so orders for flowers began to flow. After about three weeks, my business began to recover,” Keller said.

After 60 days of coronavirus restrictions, Perfect Petals re-opened its doors to the public last Friday. Current store hours are Monday through Friday from 7 a.m. to 4 p.m.

Like Keller, Tami Chrest of Peony Petals Floral & Gifts in Kenmare said her company felt the impact of the pandemic, but in a good way. She said they had some excellent days regarding production and traffic for online orders.

“Mother’s Day and Easter were good,” said Chrest. “We’ve been closed, so we didn’t have foot traffic in here, but we kept busy with curbside pickup and deliveries. If the customers ordered online for store pickup, I would practice non-contact curbside pickup for their safety and ours.”

As the owner, she’s predominantly a soloist, but during busy times like holidays and special events, Chrest employs eight to 10 people. Current hours of operation are Monday through Friday from 9 a.m. to 5 p.m.

Like most business establishments, Peony Petals’ store hours changed due to the pandemic.

“We kept our doors locked for a short period in preparedness upon arrival for the customers’ safety as well as ours. Disposable gloves, face masks and hand sanitizers were present for personal use when customers arrived,” Chrest said.

Chrest said although the position can be demanding, one of her most meaningful goals as a florist is to make each customer smile.

“It’s a lot of hard work, especially during those extremely long days; But the results achieved at the end of the day are advantageous,” she said.

The same went for Niki Nygaard of Flower Central in Minot as her business has been busy during the pandemic since people are steadily sending flowers and plants to their loved ones.

“During the week of Mother’s Day, I stood on my feet for over 80 hours designing flowers,” said Nygaard. “Being a florist is fun as it keeps you busy, but it’s very demanding as the holidays are crazy.”

When operating during non-holidays, Flower Central regularly staffs nine employees. During holidays Nygaard said she fluctuates due to high demand. To meet the needs of the customers, she employs 16 workers to have more hands available for deliveries and curbside assistance.

For example, in the week of Mother’s Day, she had six vans running concurrently each day to help deliver to customers.

Following strict guidelines during the pandemic, Flower Center has limited the shop to two to three customers inside at a time. Upon arrival, if customers decline curbside assistance, they are offered rubber gloves or hand sanitizer before entering the shop.

“We have to change how we do things now and then,” said Nygaard. “Like when we hand out deliveries, we call ahead to have the customers meet us at the door. We set down the order on their doorstep, so there’s no hand-to-hand contact.”

Flower Centrals’ hours of operation are Monday through Friday from 8 a.m to 5 p.m.

Flower Central, Peony Petals Floral & Gifts and Perfect Petals are gearing up for Memorial Day and the festivities of graduations. Each shop is up and running and ready to deliver special requests for the desired families.

Jill Schramm/MDN Thrivent Action Team volunteer Abby Haff carries a load of items from a motel room Saturday during cleanup of the grounds and buildings at 1901 S. Broadway, the site of the future Broadway Circle project.

Submitted Photo A B-52 bomber from Minot Air Force Base will fly over medical facilities in Bismarck, Fargo, Grand Forks and Minot today for an Air Force Salute to essential workers. Photo by Airman 1st Class Jesse Jenny.

Submitted photo In preparation for Memorial Day next Monday, a Wall of Honor display was erected at the bell tower this past weekend in Rosehill Memorial Park that lists more than 400 names of those who have participated in the annual Wreaths Across America since 2014. A statue of a soldier kneeling by a cross is shown in front of the wall.

Brandon Carr/MDN Niki Nygaard, the owner of Flower Central, poses in front of her floral merchandiser while holding a bouquet inside her shop.

Eloise Ogden/MDN Drilling activity has slowed in North Dakota due to the oil price, according to Lynn Helms, director of the N.D. Department of Mineral Resources.

Submitted Photo Patti Kurtz walks with her beagle named Elanor while searching for things that catch her eye to photograph.

Kim Fundingsland/MDN Mark Jorgensen, Antler Cemetery Association, has been very active in the restoration of the historic Pioneer Cemetery situated on the north bank of Antler Creek, a short distance from the Canadian border.

Submitted Photo Patti Kurtz received her master’s in the fine art of writing popular fiction from Seton Hill University in Greensburg, Pa., in 2016.

Alex Eisen/MDN Minot High boys hockey assistant coach Jordan Willert stands behind the bench while the Magicians celebrate a goal scored in a game played this past season at Maysa Arena in Minot.