Singing comes from the soul 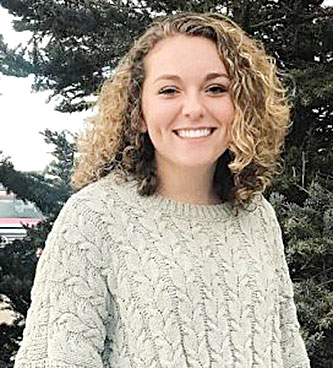 A Minot High School Central Campus sophomore was given an opportunity of a lifetime to audition for the 2020 High School Honors Performance Series at Carnegie Hall. Jersey Johnson made the audition and traveled to New York City to perform on Feb. 2.

She did private lessons with Rebecca Petrik with Minot State University to make more progress. Over time, Johnson became comfortable with her voice. When she sings solos for auditions, Italian is her language of choice. When singing in groups, African music makes her want to move while she sings, and “you can just tell that it comes from deep within a person’s soul.” It also makes the audience want to dance, too. “I really enjoy trios,” she said. “Each person has their own part, but I love the way the voices blend.”

What really made her gravitate toward music was how it made her feel. “When I sing, it’s almost like it takes away everything.” She wants to show the world who she is by singing for them. Her singing comes from “deep within” her, so she would be sharing her passion through her voice.

Singing in one of only five Honors Ensembles “is limited to the highest-rated high school performers from across the world,” her mother, Stacy Johnson, said.

She was able to get where she is by becoming a member of the Western Plains Opera Youth Ensemble and singing in the Central Campus High School Choir. Johnson also took part in the Northwest Music Festival, All State Choir, and starred at Western Dakota Association State.

Upon hearing that the Honors Selection Board accepted her, Johnson said, “Not only do I have the opportunity to go to a large city where musical dreams prosper, I also have a once in a lifetime chance to work with Grammy Award winning conductor Jeffrey Redding on Carnegie Hall stage with students from around the world. So many people locally have inspired and supported me with my passion for music. I’ve had wonderful music and choir teachers in Minot. Mrs. Schaefer, Mrs. Speiser, Mrs. Rasch, Mrs. Kerzmann, Dr. Petrik, and Dr. Eads have been superior to work with! My great-grandma Alma who’s almost 94 has also been an inspiration. She has a deep passion for music that we both relate to. When we sing it comes deep within our souls. I feel the most complete as a person when I’m singing!” according to an email sent by Stacy Johnson.

Johnson expressed how grateful she is for the opportunity and for her mother insisting that she try out. Her mother didn’t have to think twice about the audition. She admitted that she didn’t actually open the envelope. She just handed it to her mom. Her mom read the letter and said she should give it a shot.

When Johnson left for New York City, her parents and sister were planning to go along. Her sister wants to see the Color Factory, but they will have to go with their chorus group. NYC is a very big city and getting lost is easy, so Johnson has to have a group leader’s phone number on hand just in case she does get lost. The group will have a lot of rules, she said, to be sure everyone stays together and safe. She also said her grandmothers, aunt, and uncle would also make the trip to see her perform.

The young singer said she is very grateful that her parents are letting her travel to New York. The expenses were out of pocket for everyone involved.

Performers from 47 of the United States, several provinces of Canada, Guam, the Bermuda area, China, Mexico, Qatar and several more will be be attending, as well.

Her immense love for singing is causing her to debate back and forth about what she wants to do. For a while, Johnson wanted to become a veterinarian to help animals in need. She’s looked into veterinarian schools, such as North Dakota State University and Iowa State, and music schools like Juilliard.

When it’s decided what she would like to go to college for, she said she may consider playing soccer if the school had a team. On the other hand, focusing on her grades is very important so she can be successful. If she decides to focus more on her grades, an adult soccer league is always an option. Hockey is also a sport she plays in high school but she doesn’t think it’s something she would want to do in college.

She hopes one day to possibly go to Australia and sing in the music hall in Sydney, depending on how it goes at Carnegie Hall. The Voice and American Idol have also been on her family’s minds. If auditions are happening somewhere close to North Dakota, Johnson said she would love to go.

The only thing holding the young singer back is the idea of “how hard it is to make it.” Singers like Adam Lambert and Kelly Clarkson got their major start in music through American Idol, whether they won or not. It was hard work and they had to work their way up.

Johnson’s motto is “All you can do is try.” That’s what she’s going to do to reach her goals: try her best.