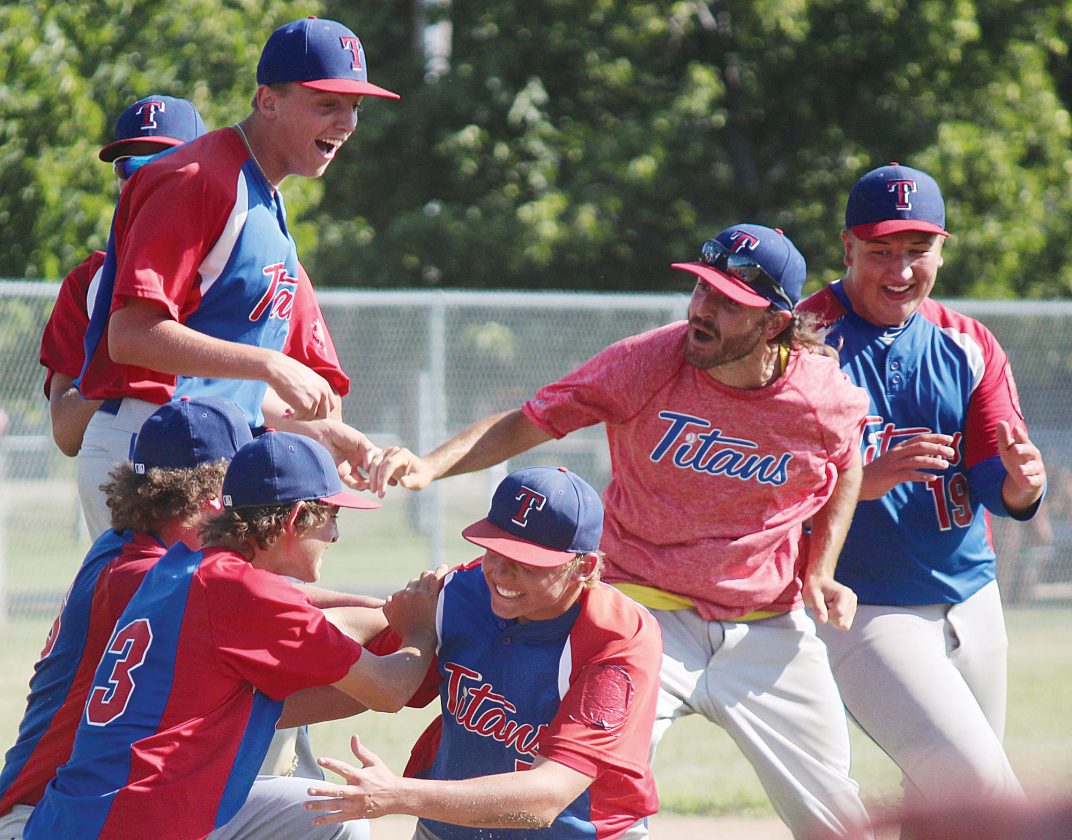 VELVA — From a venue change to a pitch count violation that resulted in a costly forfeit, bizarre circumstances defined the last two days of the Class B Independent District 2 Tournament.

When everything was all said and done, the Garrison Titans emerged as the tournament champions with a 4-2 victory over Renville County Thursday evening in Velva. Not Stanley, where the double-elimination tournament started on Monday.

“Yesterday in Stanley, the mound was honestly unplayable,” Garrison head coach Luke Gehring said. “Our assistant coach did some really good fieldwork on it, but it wasn’t going to be ready for today. So, we moved it to Velva. This was the most neutral site we could find.”

Velva had just finished hosting its Class B Independent District 3 Tournament on Wednesday. The 39ers defeated Rolla by the same score, 4-2, in the title game to earn their spot at the state tournament next week in Minot.

Both teams in the District 2 championship game were going to get spots at the state tournament as well. Renville County thought they had already locked up their state berth by beating Garrison 8-4 on Wednesday. But, an appeal turned things upside down. 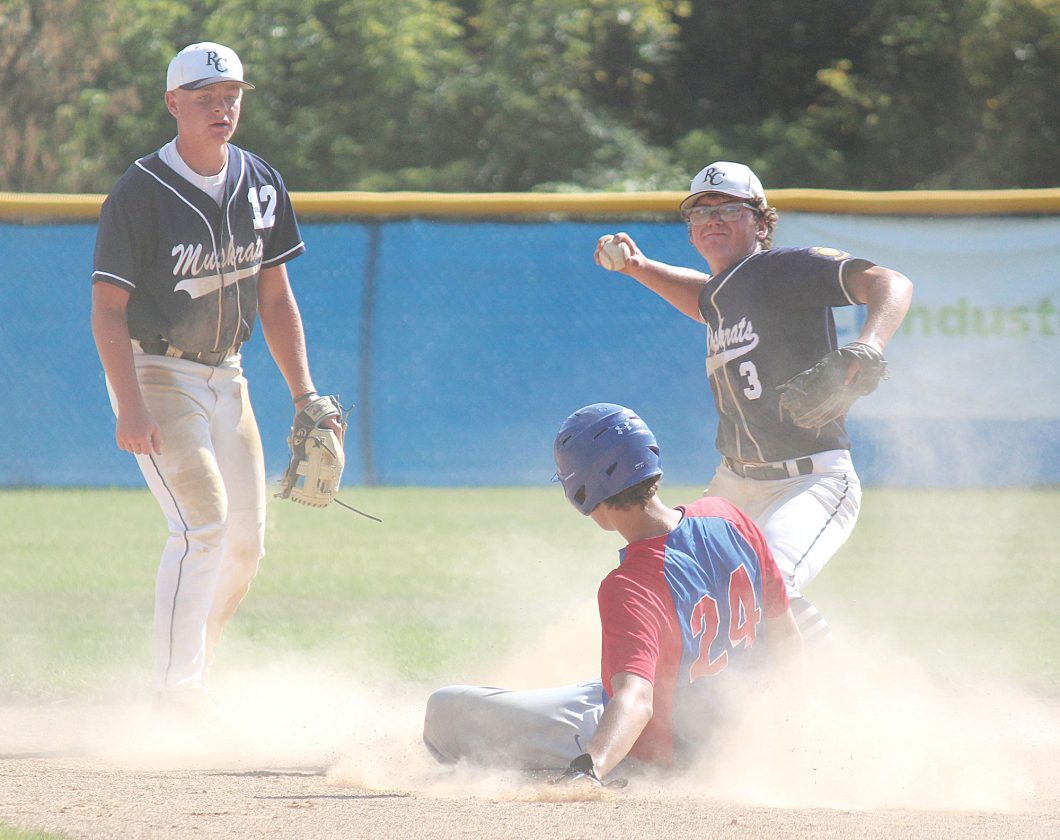 “(Renville County) pitched a kid who went over the pitch count,” Gehring explained. “The tournament manager in Stanley told them that he went over on pitches and they continued to pitch the kid. So, it resulted in an automatic forfeit.”

That dropped Renville County back into a state qualifier game Thursday afternoon against Surrey. The winner would face Garrison right after in the tournament championship game.

The Muskrats needed nine innings in a scrappy 2-1 victory to fend off Surrey and earned its place back in the title game.

“It was a grind,” Renville County head coach Bart Savelkoul said. “It was a tight game and nobody was really hitting the ball on either side. We got a couple of breaks at the end.”

Pitch counts were given loud and clear over the loudspeaker at Buen Field in Velva, and chirping from both dugouts was common in the title game. It was evident this was a grudge match from earlier in the tournament.

Defensive web gems and pitching dominated the affair early on. Through three innings, both teams only mustered one hit — singles for Garrison’s Seth Roedocker and Renville County’s Dalton Moberg.

The Titans snapped the scoreless stalemate in the fourth inning.

With the bases loaded, Jack Bright powered a two-run double down the left-field line for the first runs of the game. Pitcher Bennett Kamp then helped his own cause with an RBI single back up the middle. The fourth and final run crossed home plate via a throwing error following a fielder’s choice.

“Our kids had a little pep talk in the dugout before they went out there,” Gehring said. “They said, ‘Let’s focus up, square up some fastballs and get things going.’ The energy was unbelievable today, and they rallied around that contagious energy.”

The Muskrats finally got their bats going in the bottom of the fifth inning. Bryden Santos showed off his wheels with a triple and then jogged home on an RBI single by Zane Wenstad. An RBI sacrifice fly by Gannon Hall cut the deficit to 4-2, but the runner between second and third base was tagged out to end the inning.

Kamp settled back in and didn’t look back. He allowed one base runner in the final two innings to wrap up his complete-game performance.

“I was locating my fastball down and low to get ground balls, and my curveball was working pretty well and they were popping those up,” said Kamp, who allowed two runs on five hits. “I knew if I threw strikes, my teammates would get the outs. That’s what they did.”

The final out was a diving catch made by center fielder Dawson Wimer. The Titans celebration was two-fold. First, Wimer was greeted by fellow outfielder Roedocker before everyone else started to jump into each other’s arms in the infield.

“This is amazing,” Kamp said. “We have been dreaming about this since we were in Little League. In Babe Ruth, we lost out on going to state and this year we will get to go. So, that’s awesome.”

As mentioned before, Renville County will also be going to state with two District 2 teams making the eight-team field. A welcomed prize after everything that has happened to the Muskrats this week.

“It’s been an interesting week, that’s for sure,” Bart Savelkoul said. “It’s been a long 48 hours. Let’s put it that way.”

The state tournament will be held August 7-9 at Corbett Field in Minot.

Alex Eisen/MDN Souris Valley Sabre Dogs outfielder Tim Conway (10) exchanges high-fives on his way back to the dugout Thursday evening at Corbett Field. After splitting the first two games of the series, the Sabre Dogs and Badlands Big Sticks squared off once more on Thursday. The Sabre Dogs won 8-4. 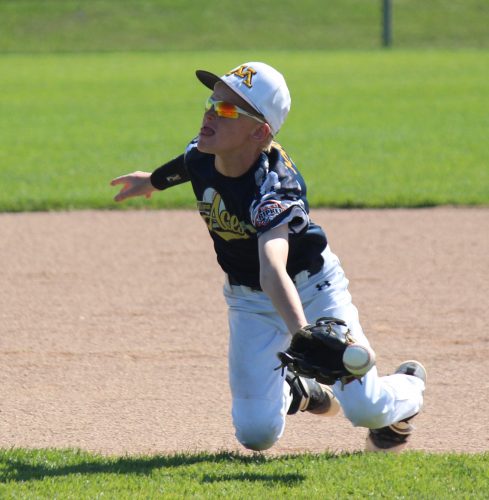 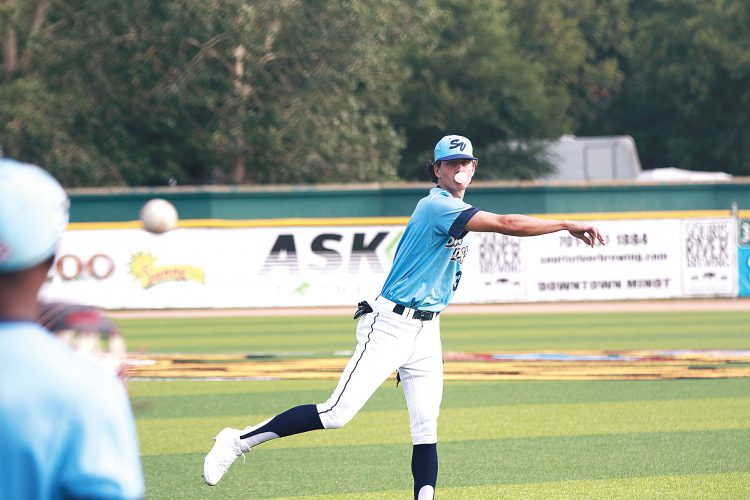 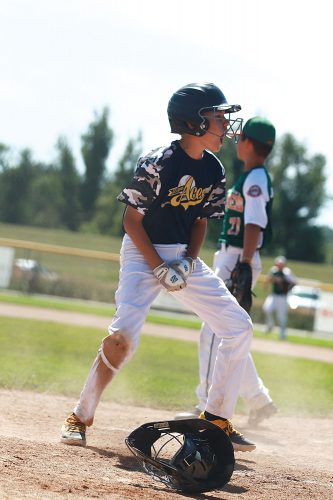