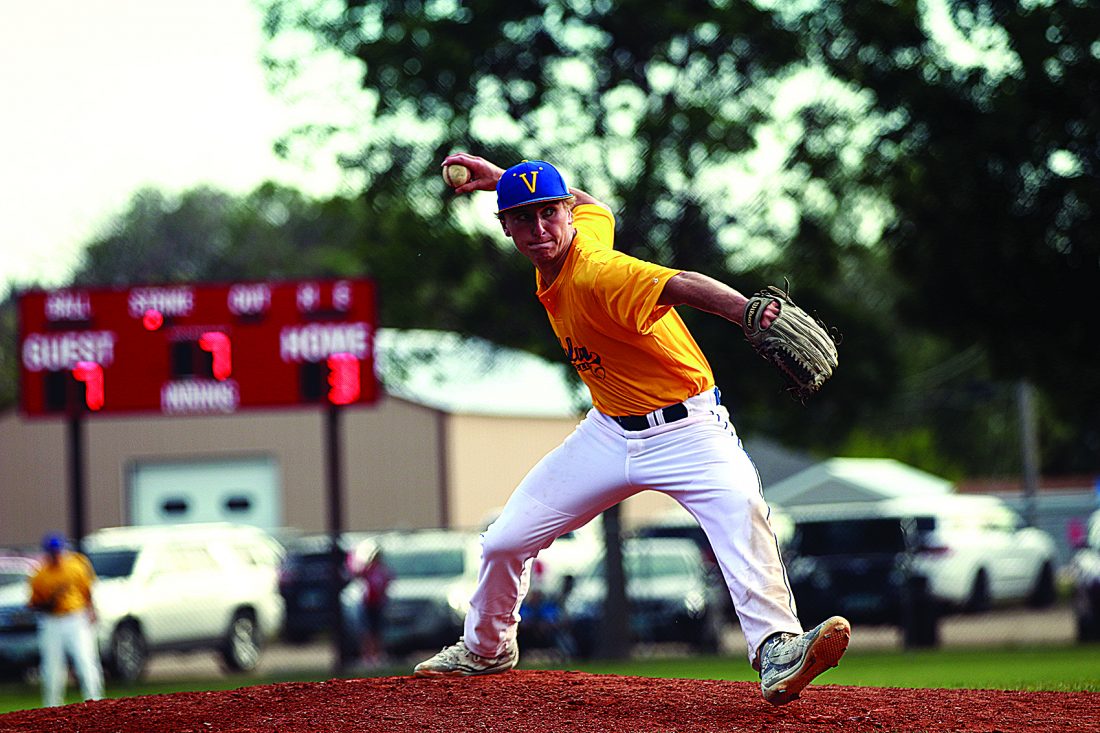 Jimmy Lafakis/MDN Velva pitcher Michael Thomas prepares to throw a pitch during Game 1 of Wednesday's doubleheader in Burlington. The 39ers earned a 7-3 win in that contest, but the Bulldogs captured a 12-4 victory in Game 2.

BURLINGTON — Gunnar Mogen dug his feet in the right-handed batter’s box early in the seventh inning. Velva trailed 3-2 in a tight situation, but the outfielder favored a simplistic approach at the plate.

“Put the ball in play,” Mogen said. “Don’t strike out. Give my guys a chance to score and keep the inning alive. Keep it going.”

His sharp RBI single down the third-base line tied the score at 3-3 during the first game of Wednesday night’s doubleheader in Burlington. Mogen’s hit became the catalyst for a five-run seventh inning in Velva’s 7-3 victory over the Bulldogs.

“My first hit of the day was a hard one down the line,” Mogen said. “It was better because someone scored off of it. It just feels good knowing that we kept it alive for another inning.”

During the initial contest, Burlington stymied Velva’s offense after the second inning. Tace Pederson smacked an RBI single through the right side in the first frame, but the Bulldogs countered with two runs in the bottom half.

Luke Zimmer’s RBI groundout in the second inning brought the score to 2-2. After a scoreless third, Burlington’s Aiden Ladd ripped a go-ahead RBI single in the fourth.

The 39ers threatened before the seventh inning. Still, none of their offensive efforts bore fruit.

“If you were watching the game, every ball seemed to be six inches against us,” Velva head coach Brent Engebretson said. “Every ball we hit went right to them within six inches. Every ball they hit was just out of our reach. Finally, in the seventh, we got a few of those to go our way. That’s baseball. If you stay positive and keep looking for good things, good things will happen.”

Mogen’s base knock breathed new life into the 39ers. Pederson’s sacrifice fly made way for Quintin Peterson’s RBI single and another sacrifice fly from Jersey Selzler. After Peterson scored on an error, Velva held a comfortable 7-3 advantage.

“That’s the second or third time we’ve asked him to do that,” Engebretson said. “He’s got a little bit of a funky delivery, so it catches you different. He does a great job of throwing strikes. We have a great defense behind him. He knows to throw the ball over. We’ll make plays. It’s really nice to be confident in that guy. He’s been there for us.”

Ryan Albertson’s RBI double gave the Bulldogs an early 1-0 advantage in the second game. The 39ers responded with two runs off a fielder’s choice and another knock that skipped along the friendly third-base line.

A combination of hits and adept plays on the bases granted Burlington four runs in the bottom of the third. The 39ers got one back in the fourth, but the Bulldogs loaded the bases with no outs and plated seven additional runs.

In the top of the fifth inning, hurler Devin McKinney finished the job on the hill. Velva scored one run on an RBI groundout before Burlington polished off the 12-4 victory.

“It’s just nice to bounce back,” Burlington head coach Matt Koronka said. “The toughest thing is to bounce back after losing that first game. The air is out of the sails. I was really happy that they came back, put some runs on the board and got that win.”

Velva will continue their road stretch against the Bismarck 15s at 5 p.m. on Friday. Burlington will head to Stanley for a pair of games starting at 5 p.m. on Monday, June 29.

The Bulldogs beat Stanley twice on June 19 in Burlington.