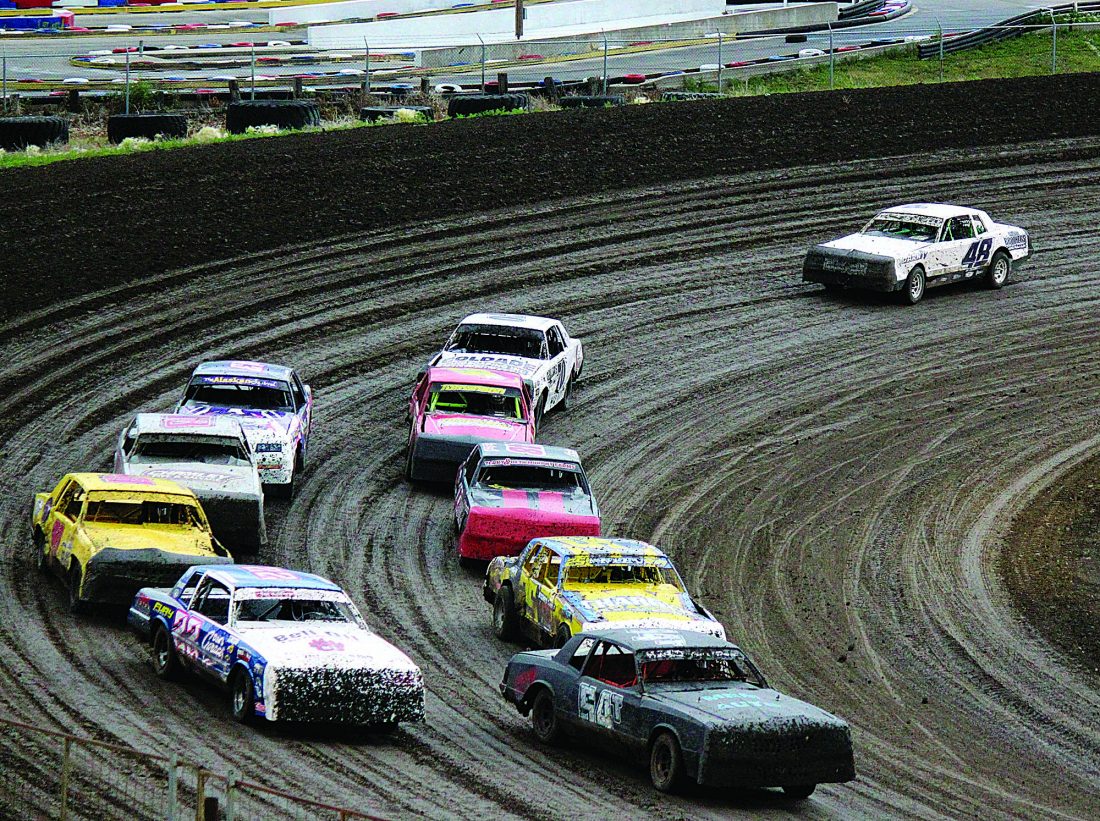 Alex Eisen/MDN The IMCA Hobby Stocks take the green flag in a heat race with Nodak Speedway announcer Nick Hulberg bringing up the rear of the field in Brock Beeter's No. 48 race car Sunday evening in Minot.

With all eyes glued on Nick Hulberg, the Nodak Speedway announcer took the green flag in Brock Beeter’s No. 48 IMCA Hobby Stock.

Hulberg talked his way into this position after Beeter offered up his car in victory lane last week to anybody that thought they could do better. Beeter, who was trying to celebrate his first win of the season at Nodak Speedway, was getting booed for a Jesse Long spinout that didn’t send him to the back of the pack.

Jokingly, Hulberg said he was booing Beeter so he could drive his race car. Well, be careful about what you wish for, as Hulberg ended up behind the wheel of Beeter’s car Sunday evening at Nodak Speedway.

Craziness ensued, including rain and a tornado watch across the region that threatened to cancel the race night altogether.

Race recaps for all four classes are detailed below.

A brief downpouring of rain postponed the first heat race of the night for 30 minutes. The IMCA Hobby Stock came out and worked the track in, which allowed Hulberg to put in some impromptu test laps.

It didn’t help much, as Hulberg was lapped twice in his eight-lap heat race.

Brad King and Caden Appelt battled for the lead in the main feature. The field was reset when Vance Tomlinson got some air time on the backstretch avoiding a crash, and then again when Thomas Goldsberry went around with seven laps left.

Andrew Bertsch entered the mix for the win with five laps left.

But King held off both Appelt and Bertsch for his first win at Nodak Speedway this season. He celebrated accordingly by running around with a checkered flag and standing on the roof of his car.

Hulberg finished the race two laps down in 14th place out of 21 cars. He continued to get faster throughout the evening and brought Beeter’s car back to the garage in one piece.

Travis Hagen was gunning for his fourth straight win after visiting victory lane last week at Nodak Speedway and winning twice earlier in the week at his home track in Williston.

He pulled away for a dominating heat win. Hagen started third in the main feature and was in the lead after four laps.

No one else could keep up. But a spin by Chris Seekings brought a caution out with 16 laps to bring the field back to Hagen.

Hagen drove away again with an intense fight for second place happening behind him. In a moment of deja vu, Seeking went around right in front of the leaders to reset the field again.

Jason Wolla got the jump out the restart and was side-by-side with Hagen with nine laps remaining. Wolla finally completed the outside pass with seven laps left.

Hagan fought back and they raced side-by-side for the final laps.

Wolla had enough to fend Hagen off on the line. Robert Hellebust took third place.

Jon Lizotte was shown a black flag for “questionable driving” a lap into the first heat for the IMCA Sport Mods. The next lap, a three-car crash collected Kelly Henderson, Darren Schatz and Devin Seney.

In the feature race, Heat 2 winner Robby Rosselli reeled back leader Cole Hanshew and took the lead with 13 laps left when Hanshew drove off the track on the backstretch.

Hanshew couldn’t recover from the loss of momentum and had to settle for second place behind Rosselli. It was Rosselli’s second win this season at Nodak Speedway.

Logan Schmitz rode away from Chad Strachen for third place.

The closest finish to a heat race on Sunday went to Joren Boyce, nipping Bob Fuegmann by the nose of his car.

The same pairing found themselves at the front of the 20-lap feature race with Dalton and Joe Flory right behind them.

Mike Hagen’s stock car blew up with 11 laps left for the only caution of the race. That provided the restart Joe Flory needed to move into the lead ahead of Fuegmann. Boyce also made the pass for second.

That’s how they finished: Joe Flory, Boyce and Fuegmann. Dalton Flory pulled off the track and didn’t finish the race.

The cars return to the track on Saturday, July 4, for an Independence Day Special race program. The IMCA Modifieds and IMCA Stock Cars are scheduled to have the weekend off. The IMCA Sport Compacts will return to Nodak Speedway after not racing for three weeks.