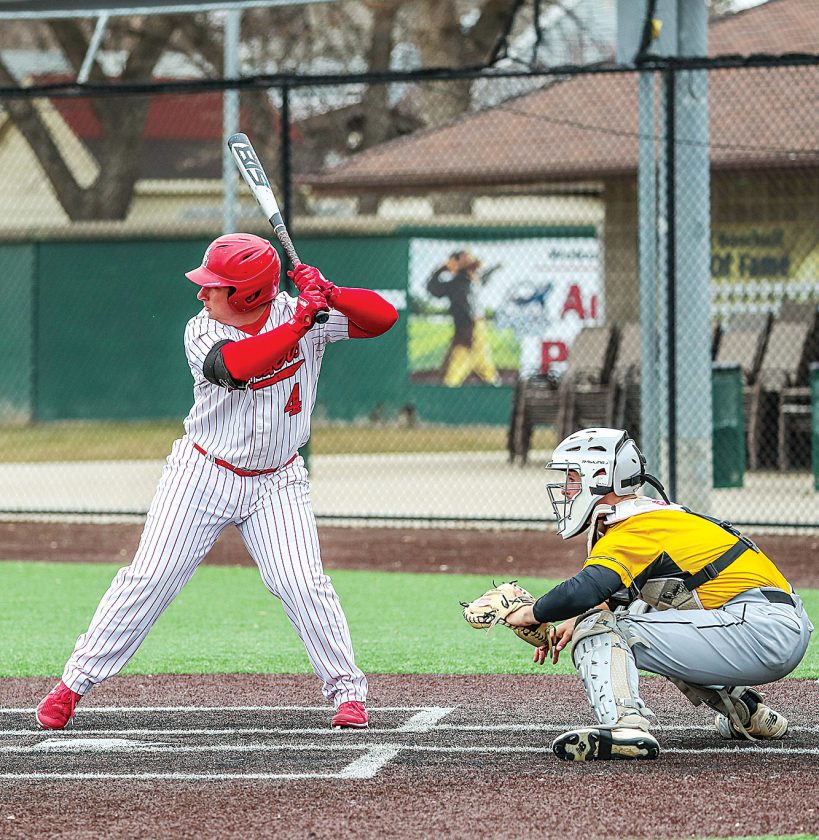 After playing two years of college baseball, Mason Gifford pressed the pause button on his athletic career. Gifford lost love for the sport, so he decided to rekindle an old flame — his passion for firefighting.

Growing up, Gifford witnessed family members perform their duties as firefighters and police officers. He drew his attention to firefighting during elementary school.

As he reflected on those mercurial seasons at Allen County Community College, Gifford yearned for a change.

“I decided that it was time for me to start my life,” he said.

His decision marked a drastic change. Throughout his early years, Gifford enjoyed participating in football, wrestling and track.

However, Gifford remained partial to the baseball diamond. He started at the T-ball level as a 6-year-old and played third base until seventh grade.

While holding down the hot corner, an unfortunate circumstance caused Gifford to rethink his primary position.

“The baseball took a bad hop and hit me in the head,” he said with a chuckle. “I couldn’t field a ground ball after that.”

Gifford refocused his efforts and started refining his skills as a catcher. As he caught games in high school, his excitement for college baseball grew.

He stayed in the eastern half of his home state of Kansas, as Allen County’s Iola campus is located less than two hours from his hometown of Topeka. Hitting from the left side of the plate, Gifford remained eager to provide early contributions.

After playing just 16 games during his freshman season, he recorded a .331 batting average (45-for-136) and hit seven home runs during his sophomore campaign.

Upon leaving the college, Gifford felt unhappy. In his words, he was “fed up” with the sport.

“I was completely okay with never playing baseball ever again,” Gifford said.

While he searched for firefighting jobs, Gifford mowed lawns with his father in the mornings and worked the night shift at a local Menards. In his spare time, he watched the Kansas City Royals play on television.

Two firefighter job offers arose — one in Alabama, another in Florida. As Gifford weighed his options, he received another phone call.

Former MSU assistant coach Riley Price wanted him to catch for the Beavers.

“My love for the game prevailed,” Gifford said.

Gifford joined the Beavers for the 2019 season and made an immediate impact with his bat. MSU head coach Scott Eul took note of Gifford’s resilience on the diamond.

“He was exactly what we were looking for in his first year here,” Eul said. “We didn’t really have that pure left-handed hitter that could hit for some thump and hit for some average. He came in and solidified that middle part of our lineup.”

He smacked six doubles, legged out one triple and mashed four home runs in 45 games.

“It didn’t matter what the pitcher had,” Eul said. “He would just hit.”

Although his hitting impressed Eul, it became a singular piece of the entire puzzle. Gifford’s sharp eye for the ball helped him draw 21 walks, raising his on-base percentage to .455.

“He was a fun dude to have around,” Eul said. “He was just a pure hitter.”

That season, Gifford played with a newfound enthusiasm. The Beavers did not boast many left-handed sticks, so he provided a boost in that regard.

“I’m definitely glad to have gotten a second chance at baseball,” Gifford said.

During his time in junior college, Gifford was often asked to pinch-hit. When the situation called for his services, Eul felt confident in Gifford’s ability to earn a base knock.

“Pinch-hitting is super-hard to do,” Eul said. “It’s not something that everybody can do. It’s a skill, and he was extremely good at it.”

Gifford batted from the No. 2 to No. 6 spots in the Beavers’ order. He showed his flexibility as a designated hitter or a pinch-hitter.

As Eul reflected on Gifford’s career, he came to a conclusion.

“He might have been the most clutch pinch-hitter we’ve had at Minot State,” he said. “It didn’t matter what the situation was. We’re up one, down one, tied — you put him in and you knew he was going to give you a competitive at-bat. You knew it was going to work out for the best for us more times than not.”

The catcher also proved his mettle behind the dish. Gifford finished the campaign with just two errors and a .993 fielding percentage.

“It wasn’t the prettiest catching job you’ll ever see, but it got the job done,” Eul said. “Guys liked throwing to him. He worked hard back there. He wasn’t going to win any Gold Gloves behind the plate, but you knew he was going to work hard.”

After taking care of his defensive business, Gifford enjoyed taking his hacks. In the process, he made an impression on his head coach.

“I think that focus to be locked in when you’re needed is huge,” Eul said.

With a clear mind, Gifford doused his worries. When he came in cold off the bench, he remained confident.

“What made it really fun for me was attempting to try and find peace in that situation,” he said.

Gifford’s time away from baseball helped him gain valuable perspective. Although he thought he would begin his first firefighting job in the South, he found comfort in the rolling prairies of North Dakota.

“Going to Minot State was an opportunity for me to continue to better myself and be surrounded by great people and great professors,” Gifford said. “The entire atmosphere of Minot State has been accepting. It’s been everything that I was looking for it to be.”

The COVID-19 pandemic halted his final baseball season, but Gifford will graduate later this month with a degree in general education. He took an interest in wildlife classes and studied zoology, botany and meteorology.

Gifford looks forward to spending time with his family while he searches for firefighting positions. When he speaks, he maintains a tone of gratitude.

“For me to be a Beaver, it kind of symbolizes that my time wasn’t done yet,” he said.

Although he spent just two years at MSU, he expresses fondness for the university.

“What I’ll be leaving behind at Minot State is a bunch of great friends,” he said. “I’ll definitely have a lot of memories to cherish and carry on for the rest of my life.”

After enduring a topsy-turvy college experience, Gifford is at peace with his choices.