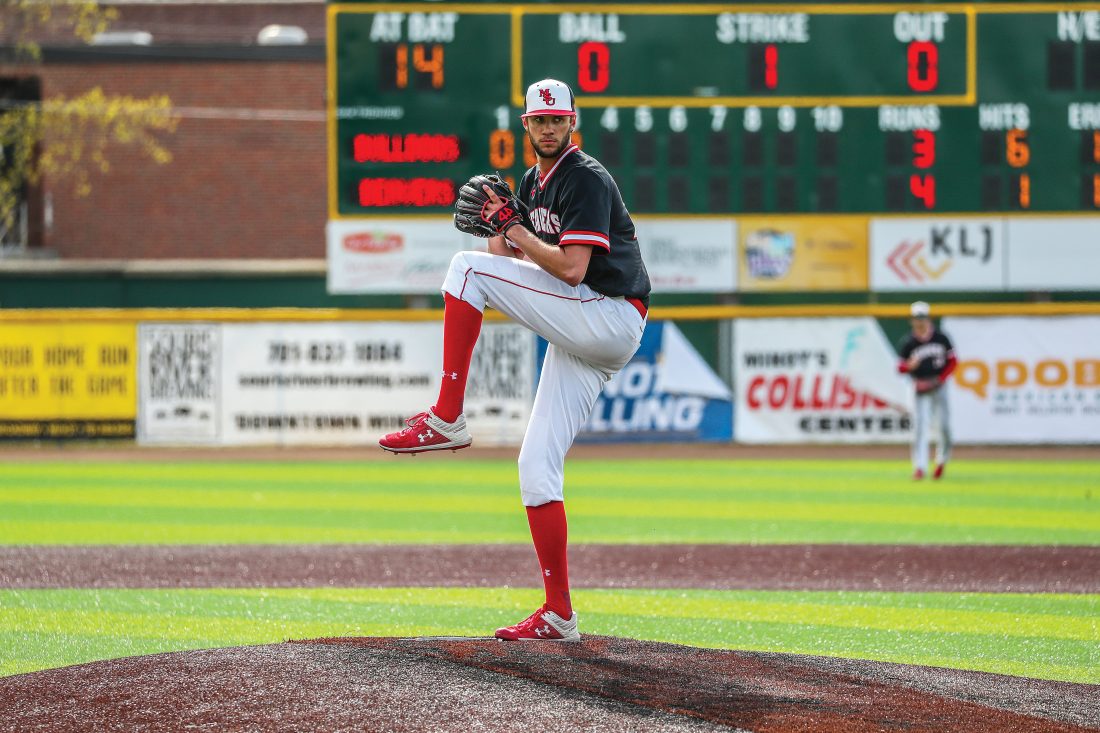 One year into his college career, Curtis Stahlecker needed to pick his favorite sport. Throughout his life, baseball and basketball alternated as his most cherished activities.

Although Bismarck State College originally recruited Stahlecker to play basketball, he played both sports during his freshman year. He weighed his options after enduring nine months of grueling practices, open gyms and games.

“My body just couldn’t handle that,” Stahlecker said. “I had to decide what my favorite was. I stuck with baseball, and I believe I made the right choice. I enjoyed the sport a lot more.”

Stahlecker enjoyed a successful sophomore campaign on the diamond. Embracing his role as a utility player, he posted a .339 batting average (41-for-121), drove in 13 runs and scored 29.

He played in seven games during his freshman season, but racked up 43 appearances during his sophomore year. In addition to providing positive contributions at the plate, Stahlecker posted a 3-2 record in 41 innings on the mound.

The coach and player came to an agreement — Stahlecker would redshirt his first year as a Beaver and bulk up.

“He was pretty fired up about redshirting for a year and developing,” Eul said.

“I was like, ‘Okay, I can actually do something with myself here,'” Stahlecker said. “‘I can build myself up.'”

Donning the red and black signaled another change for Stahlecker. He displayed his hitting prowess during his final year at BSC, but he strictly focused on pitching at MSU.

His affable nature and diligent work ethic made for a solid combination.

“He’s a really friendly kid who wanted to be good at what he was doing,” Eul said. “Guys liked him. He got along with a bunch of dudes on the team. He was extremely relatable and had a plan of what he wanted to do.”

A strict dietary regimen included roughly 3,400 calories per day. Stahlecker weighed 180 pounds after arriving on campus, so he made an effort to gain both weight and strength.

He woke up at 6:40 a.m. for weight training and stretched before 7 a.m. After weights, he began his meals with hearty breakfasts.

Stahlecker scrambled six to eight eggs and added several pieces of sausage before wrapping his concoction into a tortilla. He garnished his go-to meal with cheese, sour cream and salsa for flavor.

Some mornings, pieces of toast with peanut butter served as sufficient substitutes.

“Since I had a caloric intake that was above normal, there was no deficit at all, Stahlecker said. “I felt energized. I felt fuller. Honestly, I felt better than before.”

Lunch consisted of bratwursts and a quarter pound of pasta with alfredo sauce. Steak was a valuable commodity, but Stahlecker always ate protein-packed beef and chicken for dinner.

“I could definitely feel a difference,” Stahlecker said. “There were days where I felt stronger. I felt like I could do more.”

Those nutrition habits bolstered Stahlecker’s confidence and stamina. Standing at 6 feet, 8 inches, he wanted to use his height to his advantage on the hill.

Throughout his time at MSU, Stahlecker studied the motions of two former MLB standout pitchers: Randy Johnson and Tim Lincecum. Each pitcher used his body to gain an edge, and Stahlecker saw an opportunity to follow suit.

He observed Lincecum’s ability to gain power through the lower half of his frame. Studying the two-time Cy Young Award winner helped Stahlecker realize a critical facet of pitching.

“I just thought you come through, stride with your legs and then use your arm,” he said. “In reality, you actually have to use your lower half. If you create better timing with your lower half and proper mechanics, it puts less stress on your arm. That’s one of the things that I felt helped me a lot.”

Eul took note of Stahlecker’s dedication to his craft.

“He worked really hard that first year,” Eul said. “Everything he got, he earned. It was fun to watch. You could tell that he was making improvements.”

After making those strides during his redshirt year, Stahlecker joined the Expedition League’s Casper Horseheads for the 2018 summer season. His first few appearances went well, but Stahlecker’s shoulder started to nag him.

He discovered a partial tear in his rotator cuff. A first rib manipulation procedure caused Stahlecker to miss the remainder of the summer.

The Beavers began their 2019 season on the road, and Stahlecker returned to the bump. While pitching in Arizona, he felt his velocity dip in the second inning of a game.

“I didn’t think too much of it,” Stahlecker said. “The adrenaline of the game kind of suppresses those feelings of pain.”

Stahlecker started the outing at about 89 miles per hour, but gradually dropped to 78. The subsequent months featured multiple visits to MSU’s training room, where Stahlecker received massages and loosened his muscles.

In May 2019, the unfortunate news broke. Stahlecker’s MRI revealed a sprained ulnar collateral ligament (UCL) in his elbow.

He took the summer off to heal and rehabilitate. As crisp fall winds swirled throughout Minot, Stahlecker posted promising performances in practice.

As the Beavers prepared for an early-season road trip, the COVID-19 pandemic canceled all Division II competitions. The news upset Stahlecker, but his time away from the diamond helped him gain a newfound appreciation for the game.

“He pushed me a lot harder than I was used to,” Stahlecker said. “I wasn’t really pushed a lot in high school to get better. That’s one of the things that I’m most grateful for. He pushed me to be so much better than I was. I thanked him for it, but maybe not enough.”

Stahlecker will not return to the Beavers for another season, but he still has some unfinished business at Corbett Field. This summer, he will play for the Souris Valley Sabre Dogs.

The Expedition League’s season is currently postponed due to the pandemic, but Stahlecker is itching to get back on the mound.

“That’s my driving force right now,” he said. “There’s still some baseball left to be played.”

Earlier this month, Stahlecker graduated from MSU after majoring in criminal justice. His minors included policing and community corrections, and he wants to pursue a job as a juvenile correctional officer.

As he looks back on Stahlecker’s journey, Eul sees a positive example for future Beavers to follow.

“He showed that it’s possible to come in from a junior college and make huge jumps,” he said. “He came in and really wanted to get better early on. He did.”

After playing baseball for 17 years, Stahlecker is coming to grips with his current situation. His final summer baseball season is up in the air, but he does not regret trading his sneakers for cleats.

“I always think of the good memories that came with it and all the good times spent on the road,” he said. “I wouldn’t have the friends that I do without baseball.”