A conversation with Jordan Willert 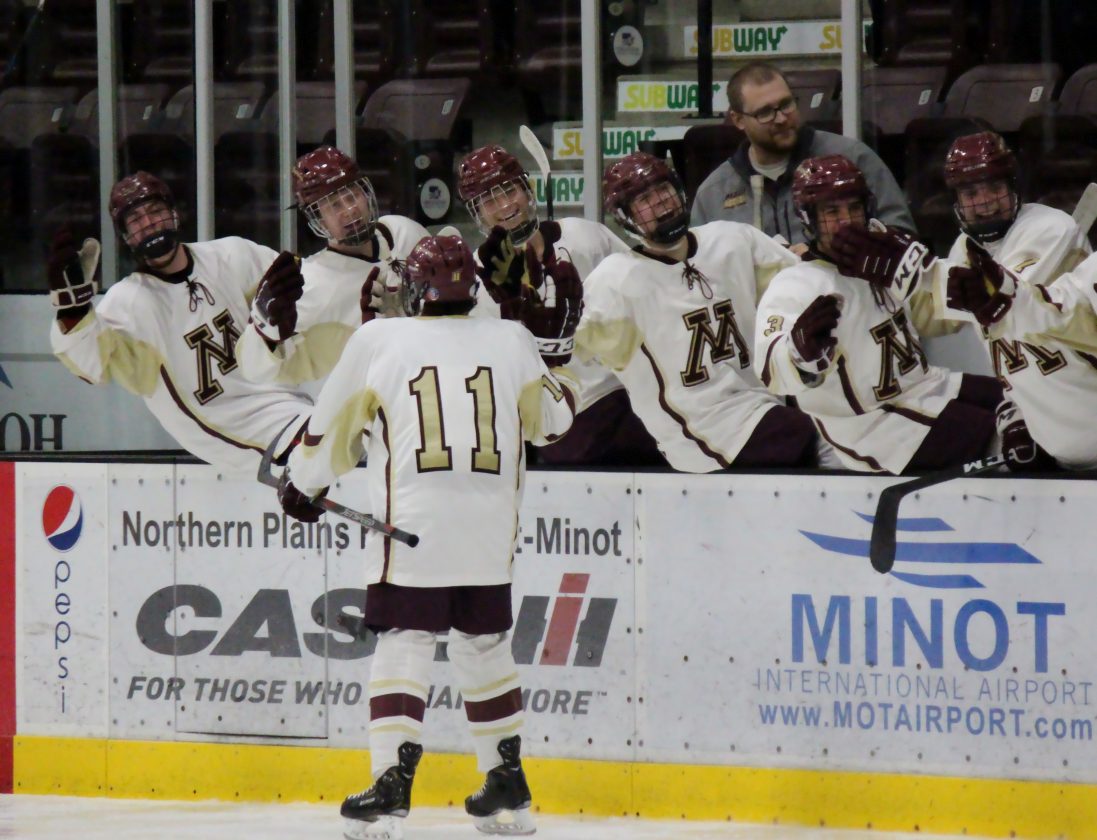 Alex Eisen/MDN Minot High boys hockey assistant coach Jordan Willert stands behind the bench while the Magicians celebrate a goal scored in a game played this past season at Maysa Arena in Minot.

Jordan Willert is a teacher at the Central Campus High School in Minot and an assistant coach for the Minot High School boys hockey team.

Growing up, Willert moved from Minot to Nebraska to play junior hockey with the Tri-City Storm and then went on to play collegiately at the University of Nebraska-Omaha for three seasons. He moved back home to Minot and finished his playing career with an ACHA national title in 2013 with the Minot State Beavers.

The Minot Daily News chatted with Willert recently about his role as an assistant coach, as well as being a teacher, and the memories of his playing days. Some responses are edited for brevity and clarity.

MDN: How are you spending your time these days?

JW: I’m just trying to keep up with my 3-year-old. We are just finishing up school — done next week — and it’s been kind of grind doing that. The kids have been outstanding, though. They have worked extremely hard.

Also, I’ve been keeping up with our athletes. In the last couple of weeks, most of them have started lifting again. The rink is back open to a certain extent, so some of them have been getting back on the ice. That’s been good to see.

But, in this time of a global pandemic, having relationships and being able to talk to people, especially high school-aged kids, and make sure everybody is doing OK is the important thing.

I know other teachers and people that I coach with have been doing that also.

MDN: How would you describe your coaching style?

JW: Being an assistant coach, I have to be different than the other two coaches. In my experience, the head coaches are more authoritative. They tend to get on the kids a little bit more. It’s not like they are being negative; they are holding kids accountable.

As an assistant coach, you have to be that person who the kids fall back on. They can come to you almost like a pick-me-up type of thing.

Eventually, one day, I’d like to be a head coach. Then, I think that probably changes. But I think you have to have that balance.

All three of us (coaches) have an extreme amount of care for Minot High sports, especially Minot High hockey. We all grew up around it. I think that shows in how we carry ourselves and the program.

MDN: Along the same lines, what’s the key to keeping morale high in a locker room?

JW: I talk about abilities. It’s like, ‘Hey bud, we wouldn’t be getting on you, or we wouldn’t be asking you to do something that we didn’t think you could do.’

If a kid is repeatedly making a mistake or is struggling with something, we work on it. Then, once they do it, now I can tell them, ‘Hey man, we have seen you do it.’

Part of it for us with the teams we have had the past few years at Minot High is it’s a lot of good kids in the program. The kids are keeping the morale up themselves. They understand that if we are getting on them, it’s not because we don’t like them, or are angry at them. It’s that we expect them to work hard and do the right thing. If they don’t, then we are going to coach them.

That’s what we are there for, to motivate and correct mistakes.

MDN: What do you think is the most common mistake hockey players make?

JW: Oh, boy. I think this is a lot of times in sports in general or just in life, but (the thought) that, ‘I can always do it next time.’

So, go out there every night and work hard. Some nights you aren’t going to have it and not every night is it going to be perfect or great. But the one thing that you can control is how hard you work. People notice that.

MDN: If you could change anything about your playing career, would you?

JW: Oh, man. You’re going deep with that one. Ah, probably not.

I mean, you can look back at how things turned out. I go to Kearney, Nebraska, as a junior in high school and played three years of junior hockey. I loved every minute of it.

I accepted a scholarship to go to Omaha. Things were great. A coaching change over, and I moved back here to Minot, where I won a national championship with the Beavers.

The only thing that I probably semi-regret is maybe leaving my junior year (in high school) and not staying for my senior year because I missed out on so many of those big milestones with my friends. Not like I am a big prom or homecoming kind of guy, but I did miss out on that stuff with my friends. And here I sit now, and I’m not playing pro hockey.

Do you know what I mean? If I get done with all of that stuff and end up playing pro hockey, then I would probably have a different answer. But I don’t regret it at all.

I just wish kids would stay and realize that high school hockey in North Dakota is perfectly fine for at least a year. Look back at some of the greats that came out of here like Mason Morelli and Colby Enns, or down in Bismarck with Alec Rauhauser and Jared Spooner. They all played some high school hockey.

MDN: What is your most memorable hockey moment?

JW: Coaching there is kind of two of them that ties into the same season. We ended up beating Bismarck Century down in Bismarck in the (2017) WDA semifinals in triple overtime. Then, a week later, we beat Fargo Davies in the first round of the state tournament.

My dad was a Minot High hockey coach, and they won (the state title) in 1992 but didn’t win any other first-round games. I was on arguably one of the best teams in Minot High history, and we lost in the first round when we were undefeated. I had never been a part of a first-round win.

So, it was a big deal. I kept the newspaper clipping. My kid was also born that year and I will show (the newspaper) to my kid someday, so it can hopefully be motivation for him.