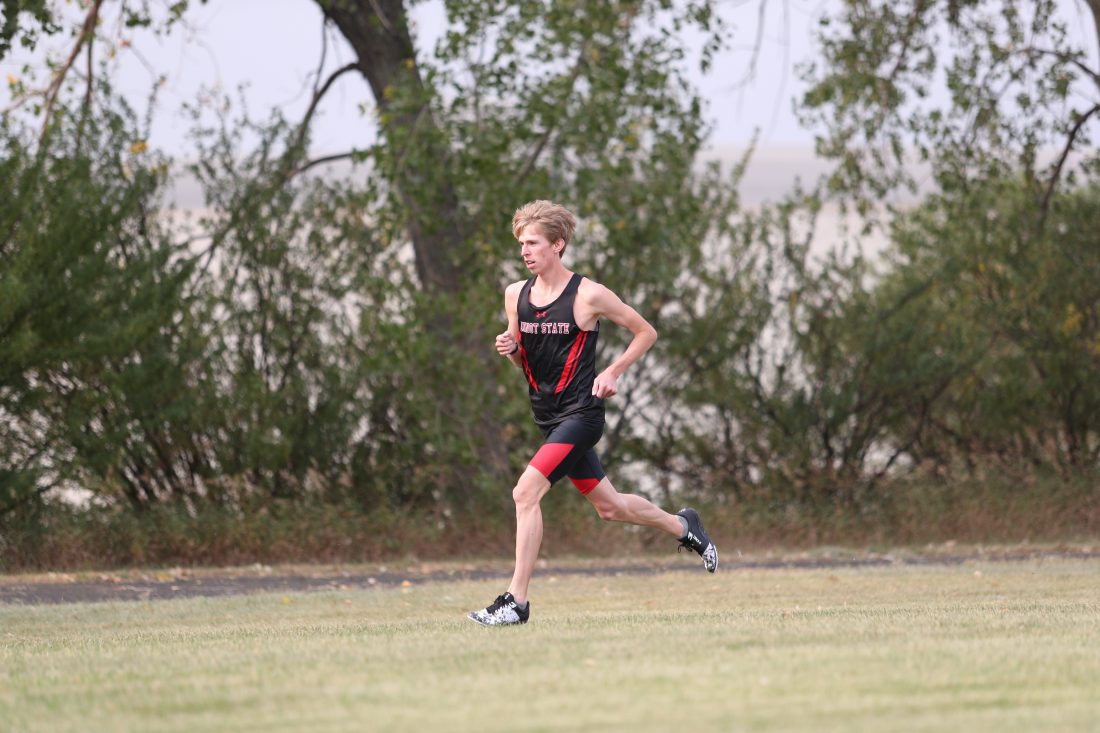 Over the duration of an arduous running career, Devan Shumway has deflected acclaim and credited the people around him.

Earlier this month, life came full circle for the Minot State fifth-year senior. When the NCAA canceled all winter and spring sports championships due to COVID-19, Shumway found himself on the receiving end of overwhelming support from cross country and track friends alike.

“Immediately, I had 10 different people text me,” Shumway said. “All former teammates, whether they were from high school or college. They said, ‘How are you feeling? What’s going on? What’s going through your head? What’s happening?’ It was all sorts of things that they were asking me. They knew how much I wanted to do well during this last year of outdoor (track). They said, ‘No matter what happens, know that a lot of us love you.’ I had more than one person say that to me. ‘A lot of us love you, and we can’t imagine what you’re going through. Just know that you have people behind you.'”

Shumway has entered a transitional period. After contributing to the MSU men’s cross country and track and field teams since 2015, he will graduate with a degree in broadcasting and professional communication in May and put his collegiate running career behind him.

Although the present remains a bit uncertain, the values he will leave behind are quite clear. For two teams filled with youth, the example Shumway set is indispensable.

In that sense, Shumway’s journey showcases some irony.

Before his freshman year of high school, he was unsure of how passionate he was about running. In the midst of his high school senior campaign, Shumway did not know if he wanted to pursue a college career.

Shumway hails from Helena, Montana. After his eighth-grade year, his family relocated to Williston.

While running track for the Williston High School Coyotes, Shumway met Joshua Drew. After Drew committed to Minot State for track, the wheels in Shumway’s head began to turn.

“I was like, ‘Oh, that’s pretty cool,'” Shumway said. “‘Josh is good. Minot is close to home, and he gets to compete at the collegiate level.’ It was something that I really hadn’t thought about.”

According to Shumway, his senior year presented several unknowns. When Drew reached out, the pieces fell into place.

“He said, ‘Running at Minot (State) is a lot of fun and you should look into it,'” Shumway said. “That kind of sparked the idea. Minot was close to home and I would still get to run. I would maybe be on a scholarship, which would be pretty nice. (Drew) is the main reason that I am in Minot right now.”

Nowadays, Drew serves as an assistant coach for the MSU sprinters and jumpers. Although Shumway specializes in distance running, the former Coyotes kept their friendship alive as Beavers.

Just as Drew provided inspiration during their high school days, Shumway has left a lasting impact on the coach.

“He’s patient,” Drew said. “That’s probably the first word that comes to mind. I know that he’ll wait forever for his shot, but he will work in the meantime. I’ve known him for a long time, since he was in ninth grade. He just knows that when the opportunity comes around, he’s going to be ready. He knows that his hard work is going to pay off.”

Drew recalls a quiet Shumway adjusting to a new environment in Williston. Those years of listening and observing have paid dividends.

“He was still an awesome kid, but he was so, so shy,” Drew said. “It’s been a pleasure and it’s been fun to watch him grow. He is an awesome young man. He’s going to kick butt at wherever he goes after Minot State. As far as the track program goes, I think he’s going to be remembered as one of the pillars.”

The setbacks provided a path of persistence, but Shumway needed to develop his own positive habits. During his freshman year at MSU, Shumway often skipped breakfast because of early classes.

During this past indoor season, the Beavers practiced at 7 a.m. Shumway consistently woke up at 5:45 a.m. before driving to the MSU Dome.

He spent nearly 30 minutes warming up each day. Lunges, leg swings and hip mobility exercises were staples in his regimen.

“I just needed to do all that to wake my body up and get the blood flowing,” Shumway said. “I definitely learned the importance of taking care of my body and preparing it for practice.”

In addition to reworking his morning routine, sleep became a priority. Gone are the days of neglecting breakfast — Shumway now enjoys scrambled eggs with spinach, toast or bagels with peanut butter and an avocado on the side.

The MSU programs have vastly improved in recent years, but the beginning of Del Monaco’s tenure did not come without challenges.

“Any time a new coach shows up, I think it’s a little hard to rally the troops and get kids to buy into what your vision is for the program,” Del Monaco said. “He was one of those guys that, from the get-go, was bought in and listened to everything. He did everything I was asking of him. Because of that, he was a really good leader for us as we moved forward.”

The Achilles injuries prevented him from earning more awards. Shumway said four of the five flare-ups happened in college.

“He doesn’t have a lot of school records or accolades,” Del Monaco said. “He was never All-Conference or anything like that. The guys we have now, we have a really young group. It’s a bunch of freshmen that we brought in this year. I think they will remember him for his leadership. He’s a prime example of being bought into what we’re doing.”

Although Shumway is quick to credit Drew and Del Monaco for their assistance, Del Monaco lauded his proactive attitude during those tough times.

“It’s a major testament to him and his mentality,” Del Monaco said. “I can’t say I can take all the credit for him. It’s probably 80% him and 20% me. He was very motivated to always want to come back healthy.”

During his year-round running seasons, Shumway developed passions for photography and videography. Over the last two years, he has worked at KMOT-TV as a commercial production assistant.

He assists in filming local commercials and editing the final products.

“It’s been kind of a nice balance,” Shumway said. “I’ll go to practice and I have running. On the outside of that, I also have work. I get to go to a job that I actually enjoy. It’s been a pretty nice balance that I have figured out. I look forward to taking all that experience somewhere.”

Honing his craft through his job has helped Shumway in the classroom. His broadcasting major consists of several projects, and the field work is a boon.

He prefers life behind the camera, and his creativity has provided a platform to share his work with others across North Dakota.

“I’m proud of what I have accomplished as an athlete and what I’ve accomplished as a student,” Shumway said. “The experience that I’ve gained in a professional setting is going to be really helpful while moving on to the next gigantic chapter of my life.”