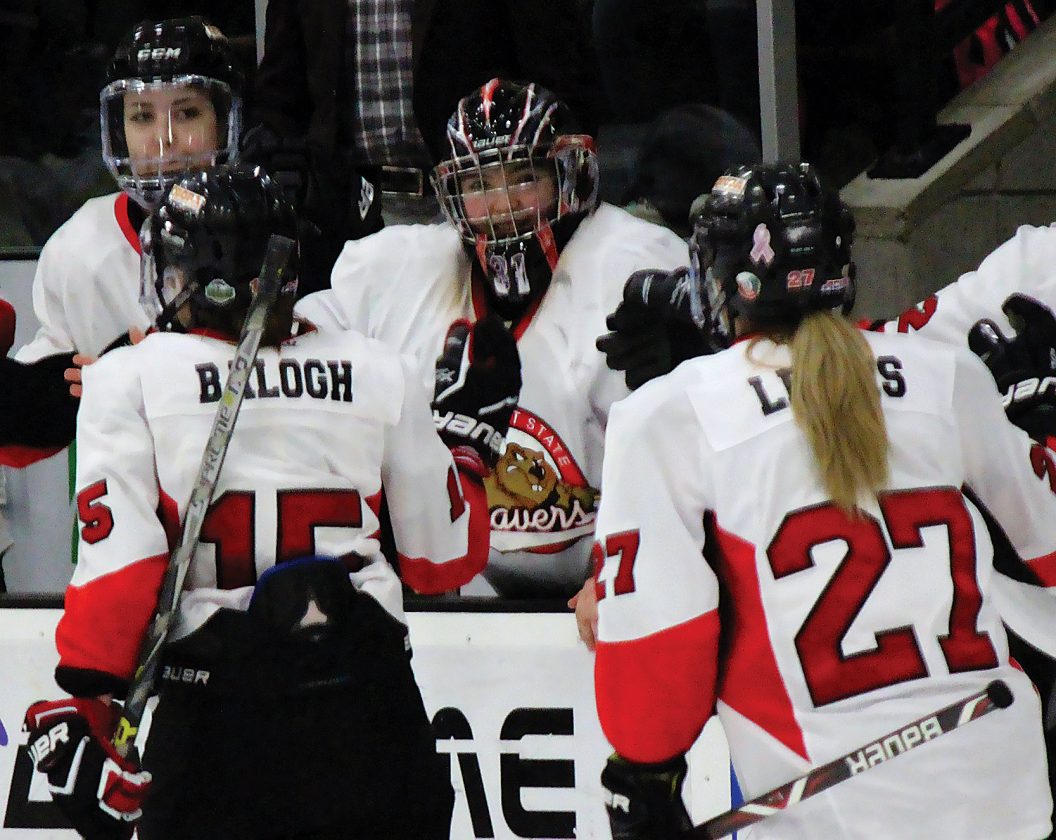 Before the COVID-19 pandemic canceled the 2020 ACHA National Tournament, Shelby Tornato had already come to terms that she had probably played in her last game with the Minot State women’s hockey team.

After being the starting goaltender in back-to-back ACHA Division II national championship games, Tornato often found herself cheering from the bench in her senior season as freshman sensation Jordan Ivanco took over between the pipes.

Drawing the short straw was met with conflicting emotions.

“I’m not going to lie, it wasn’t easy,” Tornato said. “But, I was there for the girls on the team. I’ve been with these girls over the last four years. I’m so excited about where this team is going, and the respect we were getting around campus. If that means me sitting on the bench, I’m still honored that I could be there for them. Obviously, it would have been nice to be in those games as well, but whatever the coaches think is best for the team and whatever helped our team be successful, which we were. We were second in the nation.”

The Beavers wouldn’t have reached this point without Tornato, the relegated goalie who helped put the MSU women’s hockey program on the map.

Growing up in Saskatoon, Saskatchewan, Tornato was an outlier. The Canadian youngster had no interest in playing hockey as a kid.

“My brother was the hockey player in the family,” Tornato explained. “I was absolutely repelled from hockey. With my brother playing it, and I wanted to be completely different from him. I didn’t want to be like my brother at all.”

Instead, Tornato followed in her mother’s skates and fell in love with another game played on a sheet of ice: Ringette.

While both sports share a lot of similarities, the differences are noticeably game-changing. For starters, instead of a puck, it’s a blue rubber pneumatic ring. Also, all players, except for goalies, use a straight stick ending in a rigid plastic tip.

The most significant difference, as well as an advantage for Tornato was being the only player allowed to occupy the crease.

“The ring isn’t live in the crease,” Tornato said. “In hockey, girls could be in my crease while in ringette it’s very much the goalie’s zone. So, I was terrified to have people come near me. And, because it’s a stick and a ring, it’s a lot easier to get underneath it. So the shooting aspect was a little different. But, as a goalie, that was about the only differences.”

Convinced by her father, Tornato made the jump to hockey for the first time at 13 years old. She joined the league late and was placed on a club team. A couple of weeks later, Tornato was called up to the AA team.

“They were desperate and needed a goalie,” Tornato said. “Nobody else wanted to play goalie. So, I said, ‘Sure.’ I had never played competitive hockey before, and now I was on this AA team. I fell in love with it the second I got there, and I have never looked back.”

After playing with the Battlefords Sharks in the Saskatchewan Midget AAA Hockey League (SFMAAAHL) for a couple of seasons, Tornato thought her hockey days were coming to an end. While fellow teammates and friends were getting recruited to play at prominent colleges, she wasn’t.

Minot State wasn’t even on her radar until a guidance counselor pointed her in the right direction.

“I made the decision that I wanted to be a speech pathologist,” Tornato said. “And (my guidance counselor) said, ‘OK, you have to go to Minot State for that.’ I looked at her and said, ‘Where the heck is that?’ I had never heard of Minot in my entire life.”

The uncertainty of the unknown was quelled a little bit when Tornato found out MSU also had a women’s hockey program.

“I was starting to hit that realization that I had to pick one or the other: my education or my hockey,” Tornato said. “Then, here came this school where I didn’t have to pick. It was the best thing I could have ever wished for.”

From nothing to something

When Tornato arrived at Minot State, the Beavers women’s hockey program was more recreational than they were competitive. But this tight-knit group had their sights set on achieving more.

“On paper, we didn’t have the strongest team,” Tornato said. “We barely had a team. There was like no one here. But, because we were so close as a friend group, we communicated and used the talent we did have to the best of our abilities. We were never afraid of hard work. Bigger teams hated playing against us because we would never quit.”

MSU reached the ACHA Division II National Tournament for the first time with freshman Tornato guarding the crease. The unlikely underdogs lost in the national semifinals to in-state rival North Dakota State, 4-3, on a game-winning goal with 2:22 remaining.

Fast forward a year, and the two teams squared off again in the national semifinals. The Beavers got their revenge with a 3-1 win, featuring two third-period goals and an 18-save showing from Tornato.

A memorable moment that Tornato will never forget.

“The buzzer had just gone, and we knew we had won,” Tornato said. “Mackenzie (Balogh), my roommate, was the first one to come down the ice. We wrapped into one of the biggest hugs. We screamed and cried together because we were so excited that we had got our team to the national championship game for the first time.”

That euphoria, however, was squashed a day later when Lakehead topped the Beavers 5-1 to win the national title.

MSU experienced deja vu the next season with a 1-0 championship defeat against Assiniboine Community College. Tornato made 13 saves, but the Beavers’ offense went missing due to tired legs mostly. The Beavers were playing their fifth game in five days.

“Those two losses had nothing to do with her,” MSU head coach Ryan Miner said. “She always gave us an opportunity to win. She played in some big games, and we couldn’t ask for anything more. There were a lot of times where she bailed us out.”

In correlation to Minot State’s newfound success and moving up to the ACHA Division I level, more recruits were brought in. Tornato became the experienced veteran alongside freshman goalies Ivanco and Lexi Beuker.

Ivanco, who was named to the All-Athletic First Team at the end of the season, quickly cemented herself as one of the best goaltenders in the league.

“First time in program history that we had three goaltenders — three very good goaltenders,” Miner said. “They competed every day and pushed each other… With three goaltenders, that was the toughest decision we had to make as a coaching staff with every game. Who was going to get that opportunity? There is obviously going to be frustrations, but she always handled it well.”

After 35 wins in 48 games played at the ACHA Division II level (2.11 goals against per game, 92.2 save percentage), Tornato made four ACHA Division I starts as a senior and posted a 2-1-1 record.

One significant game that doesn’t show up in Tornato’s stat line is a 6-1 senior day win over non-ACHA affiliate Rinkside Academy on Feb. 29. It will go down as Tornato’s last game as a Beaver.

“Looking back now — I’m getting emotional just talking about it — I’m truly honored to get that start,” she said. “My whole family was there. It was one last send-off at the Maysa and one last send-off for my senior year. To come out of it with a win is more than I could have ever asked for.”

Miner added: “She put so much into the program. She deserved and earned that start.”

Tornato has been accepted into Minot State’s graduate program for Speech-Language Pathology. She will not be pursuing her fifth-year eligibility option with the team, citing school workload.

But, Tornato will still make her presence known at Maysa Arena.

“I will be at every single home game cheering on the girls,” she said. “I don’t believe it some days that we got (this program) to where we did because it feels like a completely different team. It’s been amazing — the progress. I’m just so proud of all the girls before me, all the girls I played with and the new girls coming in. So proud of everyone. The team wouldn’t be where it is now without everyone.”