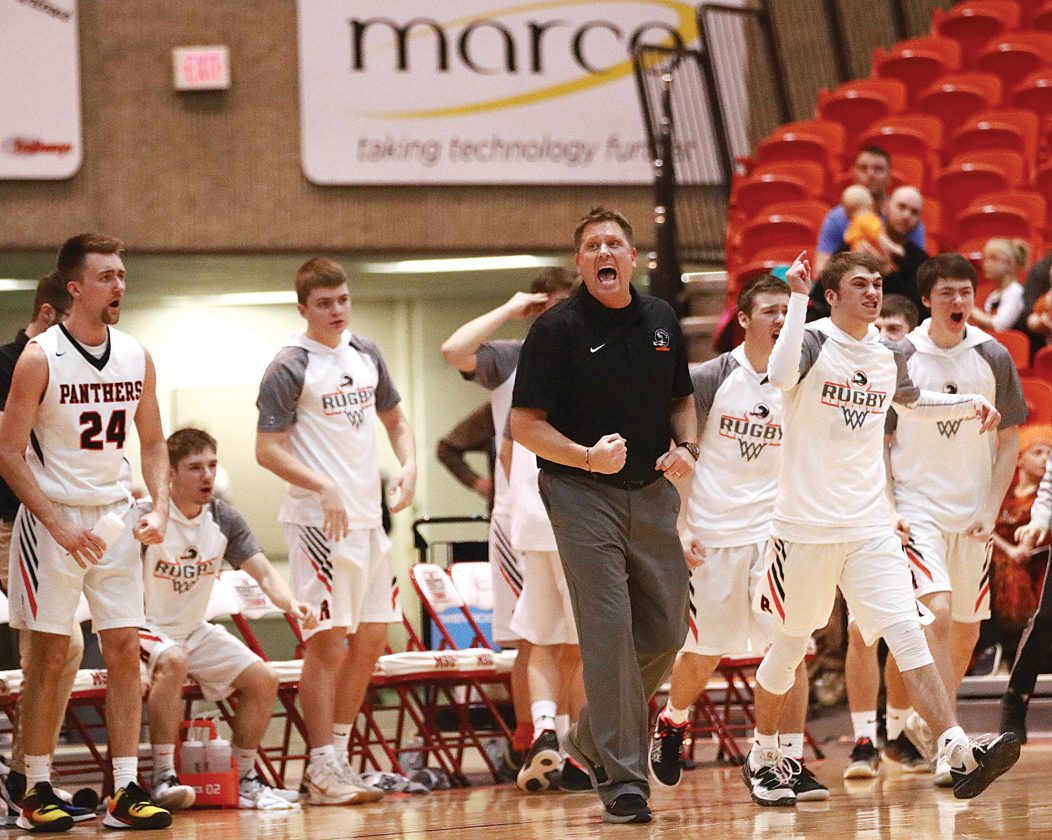 Jimmy Lafakis/MDN Rugby head coach Mike Santjer (center) and players react during the first half of the Region 6 Tournament game at the MSU Dome. The Panthers captured a 66-31 victory over Our Redeemer's.

Mike Santjer wanted to watch some high school basketball. Less than 24 hours after guiding the No. 3-ranked Rugby boys basketball team to a decisive 61-33 victory over Our Redeemer’s in the Region 6 Tournament championship game, Santjer indulged in some more postseason hoops.

While live-streaming the Class A Boys Basketball Tournament, he received the news he had feared. On March 13, the NDHSAA Board of Directors declared a suspension of all winter postseason tournaments due to the COVID-19 pandemic.

Although Santjer had discussed the possibility of a Class B Tournament suspension with Rugby athletic director Scott Grochow, the official verdict was a crushing blow.

“We had an idea that this was something that could possibly happen,” Santjer said. “It was a little bit devastating. Any time you have a team that has a chance to make the state tournament, it’s pretty special.”

The announcement froze the Panthers’ memorable campaign. Rugby amassed a 22-2 record and clinched their Class B Tournament berth in resounding fashion. 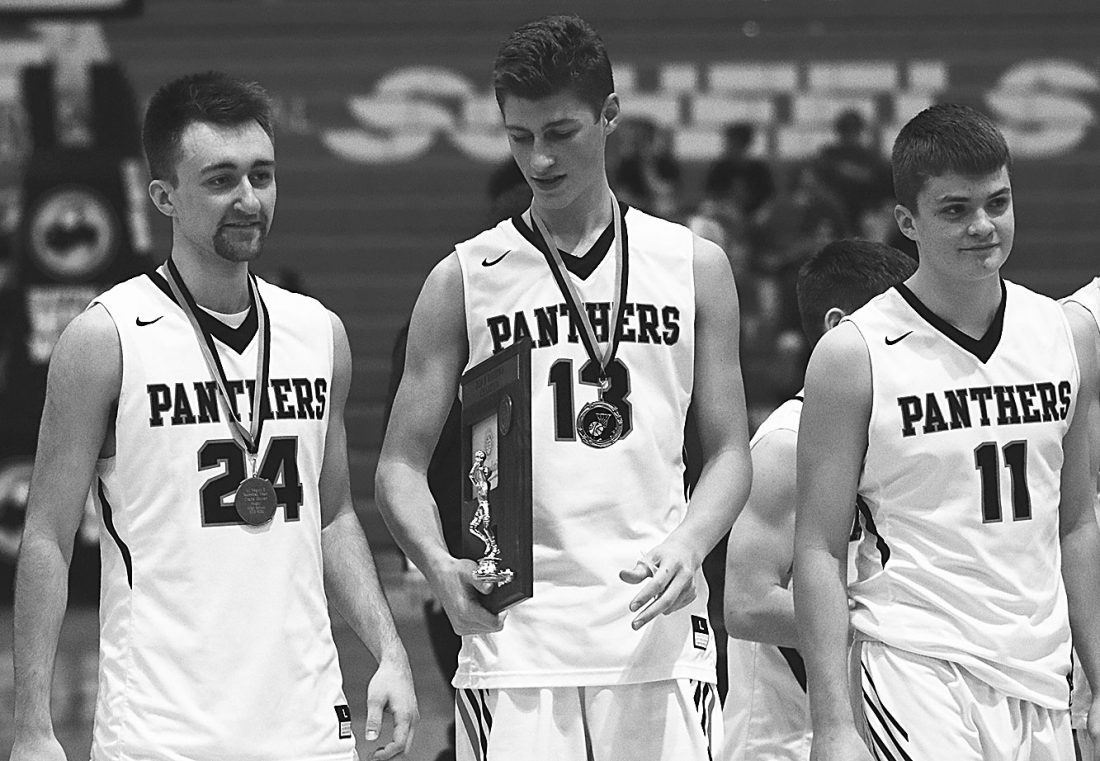 A recent seven-game winning streak buoyed the squad’s momentum. The experienced Panthers appeared to be destined for a reversal of fortune.

“With these guys last year, unfortunately we didn’t play very well in the semifinal game (against Our Redeemer’s),” Santjer said. “We weren’t able to play in the regional championship. The year before — when the (seniors) were sophomores — those guys got a taste of the regional championship game against Bishop Ryan. They actually came pretty close that year, too.”

Rugby’s offense hums like a well-oiled machine. The Panthers know their roles and execute their tasks with precision.

Leaders command every successful team, and Rugby is no different. Hamilton, Goven and Michels started their basketball journeys at the Minot Family YMCA in elementary school.

Naturally, their growth has impacted Santjer as a coach. But the player-coach relationships go deeper, as Santjer taught all three of those seniors in his sixth-grade general studies class.

“It’s gone back a long way,” he said. “They were the kids you always saw in the gym. They were always hanging out whenever there was an open gym or something. They’ve been playing a lot. It’s been a goal of theirs for quite some time to try and do something special when they got to high school and played at the varsity level.”

Throughout the season, Rugby players communicated in a Snapchat group message. As the Panthers discussed the suspension amongst each other on Friday, the chat became somber.

“It’s kind of heartbreaking, you know?” Hamilton said. “Our team has worked so hard this season to get to where we got, and so have all the other teams. We enjoy each other.”

For the foreseeable future, the Panthers won’t be able to take their post-game meal traditions to Bismarck.

“We all hope we get the chance to play,” Michels said. “You’ve just got to stay positive in times like these.”

Whenever a Rugby team hits the floor, a sea of orange and black is sure to follow. According to Michels, the Panthers were unsure how many fans would show up to the Region 6 Tournament at the MSU Dome because of COVID-19.

The Rugby faithful came out in droves.

“The community has shown great support,” Goven said. “I may be biased, but we have the best fans out there. They showed up and supported us every game. I can’t say enough good things about them.”

It is understandable why the players did not foresee a large turnout, but those fans constantly fill the seats — in Rugby or elsewhere. The passionate community showed intense support for the Rugby girls basketball team, a group who also earned a Region 6 title and a state berth.

“They have a love for basketball,” Santjer said. “No matter if it’s the girls squad or the boys squad, they always turn out.”

Community members have shown their support through phone calls and text messages to Rugby players over the last few days. In addition, young Panthers will sometimes message the players on Instagram and offer words of encouragement.

Everything comes full circle. The Panthers were once those elementary and middle school students, yearning for a chance to participate in the heralded Class B action.

“They were little kids when we went on our run in 2013, 2014, 2015,” Santjer said. “In the back of their minds, they always wanted to be part of that. They saw how special it was to those guys, so they wanted to get back to the state tournament.”

Although the future is uncertain, a few notions remain clear. If the suspension is lifted, the Panthers will be eager to step on the hardwood.

An entire community will rally around them.

“They’re just a special group,” Santjer said. “The whole team has just been a fun group. Every day at practice is a fun time, and it’s a unique group of kids.”

Jimmy Lafakis/MDN Rugby head coach Mike Santjer (center) and players react during the first half of the Region 6 Tournament game at the MSU Dome. The Panthers captured a 66-31 victory over Our Redeemer’s.