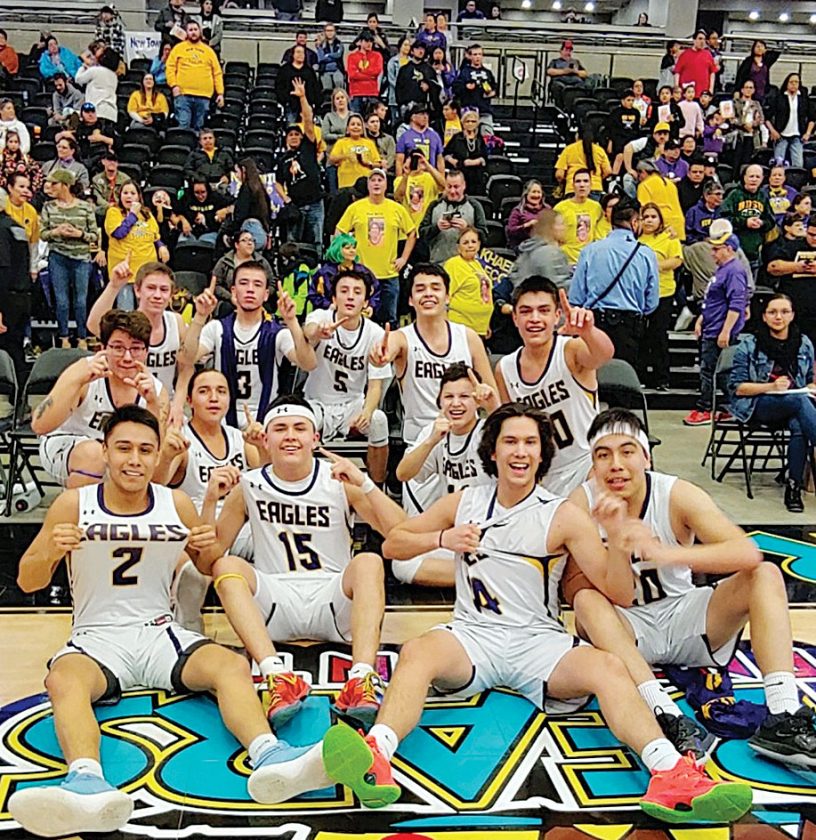 Submitted Photo The New Town boys basketball team poses for a photo after winning the Region 8 Tournament in New Town. The Eagles earned a 68-60 victory over Lewis & Clark/North Shore-Plaza in the championship game.

New Town principal John Gartner delivered the unfortunate message over the intercom. Due to the COVID-19 pandemic, the NDHSAA suspended all winter sports tournaments.

“We didn’t know for sure if this was the end, but we were all upset,” DeCoteau said. “We just gathered around and hugged each other, watery eyes and all.”

For a program that has not appeared in the Class B Boys Basketball State Tournament since 2014, the decision was especially heartbreaking.

After starting the season 3-2, the Eagles (19-5) started to soar. New Town played a competitive game against Shiloh Christian on Jan. 25, falling 54-50 to the Skyhawks.

The Eagles capped their campaign by rattling off 10 consecutive victories. First-year head coach Jay Hale led New Town to a Region 8 Tournament championship after commanding the Eagles to a 68-60 win over Lewis & Clark/North Shore-Plaza at the New Town Event Center.

When Hale looks back at the beginning of the season, he reaches one realization — everything fell into place.

“I said, ‘I can’t control what the scoreboard says, but I can control how hard we compete,'” said Hale, a 1990 New Town graduate. “I knew I had some competitors because I had a few of them in cross country and track. I knew they were competitive. If I could have them competing hard on both ends, I knew the wins, losses and the scoreboard would take care of themselves.”

The competitive drive and a staunch commitment to defense (52 PPG allowed) helped the Eagles reach new heights. As outside questions and doubt swirled, New Town hit the floor and handled business.

“You can kind of project sometimes, but with this group, I couldn’t really project,” Hale said. “I was really confident that these guys were going to compete hard. They did. They competed all the way through the end of the regional championship game.”

New Town did not receive any major preseason accolades. The Eagles did not sniff the Class B’s top 10 media rankings, either.

“Coming into the year, nobody thought we would even make it to regionals,” DeCoteau said. “We were not even ranked in the top 50. We aren’t the type of people who really care about rankings, but I think we all kind of took offense to it. I feel like it motivated us to prove everyone wrong. That’s what I like about my team — no matter what people say to us or about us, we know what we are capable of.”

The Eagles won their most recent state championship in 1980. Blondie’s “Call Me” topped the Billboard charts that year.

“As the point guard, I was the leader on the floor,” Williams said. “I had the opportunity to run the game. I knew I had to keep my boys on point and focused every day.”

Added Stewart: “Nobody thought we were going to have a winning season. Five seniors graduated last year, and some were key players. We worked hard all summer. We got in the gym, we put in the hours, we worked out and we went hard at open gyms. It all paid off. We proved everyone wrong, and the only ones that believed in us were ourselves, our coaches and our town.”

Representing the Fort Berthold Reservation, the Eagles played with pride.

After a season of silencing doubters, the NDHSAA’s decision froze the Eagles in their tracks.

“It’s a bittersweet deal,” Hale said. “For me, the coaching staff and everybody that was involved, we didn’t get the chance to let it sink in. You didn’t get that chance. You went from this high and really enjoying it. It was like, ‘Man, we’re really going to Bismarck.’ It is so hard to get to state. It really is hard, and a lot of good teams miss it. Either a bad bounce, a missed call or things like that. We didn’t get a chance to really enjoy that.”

Hale continues to check on his players regularly. He makes it a point to call the Eagles individually and ask them how they are handling the news.

“Within a day or two, we had to tell them, ‘You guys are probably not going to go now,'” Hale said. “When I got my team together and told them, it was like they had lost a family member. You want to try and reflect on your season, but you’re so stuck on this. We need closure somewhere and sometime in the near future.”

On the reservation, extended family becomes even more crucial. Hale can relate to his players’ humble beginnings.

“We’re all from North Dakota, but I come from a culture where family is really important,” Hale said. “You have kids that are living with relatives, and they take in other kids. The culture of where these kids come from and where I live, we always have full support. No matter what we’re doing.”

Although the future appears bleak, Hale and his players are holding out hope for the chance to compete.

“I hope that later in the year, we can experience what we worked so hard for,” Williams said. “It sucks, working so hard for something and it being taken away from you.” 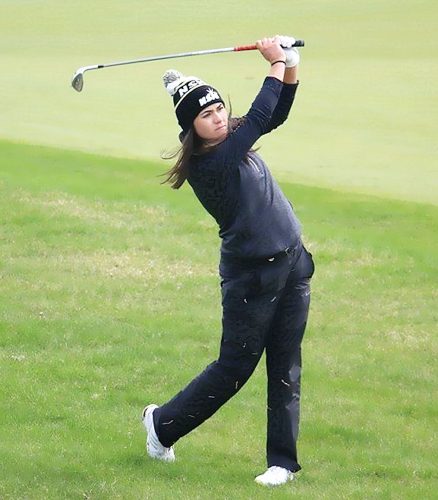