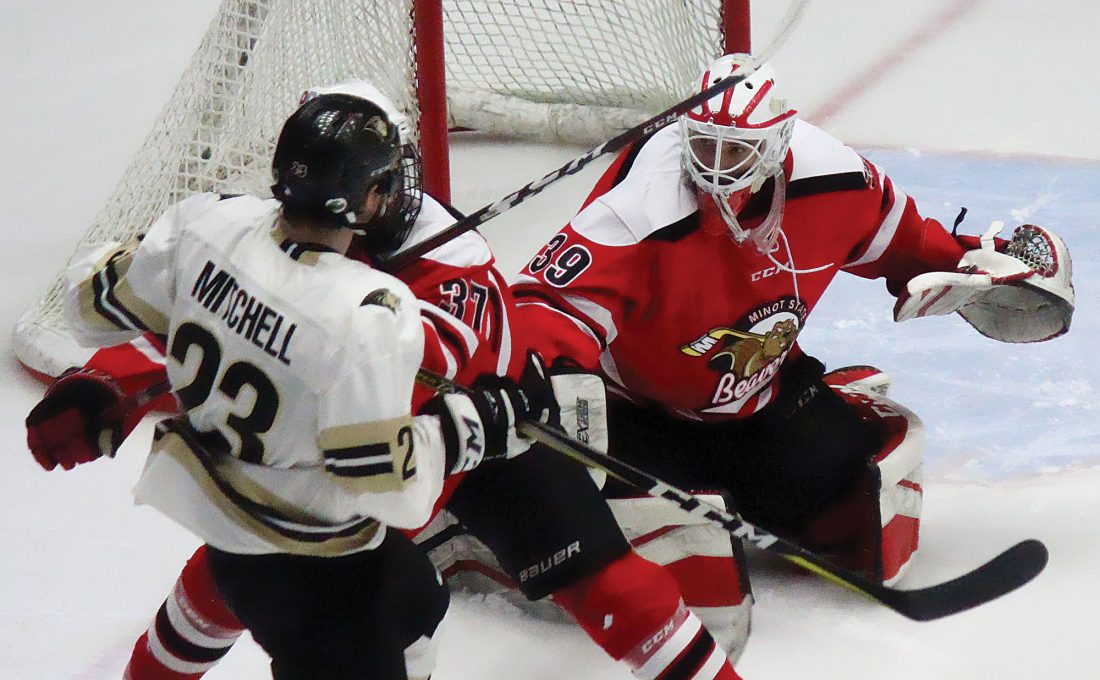 Joshua Bykowski always had to be ready for anything at a moment’s notice.

While watching the action unfold from the bench in the quarterfinals of the 2019 ACHA National Tournament, Bykowski was called into action.

Minot State starting goaltender Breydan Effertz went down with a pulled groin. His tournament was over, allowing Bykowski to take over between the pipes.

“I didn’t necessarily expect to play,” Bykowski said. “I was just taking things as they come, and being the best teammate I could in whatever role I had to play. Whether that was sitting on the bench and hyping the boys up or was in the net trying to be a steady Eddie back there.”

In relief, Bykowski stopped 10 shots in a 3-2 come from behind win for the Beavers over the defending champions Adrian College. 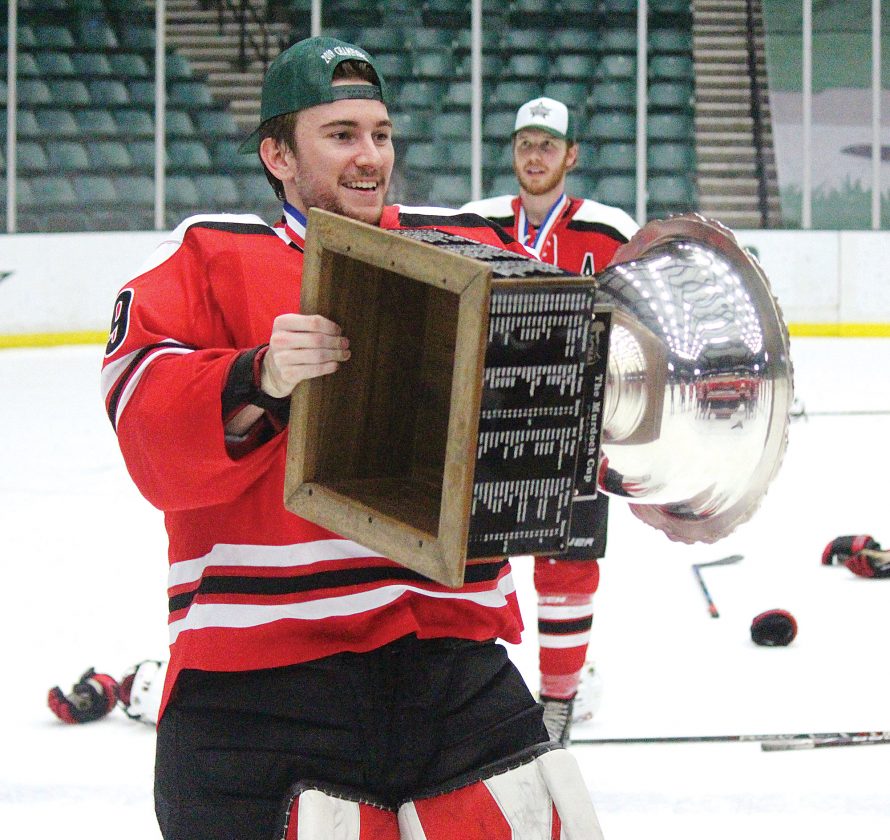 The next night, Bykowski blanked top-seeded Lindenwood with a sparkling shutout performance in the semifinals. Then, a day later, Bykowski raised the Murdoch Cup by only allowing one goal in the national title game.

Bykowski went from being the back-up goalie to a championship-winning goalie in three wild days. A classic storybook ending.

But this wasn’t the end, as the junior netminder had one more year to go to conclude his legacy with the Minot State men’s hockey program.

The final season, however, left much to be desired. Bykowski’s encore performance was cut short due to the COVID-19 pandemic canceling the 2020 ACHA National Tournament.

In the face of unprecedented adversity, Bykowski remains himself.

“I think we would have done well in the national tournament, but, unfortunately, it got cut short for good reasons,” Bykowski said. “The world we are living in right now is kind of craziness. But I had a great group of guys to play my final year of hockey with. I wouldn’t change a thing.”

“I’m Canadian, so it’s almost a rite of passage,” Bykowski said. “My parents put me on skates when I was about 4 years old, and my dad was a goalie. So, I think that’s what drew me into being a goalie as well.”

Bykowski, a native of Vermilion, Alberta, bounced around with a handful of Canadian junior hockey league teams before heading stateside. He had stints with the Wainwright Bisons (NEAJBHL), Whitecourt Wolverines (AJHL), Melville Millionaires (SJHL) and the Portage Terriers (MJHL) over a three-year span from 2013 to 2016.

Minot State head coach Wade Regier, through the advice of a scout, watched Bykowski play in Estevan at a regional tournament with the Portage Terriers. The Beavers, at the time, were desperately on the hunt for another netminder after starting goalie Connor Beauchamp decided to depart the team on short notice.

“At the end of nationals, (Beauchamp) decided to go back home for school,” Regier said. “I was like, ‘Thanks, why didn’t you tell me earlier?’ So now we had to start over from scratch, in April, and try to figure out how to do this.”

Bykowski happened to land right in the Beavers’ lap.

“At a Tim Horton’s (in Estevan), we had a good 45-minute chat,” Regier said. “I knew right then that this kid has really good character, is really smart and wants to play at the next level. The rest is history.”

Bykowski stepped in as a freshman and played right away. He split time in net with Holden Kurtz but got the nod to start when the national tournament came around. MSU reached the national semifinals.

“It was fun getting thrown into the fire like that,” Bykowski said. “It was nerve-wracking at first because I didn’t know anyone. But (Regier) reassured me that the boys would be welcoming, and they were.”

Despite Bykowski and Kurtz already competing for the starting gig on a nightly basis, another worthy contender emerged. Hometown hero Effertz, a former state champion with Minot High, joined the Beavers and made it a three-way competition for playing time.

Choosing who was going to start each game was a challenge.

“We had full confidence in everybody that we had,” Reiger said. “We were just going to ride that hot hand. Give everyone a chance to play throughout the regular season and then go with that hot hand when we got to nationals.”

Any hard feelings of having to sit out games wasn’t much of an issue. Everyone knew the situation at hand and put the team first.

Most head coaches would be worried if they had to call on their back-up goalie in the middle of a must-win postseason game. Not Regier.

“Not a single worry when Brey (Effertz) went down,” Regier said. “We knew Josh (Bykowski) was going to be ready to go and give us a chance to win.”

In an undesired situation, Bykowski was the perfect replacement for the injured Effertz in the 2019 National Tournament.

“Other goalies are almost psychotic in how they prepare with rituals and routines, but Josh’s calm demeanor is completely different from what you usually see,” Regier said. “But, it absolutely worked. He would go in and not overthink things or over analyze. He was going to play his style and play the cards he got dealt. To be completely honest, that’s the only way we win that national championship. It’s hard to replace a goalie mid-game. But, for Josh, he was the perfect goalie for that to happen.”

“(Bykowski) is one of the most decorated goalies in our program’s history,” Waselenchuk said. “So, to see him be the guy at the end of the day who got to throw off his mask after winning a national title is something I will always remember about him for sure.”

Bykowski’s senior season was more of the same: splitting time, making dazzling saves and helping the Beavers get back to the national tournament.

Then, on March 12, everything came crashing down.

Bykowski wouldn’t be able to bail the Beavers out of this global crisis. The coronavirus canceled the national tournament and subsequently ended Bykowski’s collegiate career.

“To have our season ended by the pandemic was tough,” Bykowski said. “But (the regular season) was still a lot of fun.”

The backbone of the Beavers’ defense will be taking his level-headed demeanor to law school.

“I’ve been accepted to a few different law schools, so I’m in the process of deciding which one I want to go to,” Bykowski said. “Trying to figure out which one is the best fit for me. But, obviously, I’d like to return to Minot State for the alumni games and alumni weekend.”

For MSU, everything comes full circle. The Beavers are back looking for another goalie to fill a glaring need. Just like they were four years ago when Bykowski was first brought in.

“With every goalie that we are talking to, it’s like, ‘Hey, the cupboard is completely bare. You are going to have the chance to start every night as a freshman,'” Regier said. “That’s huge leverage for us… But, it’s going to be a challenge to fill those two goalie spots. Off the ice too, (Bykowski and Kurtz) were both wonderful guys to coach.”

Bykowski will fondly look back on his time at Minot State.

“I have met lifelong friends — friends that I have no doubt will be coming to my wedding, and I don’t doubt I’ll be going to theirs,” Bykowski said. “The fraternity that comes with Minot State hockey and the community around it is next level. It’s something I’ll appreciate for the rest of my life.”

Off-field behavior will be decisive for MLB