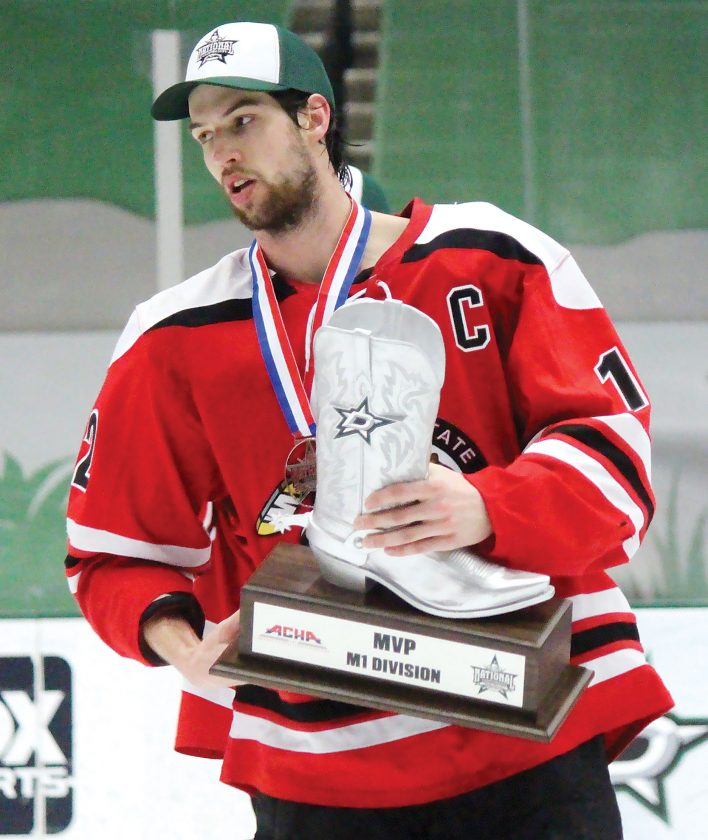 Alex Eisen/MDN Minot State men's hockey captain Blake Fournier holds onto the trophy he received for being named the MVP of the 2019 ACHA National Tournament at the Comerica Center in Frisco, Texas.

The invigorated Beavers waited patiently on the blue line with their arms interlocked across their shoulders as the ceremony commenced.

Before awarding the coveted Murdoch Cup to the Minot State men’s hockey team on the ice at the Comerica Center in Frisco, Texas, the American Collegiate Hockey Association (ACHA) committee had to name its MVP of the 2019 National Tournament.

Instead of sticking to traditional protocol and handing out the award to the player with the most eye-catching stat line, the ACHA — with some guidance from MSU head coach Wade Regier — recognized the importance of leadership instead.

“At the end of every day, the ACHA administration is like, ‘Hey, can you give us four or five guys you like that we should keep our eyes on,'” Regier said. “As the days rolled on, (ACHA Division I commissioner) Brian Moran would be shooting me texts in the hotel room asking me for any changes. I remember after we scored the empty-net goal (in the title game), (Moran) snuck behind our bench as our guys were getting all excited. He was confirming, ‘Hey, we are leaning toward Blake, are you good with that?’ I said absolutely.”

When Minot State captain Blake Fournier heard his name called, his head dropped in gratitude. His teammates erupted and celebrated for him.

Moments later, Fournier swapped out his new boot for the Murdoch Cup. This was the trophy he wanted to hoist and pass down to his teammates.

The junior captain had successfully led his team to the promised land.

Coming to Minot State was a rather easy choice for Fournier, a native of Maple Creek, Saskatchewan.

The ability to continue his schooling and play hockey at the same time was the primary priority. While getting to play with his older brother Craig Fournier was the main selling point.

“Made it easy on the family, that’s for sure,” Blake Fournier said. “It was kind of a no-brainer for me. We played a little bit together growing up, but having that opportunity to play with him at this level was really cool for myself and him.”

Blake and Craig hadn’t played together on the same team since their Pee-Wee hockey days roughly 10 years ago.

“It was pretty special,” Blake continued. “A lot of the time over those two years (with Minot State), we were linemates. I enjoyed every moment of it.”

MSU featured three sets of siblings on the 2016-17 men’s hockey roster with the Fourniers, Dylan and Jeremy Johnson, plus Lyndon, Kyle and Bryce Lipinski. A family environment all around.

“Character is contagious,” Regier said. “When you bring in a lot of good character guys, then that spreads throughout the locker room. And that’s how it was with these brothers.”

While learning how to balance school and hockey as an incoming freshman, Fournier also found it hard to secure a spot in the Beavers’ lineup. Spots were limited.

“Coming from juniors, where I was a go-to guy, to not playing as much was a little bit difficult,” Fournier said. “But, it helped me in the long run.”

The 2017-18 Minot State Beavers put together one of the most impressive regular seasons in the program’s history. Fournier was merely a reliable cog in a fine-tuned machine.

MSU steamrolled its way into the national tournament with a 36-2-1 overall record and earned the No. 1 overall seed for a third season in a row. The Beavers outscored their opponents 213 to 50.

“That group of seniors was special, and they showed us younger guys how to go about our business,” Fournier said. “Unfortunately, we couldn’t get the job done that year.”

Despite the regular season domination, MSU’s aspirations of winning the program’s second championship abruptly ended in the national semifinals.

Fournier was named Minot State’s next captain by his peers and coaches to kick off what was supposed to be a rebuilding season.

The Beavers, as expected, started slow with a new cast of main characters. MSU found themselves slipping down the rankings fast.

“We had a huge eye-opener when we lost to Utah, and we were ranked 18th around the Halloween mark,” Fournier said. “At that point, we were out of the tournament. But we had that fight to get back in the mix.”

MSU regrouped and climbed back up to secure the No. 6 seed for nationals. Everything started to click and fall into place.

Against the odds, the Beavers swept a four-day gauntlet in Frisco, Texas, which included a past postseason foe and three teams that were seeded higher than them.

Fournier scored MSU’s only goal in a 1-0 win over No. 1 Lindenwood in the semifinals and then netted a crucial first-period equalizer in the national championship game against No. 5 Iowa State. He was also a vital member of the Beavers’ penalty kill that didn’t give up a power-play goal for the entirety of the national tournament (13-for-13).

“We changed up our systems to have an extremely aggressive kill, and it paid off for us,” Regier said. “(Fournier) was the catalyst for that.”

MSU topped Iowa State, 3-1, to claim another Murdoch Cup. The relief of past season’s heartbreaks was palpable.

“The way everyone bought into their roles, and how we took over that tournament is something I will never forget,” Fournier said.

From underdogs to defending national champions, how the tables had turned. The Beavers were back to being the team everyone wanted to beat.

Leading by example, Fournier put together his best statistical season with MSU by ending the regular season with 21 points (11 goals, 10 assists).

“Expectations were crazy high coming into this year,” Fournier said. “It was another up-and-down year with some tough losses early. But we caught fire around Christmas before hitting another lull. We got through a four-game losing streak. Situations like that only make you stronger as a team. Coming down the stretch, I thought we were playing our best hockey. We were going to be right there at the national tournament once again.”

Then came the news everyone feared. The ACHA canceled the national tournament due to the COVID-19 pandemic.

“It’s disappointing, mostly because of the unknown and that helpless feeling,” Fournier said. “Devastating that we weren’t able to go to the tournament, but obviously we understand the whole situation.”

Unlike most winter student-athletes in this unforeseen predicament caused by the coronavirus, Fournier has been left with a choice.

ACHA Division I men’s hockey grants a fifth-year of eligibility, stating that a student-athlete has five calendar years in which to play up to five seasons of competition. Following those guidelines, four of MSU’s seven seniors have the option to come back.

“I’m not the type of coach that will overpressure any of my current players,” Regier said. “We want them all back, of course. But, in the same breath, if they decide they want to pack it in and finish their schooling. We totally respect that as a program.”

Fournier will be coming back to Minot State in the fall to finish up his student teaching. So, he will be around, which leaves the door open for a possible return.

“The way this season ended leaves a tough taste in your mouth,” Fournier said. “It’s still pretty fresh right now, so it’s one of those things where I have to make a few decisions. Since there is a fifth-year option, it’s definitely in the back of mind for sure. I’m not saying it’s 100% right now. But, since I have to finish up some schooling, it’s not 100% out of the question either.”

Whether or not Fournier decides to hang up the skates, he offered this advice to the next Beaver who gets to carry on the tradition of wearing the ‘C’ on his jersey.

“You are chosen for a reason, so don’t change who you are,” Fournier said. “Keep doing what you are doing, and I know whoever it is will do a heck of a job.”

Also, in this challenging time, Fournier conveyed this final message.

“Thank you to the whole city of Minot and to our fans for the amazing support — not only through this year but over the course of my four years,” he said. “Stay safe through these tough times, keep healthy and I’m looking forward to seeing where the Beavers hockey program goes from here. The pieces are in place to raise the cup once again and bring another banner back to Minot.”