Rugby BBB rolls past Berthold in Region 6 first round 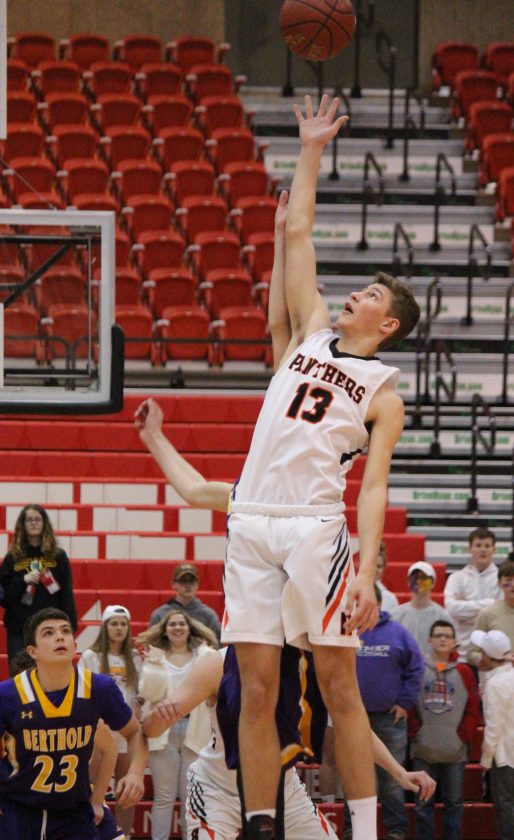 Alex Eisen/MDN Rugby senior Jaden Hamilton (13) wins the opening tipoff of the Region 6 BBB Tournament Monday evening inside the Minot State Dome. The Panthers beat the Lewis & Clark-Berthold Bombers 71-36 in the first round of the regional tournament.

The No. 3-ranked Rugby boys basketball team heated up in the second quarter, and the rest was history.

The District 11 top-seeded Panthers improved to 20-2 overall with a lopsided 71-36 win on Monday over District 12 No. 4-seeded Lewis & Clark-Berthold (13-10) in the opening round of the Region 6 Tournament.

“It was good to come out and have the first half that we had,” Rugby head coach Mike Santjer said. “I thought our defensive intensity was good, and it kind of rattled them a little bit. We got out and got some transition points and settled in a little bit.”

Both teams used the first quarter to shake off the nerves of playing in a must-win postseason contest inside the Minot State Dome.

Berthold limited Rugby’s high-powered offense to 12 points in the first quarter, but only managed to muster five points themselves.

The Bombers struggled to get penetration inside and turned to sharpshooting sophomore Jacob Gunderson to hit from the outside to keep them close.

Gunderson went 3-for-3 on 3-pointers in the first half.

“First quarter, I don’t remember what the score was, but we had them right where we wanted them,” Berthold head coach Christopher Brown said. “But, once they got going, we tried timeouts and switching some things (to slow them down). Kudos to them. Well coached, and they’re going to be a hard out for anybody.”

Rugby’s athleticism was too much to handle. Eventually, the ticking time bomb went off, and the Panthers’ offense exploded against the Bombers.

A breakaway dunk by junior Cole Slaubaugh pushed the Panthers’ lead to 26-13. Then, senior standout forward Jaden Hamilton (20.8 PPG) pulled up for a 3-pointer in transition to increase the deficit to 20 points, 33-13.

“I think we tired them out a little bit,” Santjer said. “We preach that we want to be in the best shape out of any team we play. We try and play fast because we have kids who can hit the transition threes.”

Continuing to push the tempo and force the action, Rugby was up 56-26 after three quarters.

Rugby senior guard Devan Michels led off the fourth quarter with a flashy breakaway dunk and then an offensive rebound tip-in on the Panthers’ next possession.

The mercy-rule running clock was in full effect.

“It was nice to see everybody feeding the ball,” Michels said. “Everybody did their job tonight, and we played the way we wanted to. We got the job done.”

Leading 65-30 with five minutes remaining, the Panthers turned to their bench to close out the 71-36 win.

“Once we play at the speed we want to play at, then we are confident that we can play with anybody in the state,” Michels said.

Rugby advances to the Region 6 Tournament semifinals to face District 11 No. 3-seeded Nedrose at 6 p.m. this evening.

The season comes to an end for Berthold.

Junior forward Walker Wold (23.5 PPG), who was guarded tightly by Hamilton most of the afternoon, finished with 17 points on 7-for-17 shooting. Gunderson added 11 points and didn’t make a triple in the second half.

The Bombers will graduate one senior, Jericho Limke, who didn’t play on Monday due to a concussion.

“It was a sad way to see him go,” Brown said about Limke. “We are going to lose a lot of leadership, and he always brought a lot of hard work and effort. So, we are going to have to replace that somehow.”