Editor’s note: Due to the COVID-19 pandemic suspending national and local sports until further notice, the Minot Daily News sports department would like to use this unprecedented time to gather and share some memorable sports stories that have impacted you, our loyal readers. Click here for more information about this new initiative.

Email your submissions to sports@minotdailynews.com.

On the road to making the Dakota Bowl at the end of the season, the Des Lacs-Burlington football team opened the 2016 season with a 33-32 home win against Stanley/Powers Lake.

The Lakers made two separate defensive stands to keep the Blue Jays out of the end zone with six minutes remaining.

The first stand came inside DLB’s 10-yard line, as SPL didn’t have a kicker to utilize. Then, DLB forced a three-and-out with less than a minute to play to pick up a heart-racing, season-opening victory.

“They made some big stops,” DLB head coach James Johnson said. “Stanley had some success running the ball on us and, at certain points in the game, we made some big plays. I’m really proud with how our boys hung in there.”

Armstrong timed his takedowns to perfection, but a clasping penalty cut his lead down to a single point going into the third round. Battered and bruised, Armstrong rode out the rest of the match like a champion.

Kelby Armstrong joined his older brother Brody Armstrong as Minot’s only individual champions in the 2017-18 state meet. Brody finished off a historic three-peat.

“A lot of hard work, a lot of hours, a lot of early mornings, a lot of cutting weight, a lot of everything,” Kelby Armstrong said. “I’m just happy and thankful.”

District 12 champions Bishop Ryan knocks down nine 3-pointers to topple Drake-Anamoose, 59-37, in the opening round of the Region 6 boys basketball tournament inside the Minot State Dome.

The Lions went 5-for-12 from deep in the first quarter. Only two of Ryan’s shots in the opening eight minutes came from inside the arc.

Jacob Bohl and Ben Bohl combined for 28 points, and Cody Feist added a dozen for the Lions. Gavin Kite (14) led Drake-Anamoose in scoring.

“We are a team that really likes to go inside-out,” Ryan head coach Brock Teets said. “And tonight we were going outside-in… Don’t get me wrong, we like shooting the three. But, we weren’t getting the type of threes that we like to get — rhythm type of threes. We had a chat at halftime and did a better job of getting the ball inside in the second half.” 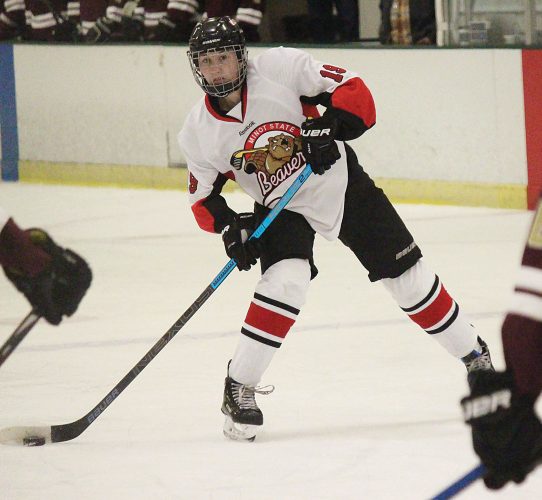