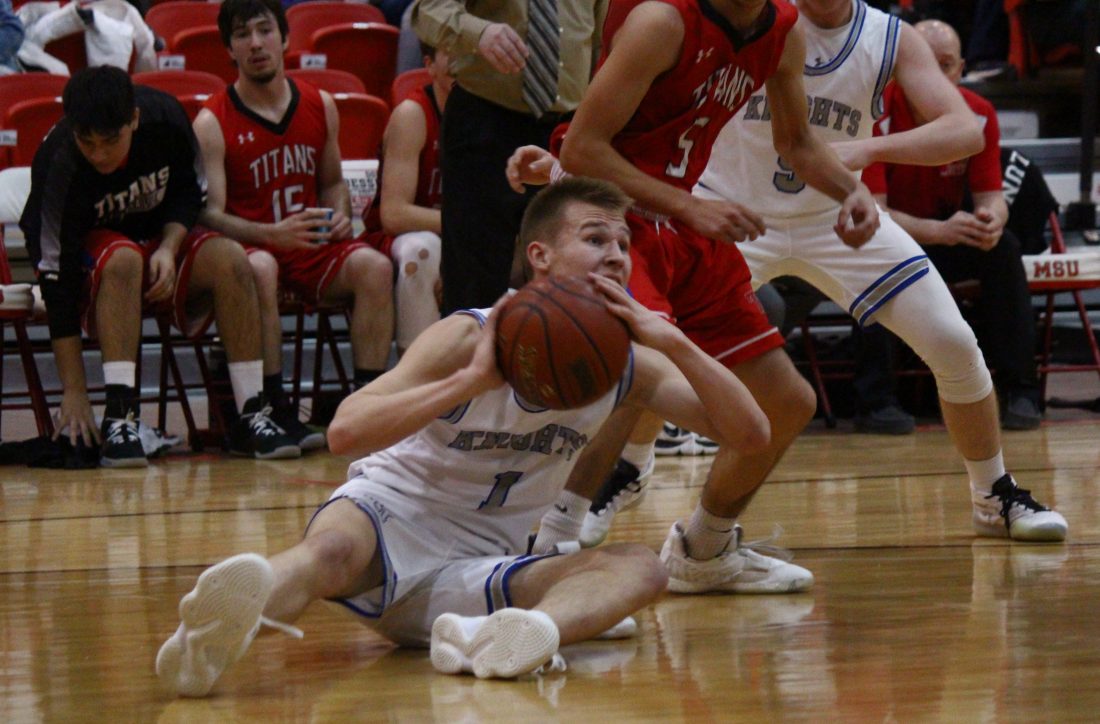 Alex Eisen/MDN Our Redeemer's junior guard William Sanders looks around to make a pass Monday evening in the opening round of the Region 6 Tournament. The Knights won 54-46 over TGU inside the MSU Dome.

Back on Feb. 11, Our Redeemer’s coasted to a 66-40 home victory over Towner-Granville-Upham. The Titans had no intention of letting that happen again.

District 11 No. 4 TGU (9-13) gave the District 12 champion Knights (18-5) everything they could handle Monday evening in the first round of the Region 6 boys basketball tournament. The valiant effort, however, wasn’t enough.

ORCS outscored TGU 35-25 in the second half to capture a 54-46 win inside the MSU Dome and reach the regional semifinals for a seventh straight season.

“Every game in the regional tournament is not going to be easy, no matter who you’re playing,” ORCS head coach Brody Bosch said. “We knew we were going to get TGU’s best. We thought we were ready, but they brought more energy than us right away.”

A bad omen or merely bad luck, ORCS gave TGU the first points of the game when Landon Lang tipped a rebound into his own basket.

“Unfortunately, it was a perfect tip for them,” Bosch said.

The upset-minded Titans scored the first six points and held a 15-8 lead after the first eight minutes.

“I’d say some of us were nervous,” ORCS guard Coltan Francis said. “We had some jitters that we had to get out of our system.”

Seven straight points by the Knights had the score tied again at 15-15 early into the second quarter.

ORCS briefly took its first lead, 19-18, after Zach Hendrickson made a layup.

Yet, TGU was up two, 21-19, at halftime following a bucket inside by Jordan Stone and free throw made by Bryce Latendresse.

Titans junior guard Cy Luna clanked the front iron with a running 3-pointer at the buzzer. Luna, TGU’s leading scorer (18.3 PPG), finished the first half 2-for-11 shooting but was all over the floor contributing in other ways.

“They worked as hard as they possibly could,” TGU head coach Wade Schock said. “We go in most nights giving up a couple of inches here and a couple of inches there. We have to work like crazy to get some boards. Tonight, we did everything we could except a couple of times we got those (offensive) rebounds and didn’t get the putbacks. Maybe then the game is a different story.”

Luna opened the scoring in the second half with a triple. Then, he drained another one to force an ORCS timeout with 4:49 left in the third quarter. The Titans held a 27-21 lead.

The Knights regrouped and ripped off an 11-2 run to close out the quarter. Lang had a string of five straight points, and William Sanders buried a 3-pointer.

“We needed somebody to set up and make some energy plays by getting on the floor and taking some charges, and tonight that was Will Sanders,” Bosch said. “He got our energy back… I think that was the switch that turned everything around.”

The closest TGU got in the fourth quarter was four points at 43-39 and 48-44. The Knights made enough pressure-packed free throws down the stretch to seal a 54-46 victory.

“It’s win or go home,” Francis said. “You have to play your best basketball.”

Luna finished with a team-high 17 points on 7-for-27 shooting. Cody Frounfelter nearly had a double-double with 9 points and eight rebounds.

“We work on that all year because we are usually shorter than other teams,” Schock said.

Scoring for the Knights was spread out with Sanders (14 points), Lang (14) and Hendrickson (12) in double figures. Lang also grabbed 11 rebounds to secure a double-double.

“We just had to get back to what got us here,” Bosch said. “There is a target on their backs, and this isn’t going to be a walkthrough. Every team we play, we are going to get their best. We have to be ready for that.”

ORCS will take on District 11 No. 2-seeded Drake-Anamoose in the Region 6 semifinals at 7:30 p.m. this evening. The two teams haven’t played each other this season.

It’s the end of the line for TGU. The Titans graduate two seniors: Jared Lovro and Stone.

“I told them yesterday at practice, ‘If you walk off the floor with your head held high because you did everything you possibly could, then that’s a victory,'” Shock said. “I think we did that.”