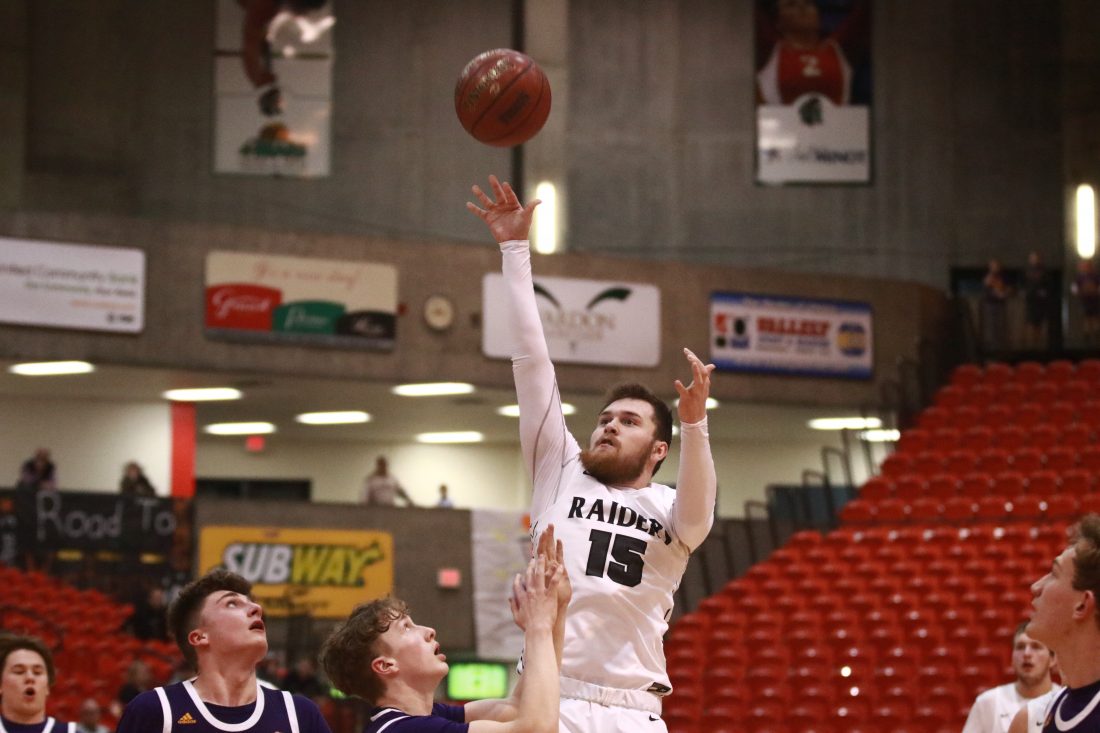 Jimmy Lafakis/MDN Drake-Anamoose junior forward Jaylee Brandt takes a shot in the second half of Monday's Region 6 Tournament game against Bishop Ryan at the MSU Dome. The Raiders captured a 56-54 victory over the Lions.

The final game of Monday’s Region 6 Tournament opening-round action exemplified the thrill of Class B basketball.

In a win-or-go-home situation, Drake-Anamoose junior guard Payton Martin delivered the goods in a 56-54 win over Bishop Ryan. Martin made two critical 3-pointers down the stretch to help the District 11 No. 2-seeded Raiders (17-6) take down the District 12 No. 3-seeded Lions (12-11).

“If he gets hot, he gets hot,” Drake-Anamoose head coach Doug Martin said. “He’ll make them from 10 feet behind the line, wherever he shoots from. It’s usually what happens.”

The three-point shot became the difference in the contest. Drake-Anamoose held an early 20-11 lead, but Ryan’s barrage of triples gave the Lions a 35-28 advantage before halftime.

The Raiders did not lie down. After starting the second half on a positive note, Drake-Anamoose rode its momentum into the final quarter. The undersized Lions played a zone defense, and the Raiders worked the ball to the open spots.

With 5:28 to play, the score was tied at 47-47. Ryan freshman forward Brady Feller hit some key shots, but the Raiders responded.

“It was fun,” Payton said. “We kept moving the ball around, and my teammates kept passing me the ball. I was shooting, but we were still playing as a team. All the shots went in at the end.”

No shots were bigger than the junior’s two 3-pointers in the final moments. After bringing the score to 53-51, Payton gave the Raiders a 54-53 lead with another trey.

Drake-Anamoose banded together after those shots. After rising to several offensive occasions, the Raiders flexed their defensive muscles.

“We play a lot of basketball together,” Payton said. “We play over the summer all the time. It’s pretty much 24/7.”

Feller gave the Lions one last glimmer of hope with his last-second heave from just past halfcourt in the closing seconds. The shot had enough arc, but glanced off the rim.

Sticking to this season’s theme, the Raiders completed another comeback victory.

“We’re pretty much a fourth-quarter, second-half team,” Payton said. “We get down by a lot, but then we put the press on. Then, we start getting going fast. That’s when the ball starts going in.”

Five of Payton’s six 3-pointers came in the second half, and he finished with a game-high 21 points. Jaylee Brandt (12 points) and Hunter Fletschock (10 points) also provided valuable contributions.

Logan Merck and Feller scored 15 points apiece for Ryan, while Conner Thompson added 14 points. The Lions will return their core next year, as this season’s roster did not field any seniors.

“We talked about the growth from the start of the year until the end,” Ryan head coach Jeremy Feller said. “We made a lot of strides with this young crew. Not a single kid came back with a role that they had last year.”

Drake-Anamoose has not appeared in the state tournament since 1982. Additionally, the regionals semifinal round marks rarified air for the Raiders.

Drake-Anamoose will advance to a semifinal contest against District 12 No. 1-seeded Our Redeemer’s at 7:30 p.m. this evening.

“We’ve been down in games by 19, 15, but these kids come back,” Doug said. “They won’t quit. They just keep fighting. They fight until the end.”