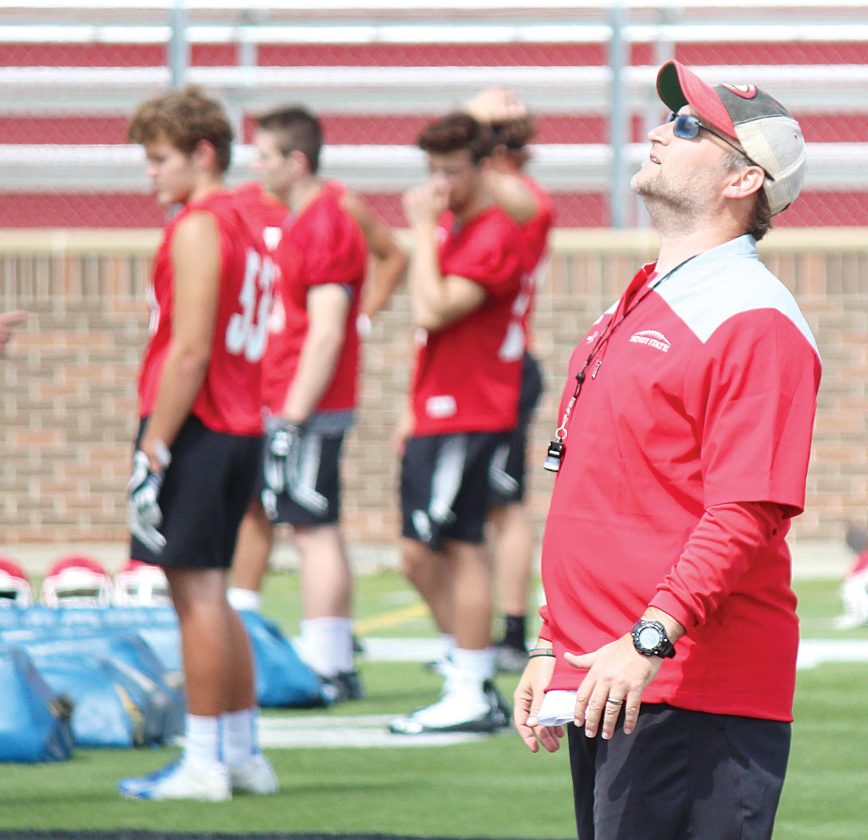 Mike Aldrich is entering his fourth season as the Minot State football head coach. Aldrich and the Beavers are currently navigating a canceled spring season and a recruiting dead period due to the COVID-19 pandemic.

The Minot Daily News spoke with Aldrich on Thursday afternoon about a variety of different topics. Some responses are edited for brevity and clarity.

MDN: What’s life been like for Mike Aldrich these last couple of weeks?

MA: Well, obviously, with all of the uncertainty surrounding everything that’s going on, it’s been a matter of keeping organized with our players. We got 100 guys that are all over the country — back home now — and we are trying to keep them abreast of what is going on.

During spring break for them, that’s when school got pushed back, and then it was all going to be online for the rest of the semester. They had to get moved out of the dorms. So, we had to manage that and help them with that process.

Within that came the football side of it. Spring ball got pushed back and then canceled. So, now it’s a matter of how can we come up with creative ways to still get the football development stuff that you normally get in the spring? How can we do that without being with our guys?

It has to be more of a virtual learning environment.

MDN: What has that communication been like with the team?

MA: It’s been good. Everybody is hunkered down where they’re at. We had a couple of guys who weren’t going home for spring break, so they were here. But then it went to online, remote learning and they ended up going home.

Now, it’s just staying with them. Not just me as the head coach, but all of our coaches staying on top of their guys, constantly staying in the communication window with them.

I think the biggest stock that you could buy right now is in Zoom. That has been pretty priceless for us.

MDN: What was recruiting like before the NCAA enforced the dead period?

MA: For us, prior to (the dead period), we had a few guys that we were chasing down. We got them signed right before the deadline. We have also had a couple of guys commit since the dead period ban came in. So, it’s a matter of keeping them informed, like we aren’t sending you a scholarship because we can’t. Not because we don’t want to.

The recruits understand. And I’m still talking to this current class, and they know what the situation is.

For us, we haven’t really started ramping up for our spring recruiting for next year’s class. That is what probably is going to be affected the most. Typically in May, our coaching staff is all out on the road recruiting. Right now the ban is until April 15, so we could go out after that point. But, you’ll be hard-pressed to find a school in the country that is going to have students on campus. Even if they do, how open are they going to be to having coaches from different places come into their schools?

So, I don’t think this spring recruiting is going to be like it has been.

It’s going to be a case of what can we do in the virtual world?

For example, we do junior visit days, and we aren’t going to be able to do that now. How can we bring a junior visit day to the recruits? So we are developing a virtual junior day and trying to be creative.

MDN: Looking ahead to when you can return to playing football again, what are some of the long-term consequences caused by this long layoff?

I keep telling the guys that no matter who wins the conference this year, no one had spring ball. We are all in the same boat together.

I look back in the olden days in the early 90s — when I was playing football and playing Division III — we didn’t have spring ball.

So, yeah, we are missing it, and it stinks. But, on the same token, everybody is.

I hope what doesn’t happen is they will say let’s make up for it by extending fall camp by a couple of weeks because that would be padding to the grind. For us at Division II, we don’t have bye weeks. So, when we play, it’s start to finish. There is no downtime.

This is still a liquid situation and we will find out what they’re going to allow when we get back to normal.

We aren’t going to be up at our top readiness as quickly because we are missing out on a month of football in April.

MDN: Coming up on your fourth season at Minot State, marking the longest tenure you have had as a head coach, can you believe how fast time flies?

MA: No, I can’t. It’s crazy to think that we are already into year four.

We have had some ups and downs, and that’s normal. But — to say we are at this point — this is probably the most optimistic that we have been. With the team that we have coming back, we are still relatively young.

We are still trying to play some catch-up for all those lost recruiting classes from 4-5 years ago.

But, it has been nice to have that stability.

MDN: When did you realize you wanted to be a football coach?

MA: I think it truly donned on me in college my junior year. I remember in high school that I would find myself doing a lot of play diagrams while I was in class. As people doodled, I was doodling football plays.

But, yeah, in my junior year in college, I decided to change my major to be a social studies teacher, and I also wanted to be a coach. I started to go down that track and seeing things a little bit differently than just being a football player.

MDN: Who do you think is the most improved player that you have coached from the first time you saw them to when they left the program?

MA: Here at Minot State, you are saying?

MA: Hmm. I think probably the easiest one to say is a guy I recruited and coached my last two years at Augustana: C.J. Ham.

To see him be a Pro Bowl fullback in the NFL and making millions of dollars now after sitting down with him through the recruiting process, that’s probably the biggest step up from high school senior to playing in the NFL for four years.

Here at Minot State, I would say a guy who is going to be a senior this upcoming year: Sebastian Gutierrez.

He was a tight end, and we transitioned him over to the offensive line. He has really started to blossom as an offensive lineman who has more of that tight end skillset. He is more athletic than your true O-line men.

MDN: Let’s end with this: What’s your vision for Minot State football over the next five years?

MA: I’m not Jimmy the Greek, so I don’t like to prognosticate. But, I think we are growing and taking the right steps. We aren’t trying to win everything right away. You have to set the foundation, or else the walls will fall down.

We knew last year that that recruiting class had to be special. When you are recruiting kids off a 1-10 season, you got to find some tough kids and kids that want to buy-in to changing the program.

That’s the class that is really going to be driving us forward to get us to where we are aiming for. Our first aim was to get to be the best of the worst. The second step is to get to the middle of the pack, where you are fighting to be over .500. Trying to fight those upper-tier teams and have good games against them to gain that confidence.

At the end of that class’s tenure, we would like to be competing with the big dogs. Try to start fighting for division championships, conference championships and those types of things.

So, it’s kind of going to go with how that class goes. We are excited about it. No doubt.