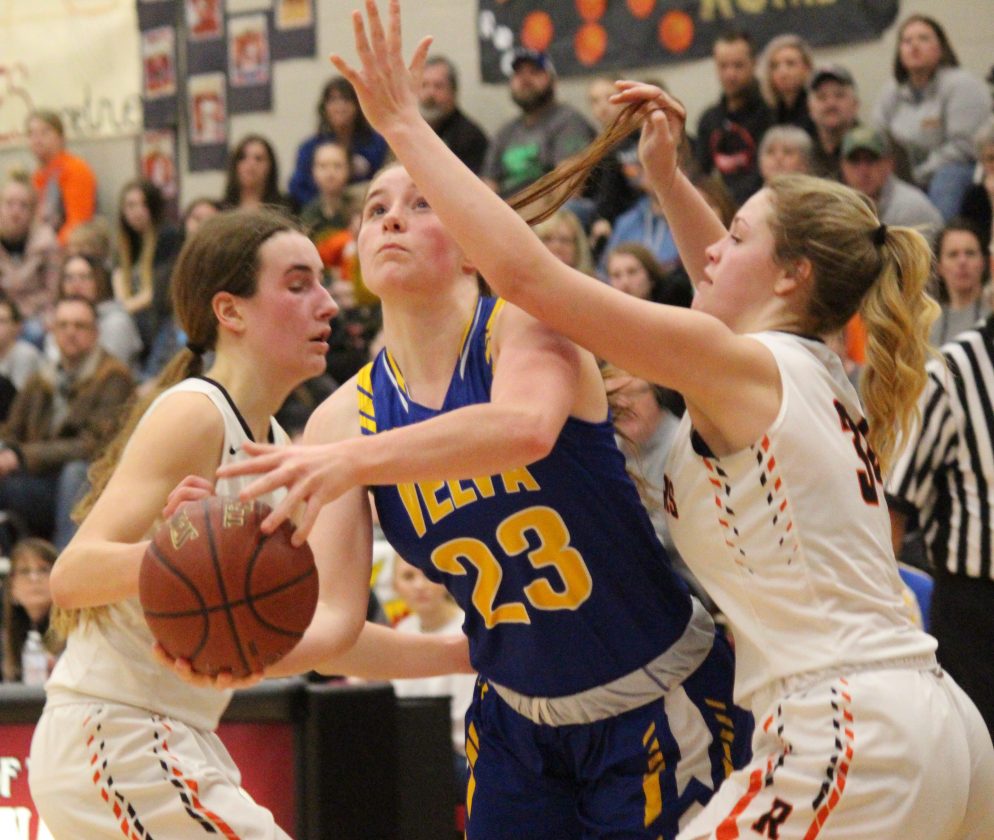 The old adage that “defense wins championships” is frequently overused. But, the sports cliché was validated once again Saturday evening at Nedrose High School.

In a defensive slugfest, the No. 2-seeded Velva Aggies (12-10) knocked off the No. 1-seeded Rugby Panthers (18-3) to win their second straight District 11 Tournament championship.

“Both programs preach defense, and everyone brought the defense tonight,” Velva head coach Chris Braaten said. “It was a challenge to get anything going consistently on offense. They gave us all we could handle, and we gave them trouble too. I knew it was going to be a fun basketball game like that.”

The Aggies held the Panthers to four points in the first quarter. Sarah Blessum made a pair of free throws, and Anna Johnson made her only field goal.

Velva freshman guard Olivia Passa countered with eight of her 13 points coming in the opening frame. Senior 5-foot-8 forward Kaitlyn added four points to give the Aggies a 12-4 lead.

Lund finished with a game-high 14 points. She was determined to make amends for Velva’s 45-40 loss to Rugby on Jan. 30.

“We have been preparing for them all season after we lost to them,” Lund said. “Our main focus was to get the district title. We were the underdogs, for sure. Everybody underestimated us, so I’m glad we could come out with the win.”

Braaten added: “Kaitlyn (Lund) just works really hard inside. She might be a little undersized, but man does she have a big heart. She plays big for us.”

Lund had to contend with Rugby forwards Brooke Blessum and Mykell Heidlebaugh.

Blessum was swatting away shots with venom like she was still in volleyball season trying to spike down kills.

Heidlebaugh was more active on the offensive end with a team-high 13 points. Sarah Blessum wasn’t far behind with 12 points in the contest.

All three of them — Brooke Blessum, Sarah Blessum and Heidlebaugh — were named to the All-District 11 Team.

Velva also had three selections for the All-District 11 Team with Lund, Passa and Madison Effertz.

“After the third quarter, we didn’t let them catch up to us too much,” Passa said. “We kept pressuring them with our defense.”

Rugby relied heavily on its full-court trapping defense to create chaos. The Aggies, for the most part, kept their cool.

“The last time we played Rugby, we had 33 turnovers, and I think we minimized them tonight,” Lund said. “We capitalized on the other end and got it done.”

Velva had a 10-point cushion, 40-30, in the middle of the fourth quarter. But, Rugby wasn’t going down without a fight.

Empowered by District 11 Coach of the Year Jen Brossart banging on the hardwood, Rugby rallied.

“We kept our composure,” Braaten said. “Defensively, we mixed it up a bit to keep them off-balance. But, I think (Rugby) just ran out of time there. They were starting to get hot toward the end. I just kept watching that clock.”

In the final minute, Lund made a difficult up-and-under shot in the paint to effectively seal the Aggies’ district title.

“It means a lot to the girls,” Braaten said. “The season that we have had hasn’t been a smooth road. We have faced stiff competition, and I think that has really helped us to develop the composure we needed for tonight’s game. Hopefully, going forward, we can keep pulling from those experiences that we had earlier in the season.”

Velva’s reward for winning the district is a Region 6 Tournament first-round date with Bishop Ryan on Feb. 24. The Aggies lost to the Lions at home, 46-44, on Jan. 7.

Rugby will get its mascot counterpart, the Glenburn Panthers, in the first round of the Region 6 Tournament.

In the earlier games played on Saturday at Nedrose High School, Westhope/Newburg and Bottineau also clinched its tickets to the regional tournament.

Triniti Soland (14 points) and Sabra Peterson (12 points) led the way for the Stars. Peterson and Morgan Haerer made the All-District Team.

Bethany Filler had a team-high 6 points for the Raiders. Riley Hauff was the lone Drake/Anamoose representative on the All-District Team.

TGU center Jaidyn Brummond, who was named the District 11 Senior Athlete of the Year, was the only Titan in double figures with 13 points.

Westhope/Newburg will get Our Redeemer’s in the first round of the Region 6 Tournament, while Bottineau will have to challenge District 12 champions Mohall-Lansford-Sherwood.