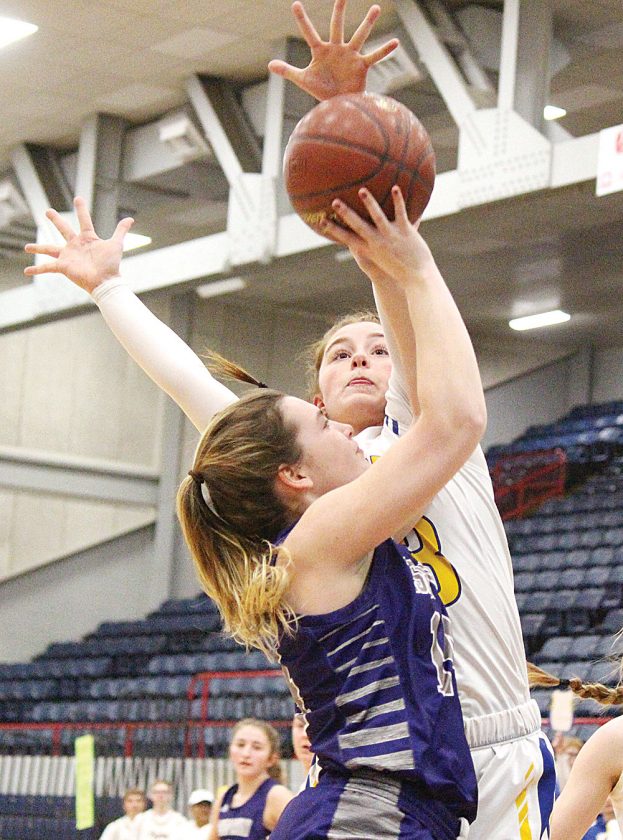 Alex Eisen/MDN Velva senior forward Kaitlyn Lund (white) comes over to block the shot of Bishop Ryan senior Grace Candrian (purple) in the first round of the Region 6 Tournament. The Aggies won 47-33.

Velva sophomore guard Jadyn Sandy hardly had enough time to even think about what she was doing.

“We had just put in a new play, and I knew I was going to get the ball,” Sandy said. “It was kind of instinct more than anything… It was a quick release. Catch the ball, high arch on it and put it in.”

The newly designed play worked to perfection, as Sandy got a wide-open look from behind the arc.

With 0.8 seconds on the clock, Sandy just shot and found the bottom of the net. The buzzer-beating triple to end the third quarter was the push the Aggies needed to close out the game.

The postseason result provided some sweet revenge after Velva lost to Ryan at home, 46-44, on Jan. 7 during the regular season.

“(Ryan) can shoot the ball very well, and the girls did a nice job of contesting their shots,” Velva head coach Chris Braaten said. “They hit one or two threes the whole game, and I’ve seen games where they hit eight or 10. That’s their bread and butter. Our girls took that away from them.”

It was the Aggies (13-10) who came out shooting and hit a pair of 3-pointers early on — much to the delight of their vocal student section.

Velva, however, didn’t find a lot of breathing room on the scoreboard until the last couple of minutes of the half.

Freshman guard Olivia Passa provided a spark. She stole a pass at midcourt and delivered a textbook bounce pass in the point to give Sandy an easy layup.

Another bucket from close range by junior forward Rylee Frantsen gave the Aggies a 23-18 lead going into halftime.

“We really shut Ryan down and limited their three-point attempts,” Sandy said. “That was a huge key in defeating the Lions.”

Ryan head coach Roger Coleman agreed: “They limited our open looks, and even when we had an open look, they didn’t seem to drop. That’s just how it goes.”

Velva junior guard Madison Effertz opened the scoring in the third quarter with a triple. Effertz then picked up her fourth foul minutes later with 5:33 left in the frame.

Ryan went on a 5-0 run shortly after, which included a three-point play completed by Nora Kramer.

Kramer finished with a team-high 13 points for the Lions. Sydney Upton (9 points) and Sylvie Kramer (8) weren’t far behind.

“It was the first time in a long time that we couldn’t get shots to fall,” Coleman said. “When you aren’t hitting shots and giving them second-chance opportunities, it’s hard to win.”

The Aggies seized all of the momentum on the final shot of the third quarter. Sandy only received the opportunity to take the decisive 3-pointer because Ryan was called for a double dribble trying to line up a 3/4-court shot.

“Everyone is happy for Jadyn (Sandy),” Braaten said. “It’s one of those things where you just have to catch and go. That was a nice shot of adrenaline going into the fourth quarter.”

In the early stages of the fourth quarter, Passa blocked a 3-pointer, which turned into a Jade Lohnes mid-range jumper at the other end.

Coleman saw enough and called a timeout. Ryan now trailed 39-28 with 6:01 remaining. The Lions never got the deficit back down to single digits, and only scored four more points in the contest.

“We were patient,” Braaten said. “We took what was given to us (offensively). We moved the ball around and found the open girl.”

The Aggies will face District 12 No. 2-seeded Our Redeemer’s in the Region 6 Tournament semifinals at 6 p.m. this evening at the Minot Municipal Auditorium.

Ryan’s season comes to an end.

“We had a lot of fun,” Coleman said. “The improvement we showed. Go back and look at us mid-season on film — or even our record — many of those games were pretty ugly. We laughed about it every time at practice. So, a huge improvement. Credit to the girls for putting in work every day.”