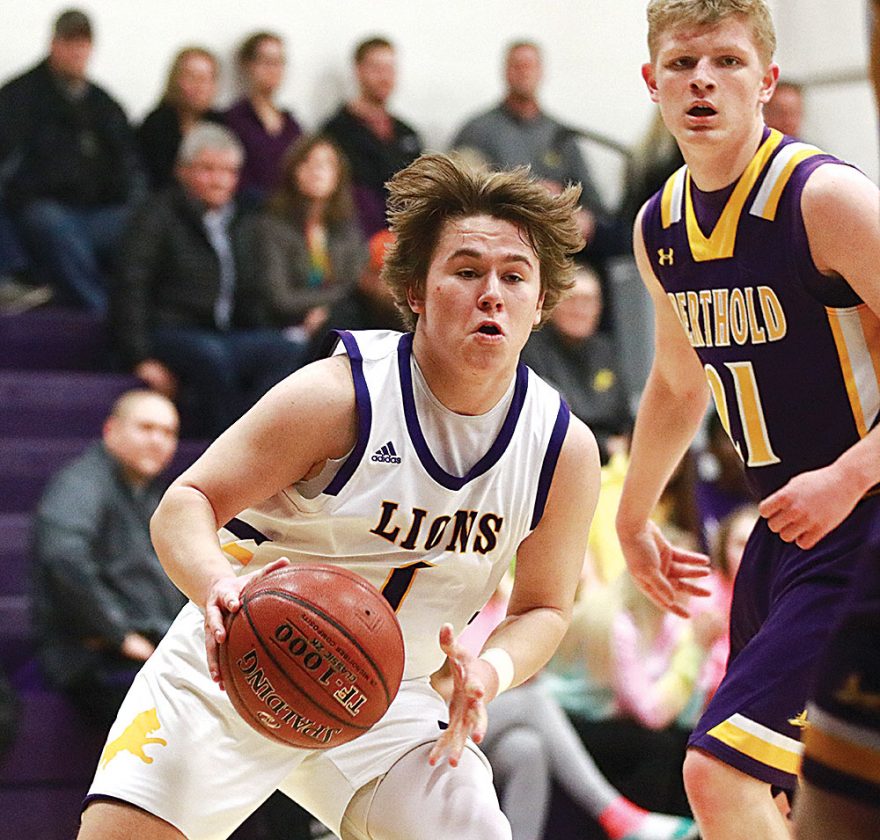 Jimmy Lafakis/MDN Bishop Ryan junior guard Logan Merck drives to the basket during the second half of Monday's game against Lewis & Clark/Berthold in Minot. The Lions earned a 51-32 victory over the Bombers.

The Bishop Ryan boys basketball team needed to iron out some first-quarter kinks.

Once the Lions (9-8, 4-3 District 12) settled down, Monday’s Class B contest against Lewis and Clark/Berthold (9-7, 2-5 District 12) shifted in Ryan’s favor. The Lions’ high-intensity defense paved the path to their 51-32 victory over the Bombers.

“You’ve just got to elevate your game one more notch,” Ryan head coach Jeremy Feller said. “The first quarter, it was okay. But it wasn’t as sharp as the next three. We’re getting closer and closer to being a complete, fourth-quarter team. If we want to try making a run at the district and winning at least two games to get to the next tournament, we’ve got to find a way to play four quarters. That was our message before the game, and I think that’s the closest we’ve been in a while.”

Berthold captured a 13-8 advantage after the first frame. The Bombers were dictating the tempo, and the young Lions searched for a momentum-shifter.

“We definitely got after it a little bit more,” Feller said. “We sped them up. I always tell our kids that the press doesn’t necessarily have to get a steal. Nine times out of 10, it’s going to be forcing them into a quick shot. I feel like we got them sped up enough. Better yet, the shot clock was down quite a bit. That helps you defend.”

The Lions held the Bombers to two points in the second quarter. Ryan held a 23-15 lead at halftime.

“It’s a mindset of taking what they give us,” Merck said. “If they give us a fast break layup, let’s take it. If not, let’s pull it out and execute a play. Making the extra pass, all that. Playing as a team. We’re at our best when we play as a team, move the ball and make the extra pass.”

Ryan kept rolling in the second half. The Lions hunted the transition opportunities and eventually triumphed.

“We’re still leaning on our defense,” Berthold head coach Cristopher Brown said. “Against a very good shooting team, holding them to 51 points was a decent job. We did a really good job on the rebounds tonight, but we just need to clean things up a little bit and take a little better care of the basketball. We’ve just got to find a way to put the ball in the bucket. Scoring 32 points, it’s going to be hard to beat a good team like the Bishop Ryan Lions.”

With the District 12 Tournament looming, both coaches offered their perspectives on this year’s playoff picture.

“I don’t think I’ll call any game an upset in this year’s tournament,” Feller said. “This is the most competitive I’ve seen it in probably 20 years. I think anyone can beat anyone. I don’t think the ‘upset’ word is going to be needed. It’s just going to be a tough district this year.”

Added Brown: “If you want some entertainment come a couple of weeks, get over to the (Auditorium). It’s going to be wild. It’s just going to be any given night. I’m looking forward to it. It’s great basketball. You just have to show up and play two out of three really good games. Then, you find yourself in the next tournament.”

Although Monday’s contest marked both teams’ final regular-season district game, the Lions and Bombers will hit the road this evening. Ryan will travel to Westhope/Newburg for a 7 p.m. contest, while Berthold will square off against Garrison at 7:30 p.m.