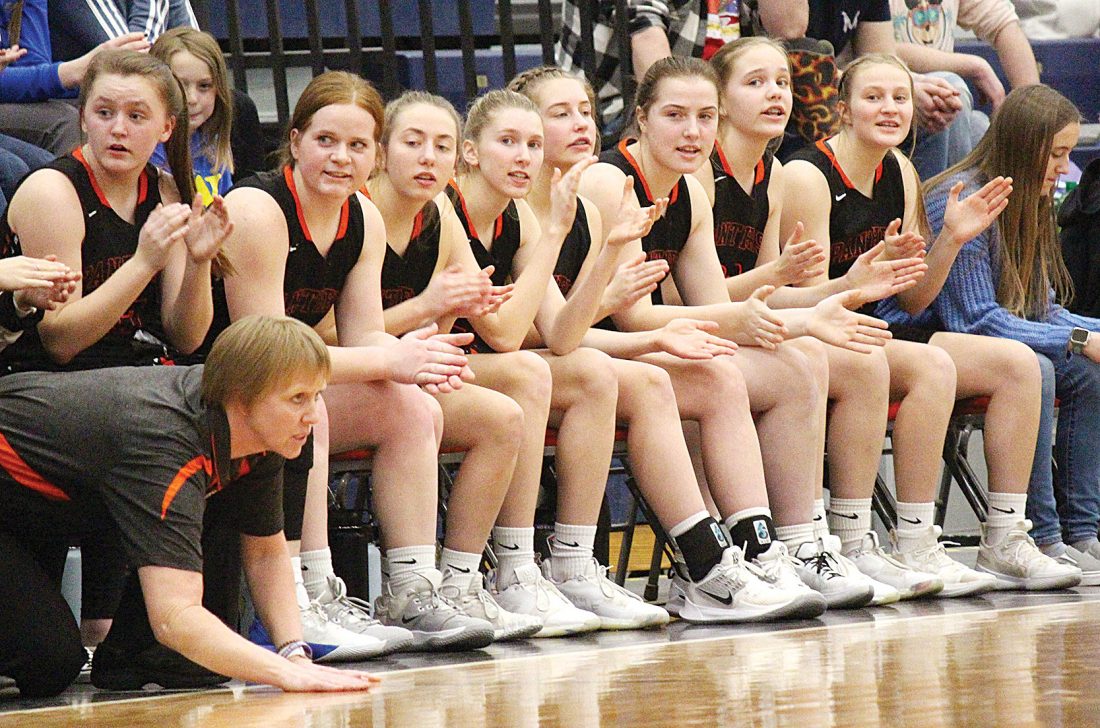 The only team to beat the District 12 No. 1-seeded Mohall-Lansford-Sherwood girls basketball team this season was Rugby. The thorn in the Mavericks’ side surfaced again in the Region 6 Tournament semifinals.

The District 11 No. 2-seeded Rugby Panthers (20-3) outscored MLS (22-2) by 13 points in the third quarter, 16-3, to break open a tight and physical postseason affair. Rugby won 55-41 to return to the regional title game for a third straight season.

“This feels great,” said Rugby junior guard Tesha Sobolik, who finished with a game-high 21 points with five made 3-pointers. “We knew MLS was some good competition, so we had to step our game up. Even though we beat them earlier, we knew we had both improved. So, we had to step up and play them better.”

For the Panthers, Tuesday’s win was a moment of bliss. For the Mavericks, a repeated nightmare.

“We have lost nine straight to that team,” MLS head coach Wayne Brackenbury said. “We haven’t beat them since 2014. (We) haven’t done it yet. We have played with them but, for whatever reason, it’s always been the third quarter. And we even talked about it at halftime.”

Even though Rugby is the two-time defending Region 6 Tournament champions, this group of Panthers had to form a new identity.

“These girls have battled all year long, and have lived the shadows of maybe last year’s team. And they don’t have to; this is their team,” Rugby head coach Jen Brossart said. “We lost four seniors last year, who were a big part of that team… So, yeah, it took us a while to find our identity. We had some scrapes and some dogfights at the beginning of the year. But, they stuck with it. It’s a testament to their work ethic. It’s not easy getting back to this championship.”

It was a stalemate entering halftime at 22-22.

“No, I’m a farmer’s wife, we are pretty tough,” said Brossart when asked if her hand hurt at all. “It gets the girls going, and I’m their biggest cheerleader, I guess.”

Rugby roared out of the intermission, scoring the first 10 points.

“Somebody had to step up, and our junior Tesha Sobolik went off,” Brossart said. “She carried the other girls, and they got on her back. She said let’s go and we did. We went on her rhythm. The other girls went after it. (Mykell) Heidlebaugh and Brooke (Blessum) started scoring. When you are going like that, the basket gets a little wider every time.”

MLS had no answer for Sobolik. She went 5-for-7 from behind the arc. Mykell Heidlebaugh also made two 3-pointers on her way to a double-double (16 points, 12 rebounds).

Rugby’s Brooke Blessum was a rebound shy of a double-double as well with 10 points and nine boards.

“Jen (Brossart) always says, ‘Just keep shooting them and have faith your shot is going to go in,'” Sobolik said. “Believe in yourself.”

“It’s the quarter in the last two years that we haven’t come out and played,” Brackenbury said. “First four minutes, they buried some threes. The three-ball has killed us all year long. (Sobolik) made 5-for-7 of them, and I mean buried them. It was like holy buckets.”

“The fourth quarter wasn’t so bad for us, but what do you do?” Brackenbury said.

Rugby gets a highly-anticipated rematch with Velva in the Region 6 Tournament championship game.

The Aggies bested the Panthers for the District 11 Tournament title a little over a week ago. Rugby wants some revenge.

“Oh, we want to beat them after losing in the district championship,” Sobolik said. “We want to get back to the state tournament.”

Rugby has ended Velva’s season the past two years in the Region 6 Tournament title game to reach the state tournament.

The third installment is scheduled for Thursday at 7:30 p.m. in the Minot Municipal Auditorium.