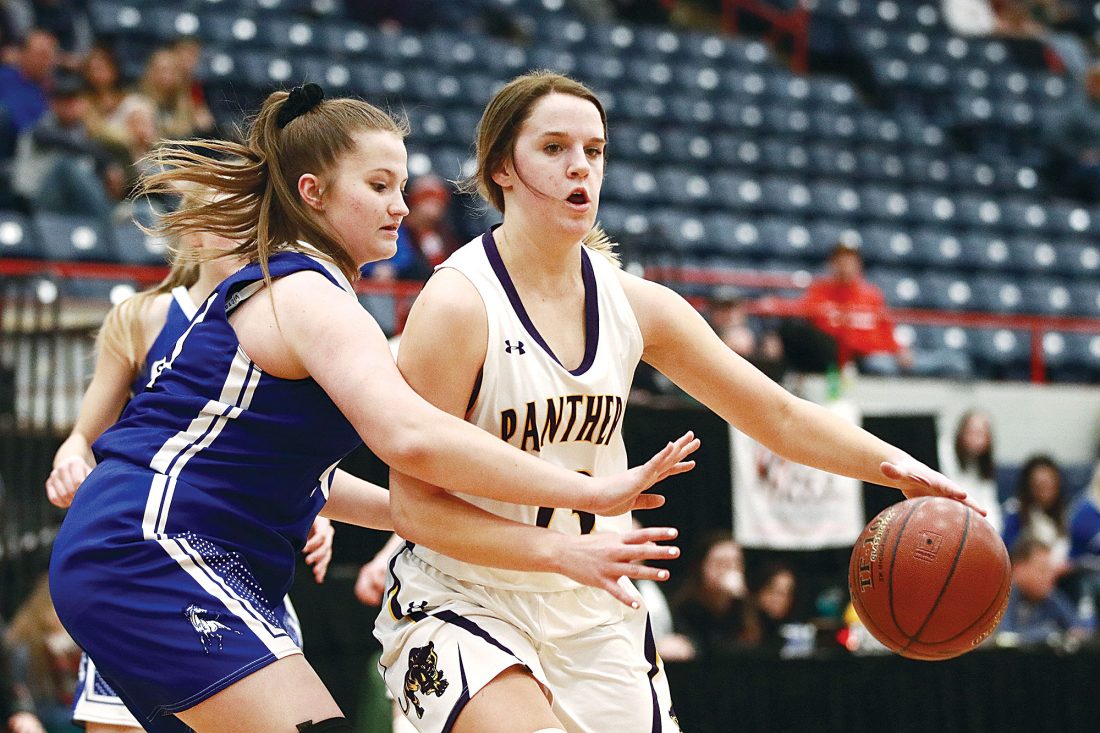 In the second half, the Glenburn girls basketball team flipped the switch.

The No. 3-seeded Panthers (15-5) rolled to a 68-48 victory over the No. 6-seeded Surrey Mustangs (8-12) in Thursday’s first-round District 12 Tournament game at the Minot Municipal Auditorium.

“The adjustments we talked about at halftime were definitely rebounding better in transition and not hanging around 90 feet away from the defensive end,” Glenburn head coach Jordan Pederson said. “Still in attack mode, trying to stay spaced in our zone offense a little more and create a few more shots around the rim. We shot really well from the free-throw line.”

The fast-paced first half proved to be quite competitive. Much to the delight of their respective fan sections, the Panthers and Mustangs traded baskets.

Glenburn held a slim 34-29 lead at the intermission. The Panthers hit some outside shots, but the Mustangs did not relent.

“We talked about how we needed to keep stretching,” Pederson said. “Every time (the lead) would get to five, I feel like (Surrey) got back. They stayed on topic, stayed on it and never really relaxed. It was good for them to play all four quarters and have to extend each quarter.”

The contest’s complexion shifted in the third quarter. The Panthers gobbled up loose balls and turned turnovers into points.

Nursing a 48-37 lead, Glenburn made an extra effort to penetrate inside for easy buckets. After settling for outside looks earlier, the Panthers’ paint prowess proved proficient in the latter stages.

The experienced Panthers eventually outlasted the young Mustangs and earned the win.

When Glenburn extended its lead, solid defense led to those game-defining baskets.

“We moved the ball really well,” McIver said. “We got it from inside to out… Our offense fell into place when we got our defense back up and going.”

Sophomore forward Lorelei McIver led the Panthers with a game-high 22 points. Junior forward McKenna Rolland contributed 15 points of her own.

The Mustangs will face Lewis & Clark/Berthold in a loser-out contest at 4:30 p.m. this afternoon, while the Panthers will square off against Our Redeemer’s in a 7:30 p.m. semifinal game.

“They’re a bunch of positive girls who are really enjoying playing together,” Pederson said of the Panthers. “They share the ball well and aren’t afraid to do what it takes to get the job done. They mesh really well. A lot of good attitudes there.”