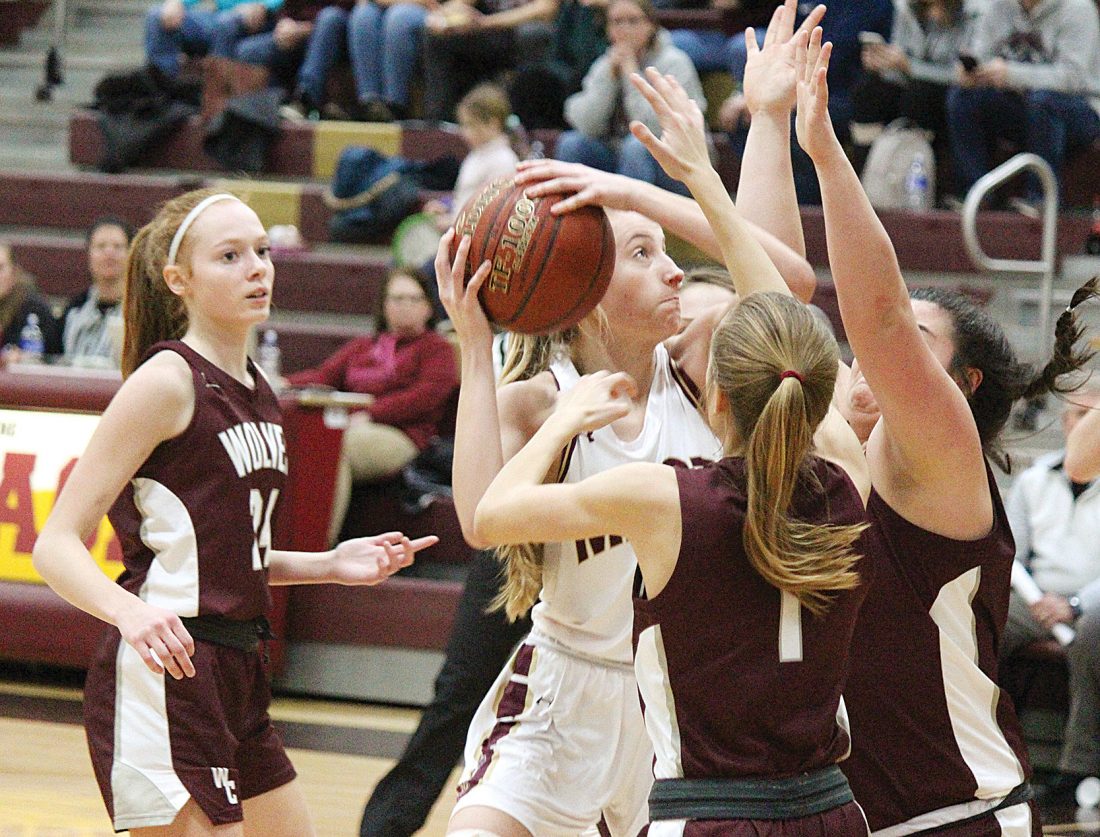 Nelson started the celebratory night off with an elbow to face and an ensuing bloody nose. The 5-foot-10 forward retaliated by scoring her 1,000th career point. Nelson’s milestone bucket put the Majettes up 42-41 with 10:24 remaining.

Nelson went on to drop a game-high 26 points in Minot’s final home game of the season.

Watford City, however, got the last laugh.

The Wolves (7-12, 6-12 WDA) knocked off the Majettes (9-10, 9-9 WDA), earning a 66-57 road victory, and ruining senior night for Nelson and the five other seniors on the team — Paige Rosencrans, Becca Tschetter, Landry Maragos, Lauren McLean and Tia Haskins.

“I watched and coached volleyball, and I’ve seen many nights like this where the other things are distracting,” MHS head coach Jason Schwarz said about falling flat on senior night. “I’ve seen this happen numerous times. We got distracted tonight. It’s a wake-up call for us. We have to be mentally ready to go. Every game.”

Minot’s biggest lead in the first half was seven points, 12-5, after a three-point play completed by sophomore Mariah Evenson.

Emma Mogen came through with her own three-point play for the Wolves to give Watford City a 28-27 lead.

The Majettes clung to a slim one-point lead going into halftime, 33-32.

“I think our defensive effort wasn’t what it has been in past games,” Nelson said. “I think we are known for our Majette defense, and we didn’t bring it here tonight. We have to regroup and be prepared to bring it every game from here on out.”

Nelson used a face-up post-move to notch her 1,000th point in the middle of the second half.

“It’s a really good feeling, but I’m just so happy my teammates are here to support me,” Nelson said. “I wouldn’t have this if I didn’t have them. I’m really thankful for them.”

The Wolves stretched its lead to 50-44 with 8:16 remaining. Nelson sunk a 3-pointer to get the Majettes back within three, 52-49. But, Watford City pulled away again.

“We took these guys way too lightly tonight,” Schwarz said.

Ashley Holen connected from deep to give the Wolves a 60-51 lead. She ended up with a team-high 22 points.

Minot went to a full-court press to create chaos. It worked for a little bit. Costly Watford City turnovers, plus buckets made by Lunde and Nelson, had the Majettes clinging onto some hope — down 62-57 with 50.4 seconds left.

Nonetheless, the Wolves hit free throws down the stretch. Jessica Mogen and Hayley Ogle withstood the pressure at the charity stripe.

For Minot, Evenson (15 points) was the only other Majette in double figures besides Nelson. Tschetter and Lunde each finished with 7 points.

“This night came together to mean a lot of different things,” Nelson said. “I was on the ropes to score my 1,000th, senior night and a lot of emotions running high. Watford played a really good game. They came and they attacked it. We just didn’t come prepared.”

Schwarz added a parting comment on his six seniors: “You aren’t going to have a crew like this too often, where you bring six of them up as freshmen, and they spend all that time with you… They have always played really well together and they work their butts off. You’ll get a lot of things done when you do those two things together. They’re great examples for our younger kids.”

The Majettes close out the regular season with two road games against Dickinson at 6:45 p.m. Friday and Bismarck Century at 7:30 p.m. on Feb. 25.

The WDA Tournament will be held March 5-7 at the Bismarck Civic Center.