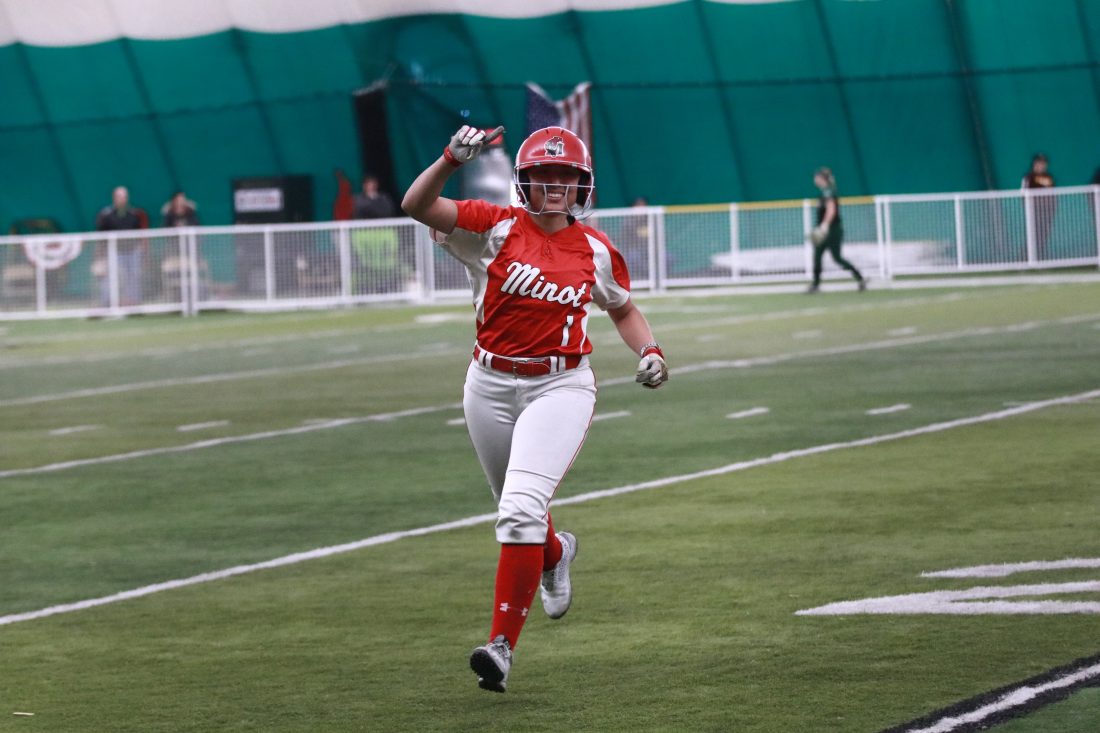 After finishing 2-3 in the Desert Stinger Tournament in Las Vegas, the Minot State softball team defended their home turf with a 12-6 victory over Bemidji State Saturday afternoon.

MSU (3-3) and Bemidji State (0-2) are NSIC rivals, but this game did not count in the conference standings. BSU held an early 2-0 lead after three innings, but MSU responded with a four-run fourth frame in its first air-supported tournament of the season.

“I’m learning strengths and weaknesses,” MSU first-year head coach Nat Wagner said about the Beavers. “We’re learning about individuals in terms of their capacity. Power, speed, things like that. We’ve done a lot of mechanical adjustments in the offseason. Really, until you get out to games, you don’t find out what’s worked and what hasn’t. We’re still probing and experimenting all the time.”

BSU countered with a solo shot in the fifth inning, but MSU broke the game open in their half. Lauryn DeGuzman and Zoya Robbins rifled a pair of two-run RBI doubles.

After Robbins helped her cause, the starting pitcher scored on a Jamie Odlum single. Mercer came home after a throw to second base, and the Beavers held a 10-3 advantage.

“More than anything, I think that we’re fighters,” Robbins said. “The best part is, whether we’re down by four or up by two, we never give up. We just always want more. We want more runs. It’s never enough.”

Although BSU had a large hill to climb, the Beavers chipped away at the lead. Three runs in the top of the sixth inning pushed the score to 10-6.

Cabral responded with a long bomb to the outfield. After Kiera Shwaluk knocked in a run with a single, the score held at 12-6 for the rest of the game.

“As far as starting lineups and things like that, I think we have a pretty good sense of who we want where,” Wagner said. “It’s more about how aggressive we can be with certain runners. Who’s going to make adjustments against certain pitchers, things like that. That’s what we’re finding out on a daily basis.”

Robbins tossed six innings and allowed nine hits. All six of her runs were earned, but she struck out four BSU batters.

“I usually am pretty comfortable with the defense behind me,” Robbins said. “A lot of my movement pitches weren’t really working, so I was just relying on my fastball today.”

MSU’s Monica Rivera surrendered one hit in one inning pitched.

Black Hills State University defeated MSU 5-4 in the second game of Saturday’s doubleheader. Although MSU enjoyed a comfortable margin in the BSU matchup, Black Hills State used some extra-inning dramatics to knock off the Beavers.

The eight-inning contest saw BHSU take a 4-1 lead after three innings. DeGuzman’s second-inning RBI single served as the Beavers’ only tally for the first three frames.

DeGuzman, Julia Suchan and Hernandez all tacked on RBI singles in the next three innings. With the game knotted at 4-4 in the eighth inning, Kindall Bethke delivered the final blow.

The Beavers will host Minnesota Crookston at 3 p.m. on Sunday.