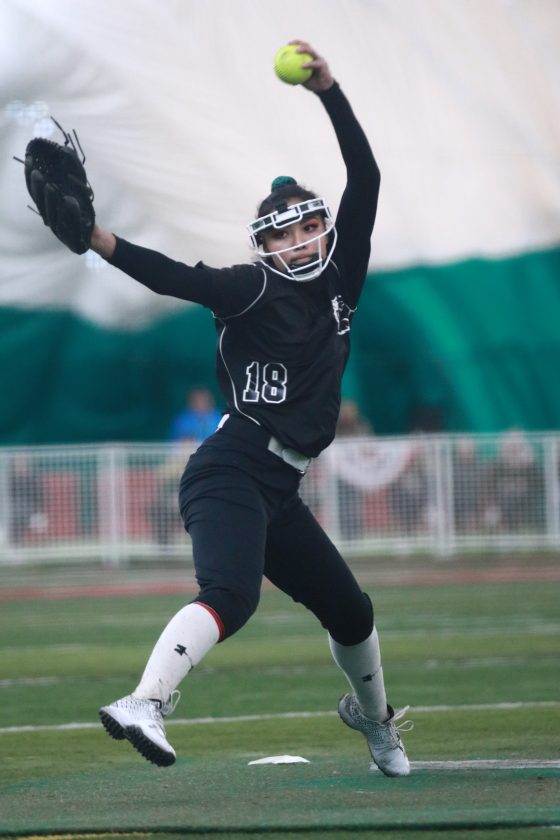 When the going got tough, Haley Hernandez wanted to have fun with her softball teammates.

The junior catcher helped Minot State (4-4) to a 4-3 win over Minnesota Crookston (2-1) in Sunday afternoon’s contest. Twists and turns were abound in the finale of MSU’s initial air-supported tournament.

“We’re goofy individuals,” Hernandez said. “When we have a laugh and have fun, we end up scoring the most runs. Our energy is very contagious. We create a lot of new chants whenever we have the chance.”

MSU played as the guests on the scoreboard. After two innings without a run, the Beavers struck first.

Jazmin Karagunan came home from third base after an errant throw to second. That run proved to be the difference in the game.

The Beavers tacked on three more runs in the fourth inning. Zoya Robbins lifted a deep two-run triple, and Karlee Coughlin brought her home on a single.

Although the offense did enough for the win, the Beavers needed some help from their pitching and defense.

“Today, our pitching bailed out our offense,” MSU head coach Nat Wagner said. “We had a lot of runners in scoring position, bases loaded, no one out. We hit three dribblers in a row. It’s not typical of us, but in the past, our offense has kind of bailed out our pitching. It was nice to see those tables turned.”

The Beavers faced some adversity, as the Golden Eagles capitalized on an opportunity in the fifth inning. With one mighty swing of the bat, Crookston’s Cassie Querry got those three runs back.

Pitching in relief, Robbins settled down and did not allow a run for the rest of the game.

“That was good for our confidence in the circle,” Wagner said. “(Robbins) pitched really well today. She just executed a lot of good pitches and set us up for success.”

The basepaths proved to be another key ingredient in the Beavers’ victory. MSU swiped seven bases as a team.

Robbins (3-2) earned the win, while Crookston’s Paige Pitlick (0-1) was tagged with the loss. After Saturday’s standout performance against Bemidji State, Robbins struck out seven and did not walk any batters.

“I was keeping my hips low,” Hernandez said about catching Robbins. “And I was making those balls look like strikes.”

MSU closed out the tournament with a 2-1 record. The Beavers and Golden Eagles will meet again at 10 a.m. on Saturday, Feb. 22, in another MSU air-supported tournament.

“It’s a chance to go back and get healthy,” Wagner said. “A lot of flu is going around this week. We’ll get all the wheels turning again and get back to work. Swinging mechanics, thinks like that. Things you see crop up. Now, we have a little bit of time and space to deal with it.”

A recap of Saturday’s MSU softball games can be found on minotdailynews.com.