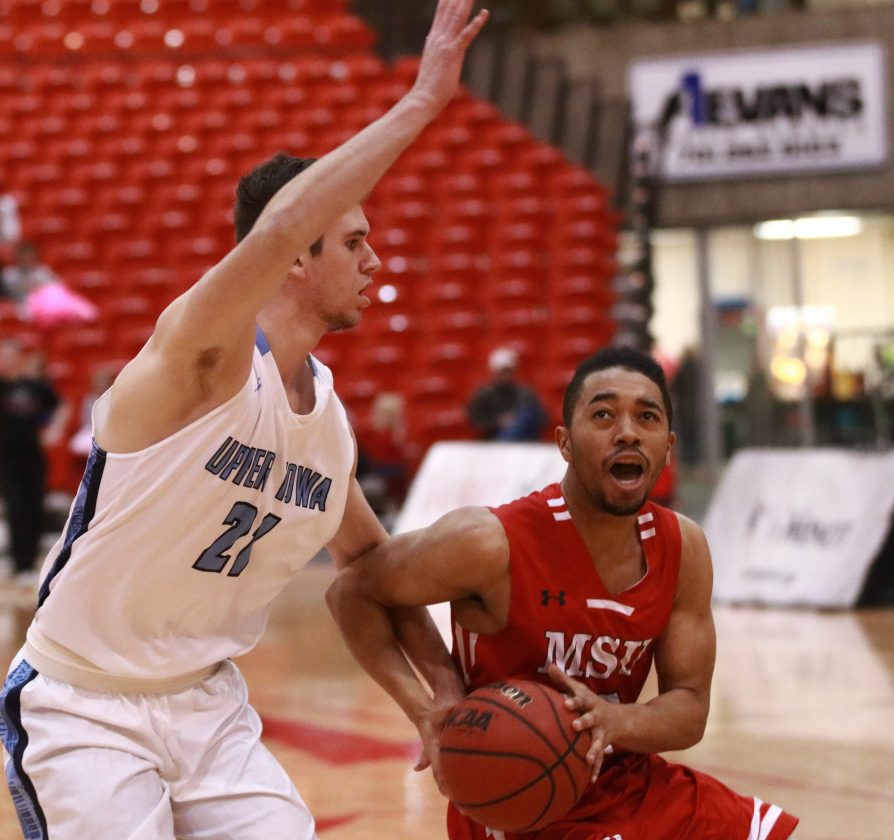 Jimmy Lafakis/MDN Minot State freshman guard Kobe Jackson (right) weaves his way around Upper Iowa forward Dylan Jones (left) during the first half of Saturday's game at the MSU Dome. The Peacocks earned a 94-71 victory over the Beavers.

The Upper Iowa Peacocks offered a challenge to the Minot State University men’s basketball game at the onset of Saturday evening’s game. Upper Iowa wanted to stretch the floor, and the Peacocks dared the Beavers to try and stop them.

“I think we’ve grown in a lot of ways since early in the year,” MSU head coach Matt Murken said. “I think we’ve become more consistent on both ends of the floor. We’ve settled into our roles a little bit better. Unfortunately, we didn’t see a lot of that tonight.”

Upper Iowa held a wire-to-wire lead in the affair. The Peacocks shot a robust 13-for-23 (56.5%) on their long-distance attempts.

“I thought our defensive execution and intensity really wasn’t where it needed to be tonight,” Murken said. “They really took advantage of that. They spread us out and made a lot of jump shots from the outside.”

“Our team is really good when we play a full, 40-minute game,” MSU freshman guard Kobe Jackson said. “We have patches where we don’t trust our system. A few times, we get down on ourselves. That’s when we go bad.”

Upper Iowa showed a penchant for hustling to the loose balls. The Peacocks established the rhythm and made the Beavers play at their pace.

“They want to play fast,” Murken said. “In our defensive transition, we didn’t get them slowed down. We need to control tempo more. We did not execute that very well. They scored a lot of two-on-one, three-on-one break situations before we got our defense back. That’s kind of step one. Step two is fighting through their ball screens when they spread you out. Their four guys who can shoot it combined for 11 threes. If they do that, they’re going to be really successful.”

After highlighting Saturday’s most important facet, Murken continued to reflect on potential improvements.

“If you feel like you can win the glass, you have a good opportunity to win the game,” he said. “They beat us on the glass, as well. When we did force misses, they were able to have more offensive rebounds than we had on our end. It’s a bad combination, those three things. It led to a lot of points for them tonight.”

The Beavers will play in two more home games next weekend. MSU will welcome Minnesota Crookston at 7:30 p.m. next Friday.